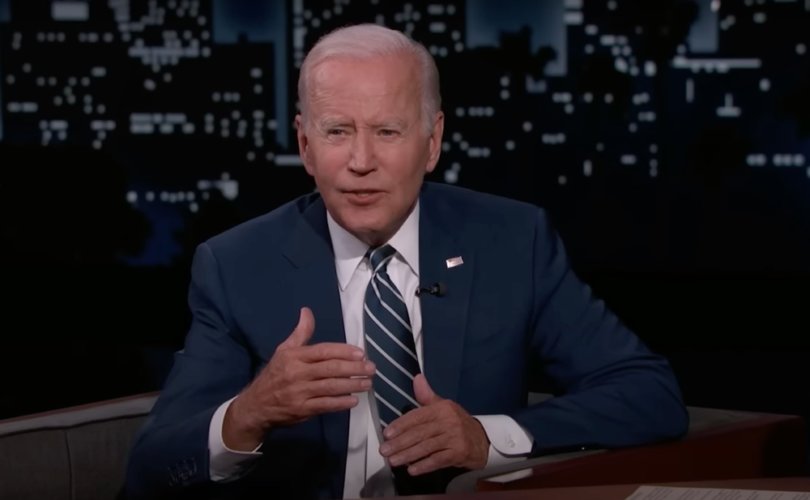 During a Wednesday night interview on “Jimmy Kimmel Live!” Biden said he is exploring potential executive actions which would ensure pregnant women are able to abort their unborn babies even if the federal “right to abortion” is overturned.

Politico noted that while the president can do little to stop pro-life states from enacting legislation to limit or outlaw abortion, the Biden administration could choose from a range of options to make abortions easier to obtain.

The outlet cited lawmakers and “abortion-rights groups” in noting that potential executive actions could include “making it easier to obtain abortion medication, protecting patient privacy and making sure more people can afford and access contraception.”

Earlier this week, pro-abortion senators wrote a letter to Biden with a list of demands regarding abortion access, Politico noted.

In the letter, senators asked the president to cut back FDA restrictions on abortion drugs, consider travel vouchers and additional support to finance travel from pro-life states to pro-abortion states so women can legally kill their unborn babies, and look into whether abortions can be performed on federally-owned property in pro-life states.

According to Biden, a Supreme Court ruling which protects the unborn could have serious consequences.

During the Wednesday interview, Biden told Kimmel that if the Supreme Court opts to overturn Roe, and if pro-life states move to limit or outright ban abortion within their borders, “it’s going to cause a mini revolution and they’re going to vote a lot of these folks out of office.”

Biden’s comments about “revolution” relative to the overturning of 49 years of abortion precedent came just hours after an armed man was arrested outside the home of Supreme Court Justice Brett Kavanaugh.

After turning himself in to authorities, 26-year-old Nicholas John Roske of Simi Valley, California, allegedly confessed he had wanted to kill Kavanaugh at least partially because he was “upset” that the Court might overturn Roe.

Last month, the Department of Homeland Security (DHS) raised the alarm about a likely escalation of violence, including attacks targeting Supreme Court justices, if the Court overturns Roe v. Wade.

Pro-abortion lawmakers have already responded to the Court’s potential overturning of abortion precedent by unsuccessfully attempting to codify abortion in federal law up to the moment of birth, while activists have engaged in protests outside the homes of pro-life Supreme Court justices and even vandalized pro-life centers and Catholic churches.

According to the DHS, the threats are reportedly “likely to persist and may increase leading up to and following the issuing of the Court’s official ruling.”