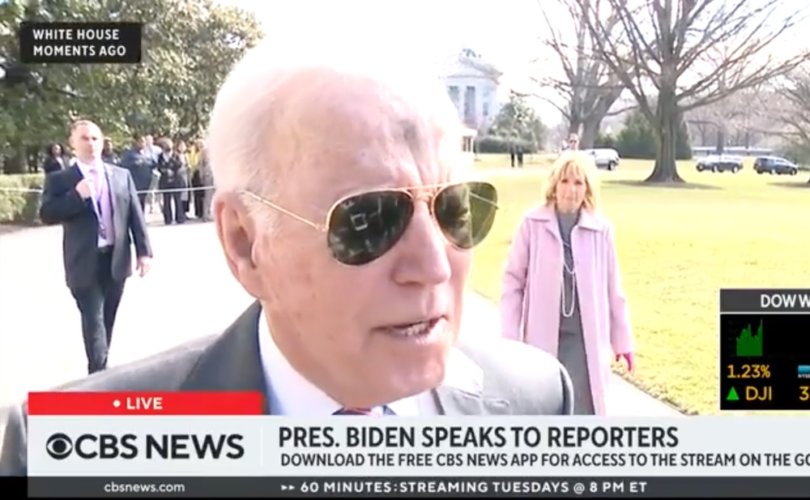 WASHINGTON (LifeSiteNews) — On Ash Wednesday, U.S. President Joe Biden, a self-professed Catholic, reaffirmed his support for Roe v. Wade and abortion when pressed by a reporter to explain why he defends abortion in contradiction of Catholic teaching.

“As a Catholic, why do you support abortion?” An unnamed reporter asked the president outside the White House on March 2, the first day of the penitential season of Lent.

Biden, who sued Texas over its life-saving Heartbeat Act, promised to codify Roe v. Wade into law and decried the possibility that the federal “right to abortion” could be overturned by the U.S. Supreme Court this year, declined to explain why he supports the legalized killing of unborn babies.

“I don’t want to get in a debate with you on theology,” Biden said, adding, “I’m not going to make a judgment for other people.”

“But you’re Catholic!” the reporter responded. The Catholic Church unequivocally teaches that abortion is a grave moral evil which no Catholic may support.

The president declined to comment further after First Lady Jill Biden approached and took his arm.

President Biden made the comments after having apparently just returned from Ash Wednesday Mass, as he bore ashes his forehead, the Catholic symbol of the mortality of man and the beginning of Lent.

REPORTER: “As a Catholic, why do you support abortion?”

BIDEN: “I don’t want to get in a debate with you on theology, but you know…I’m not going to make a judgment for other people.”

Biden’s refusal to explain why he has consistently backed pro-abortion measures and promised to fight protections for the unborn comes after he reaffirmed his commitment to upholding Roe v. Wade and protecting a “woman’s right to choose” during his Tuesday night State of the Union Address.

“The constitutional right affirmed by Roe v. Wade — standing precedent for half a century — is under attack as never before,” Biden said. “If you want to go forward — not backwards — we must protect access to health care. Preserve a woman’s right to choose. And continue to advance maternal health care for all Americans.”