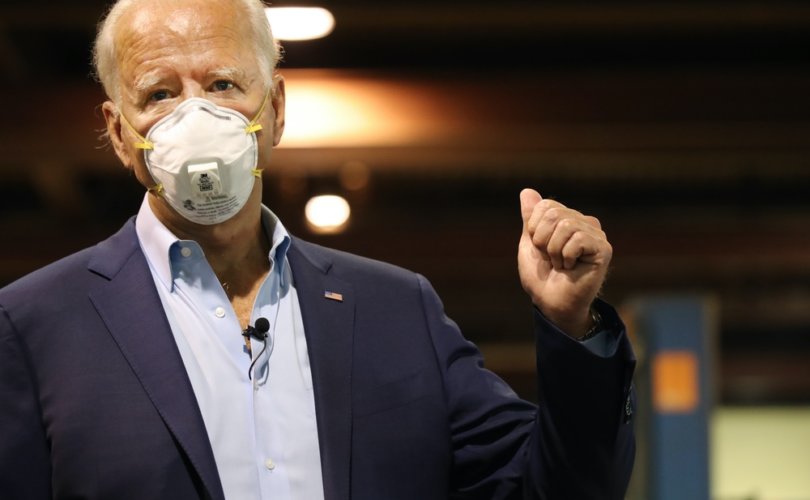 WILMINGTON, Delaware, July 30, 2020 (LifeSiteNews) – Pro-abortion Democratic presidential candidate Joe Biden said during a campaign event on Tuesday that he will announce his pick for vice president “in the first week in August.” The Democratic National Convention, where both Biden and his running mate will be officially nominated, is scheduled for August 17-20.

A number of candidates are in the running to complete Biden’s ticket, but Senator Kamala Harris (D-CA) seems to emerge as the frontrunner, just days ahead of the final decision.

Harris has been a U.S. senator since 2017, following her work as California Attorney General for six years. She ran for president herself, but withdrew from the race in December, before the start of primary season.

Like Biden, Harris is staunchly pro-abortion. During a debate on October 15, 2019, she said, “Reproductive healthcare is under full on attack in America today. There are states that have passed laws that will virtually prevent women from having access to reproductive healthcare.”

“It is not an exaggeration to say women will die, poor women, women of color, because these Republican legislatures who are out of touch with America are telling women what to do with our bodies,” she claimed. “People need to keep their hands off of women's bodies and let women make the decisions about their own lives.”

Harris boasts a 100 percent rating of the pro-abortion Planned Parenthood Action Fund for her strong support of abortion.

Additionally, Harris promotes homosexuality and gender ideology. She wrote on her campaign website, “We must speak truth: Homophobia and transphobia are real in this country, and they’re being fueled by an Administration that openly attacks Americans based on who they are or who they love.”

“Kamala believes we also must fight for equality around the globe by making LGBTQ+ rights an integral part of our foreign policy approach,” the website added. “That starts with America living by the values we preach.”

Also on the list is Susan Rice, the former national security adviser of the Obama administration. She was never elected to public office, which means her positions on numerous issues are unknown, though it can be assumed she is as supportive of abortion as other candidates for vice president.

Senator Elizabeth Warren, who lost in the Democratic presidential primaries against Biden, would be another candidate who is pro-abortion, just like Senator Tammy Duckworth, Congresswoman Val Demings, and Congresswoman Karen Bass.

Stacey Abrams, former candidate for governor in Georgia, said in 2019, “Anti-abortion is not the will of the people.” She claimed that “[l]ess than 25% across the country believe that we should overturn Roe v. Wade, and yet in Kentucky and Ohio and Indiana and Missouri and Mississippi and Georgia and Alabama we see these [abortion] bans moving forward, and it is not a reflection of the will of the people.”

Both Governor Gretchen Whitmer of Michigan and Governor Michelle Lujan Grisham of New Mexico are pro-abortion.

Whitmer, who during the coronavirus lockdown called abortion “life-sustaining,” wrote on her campaign website, “As Governor I will continue to fiercely defend the rights of every Michigan woman, including for women’s access to all forms of reproductive care, contraception, and maternity care, paid family leave, and equal pay.”

Her full plan includes the objective of “[r]epealing the law that criminalizes abortion … [r]einstating funding for family planning … [e]nsuring access to abortion and contraception,” as well as more explicit sex education.

Whitmer’s coronavirus lockdown was one of the most draconian in the country.

Governor Lujan Grisham said in 2019 during her “State of the State” address, “The old criminal abortion law of this state, one of only nine left in the country, must go. Bring me that bill. I will sign it.”

No matter who will be his vice president, Joe Biden’s position on abortion is clear. In his “Agenda for Women” released on Monday, Biden said he “will work to codify Roe v. Wade, and his Justice Department will do everything in its power to stop the rash of state laws that so blatantly violate Roe v. Wade.”

Biden also mentioned his intent to repeal pro-life policies like the Hyde Amendment (which bans federal tax dollars from funding most abortions) and the so-called Mexico City Policy, which Trump has expanded and now calls Protecting Life in Global Health Assistance.

Tucker Carlson pointed out in his July 29 opening monologue that Biden’s running mate, if the Democrats take the White House, will be possibly the most powerful vice president in history, given questions about Biden’s mental lucidity and his promise that he would only serve one term.