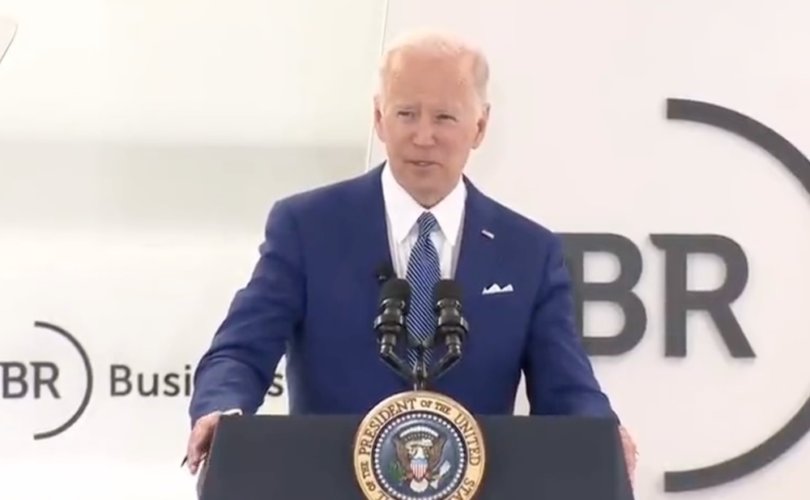 (LifeSiteNews) — U.S. President Joe Biden raised eyebrows Monday when he said that times had shifted and a “New World Order” is coming that the U.S. must lead.

Biden made the comments during Business Roundtable’s CEO Quarterly Meeting on March 21, noting that events currently occurring in the world have generated “significant opportunities to make some real changes” in the world economy.

BIDEN: “There’s going to be a new world order out there, and we’ve got to lead it.”

“As one of the top military people said to me in a secure meeting the other day, 60 million people died between 1900 and 1946 and since then we established a liberal world order and that hadn’t happened in a long while,” Biden said.

“A lot of people died, but nowhere near the chaos. And now’s the time when things are shifting. We’re going, there’s gonna be a new world order out there and we’ve got to lead it and we’ve got to unite the rest of the free world and doing it,” the president added.

During the same meeting, Biden said U.S. intelligence sources have reason to believe Russia is planning a cyberattack against the United States.

“Today, my administration issued a new warning that, based on evolving intelligence, Russia may be planning a cyberattack against us,” the president said. “As I said, the magnitude of Russia’s cyber capacity is fairly consequential, and it’s coming.”

During a press conference Monday, Deputy National Security Adviser for Cyber and Emerging Technology Anne Neuberger also spoke about the potential for such an attack, urging “private sector partners to take immediate action to shore up their defenses against potential cyberattacks.”

“The Russian government is exploring options for potential cyberattacks on critical infrastructure in the United States,” Neuberger said.