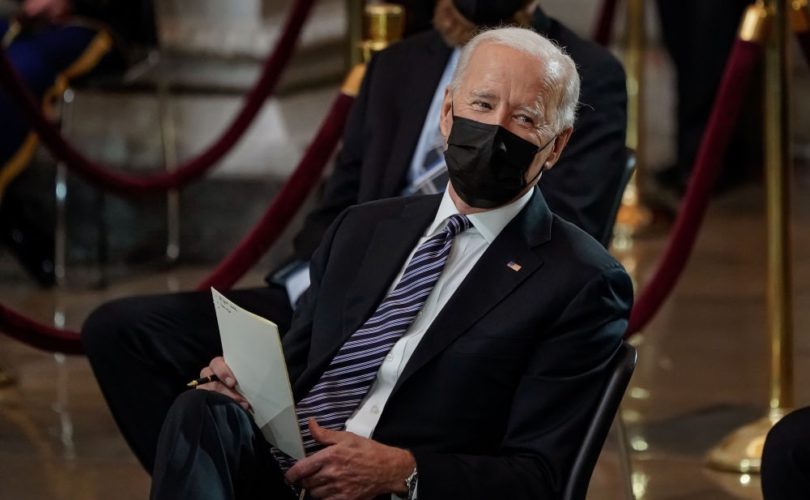 WASHINGTON, D.C. (LifeSiteNews) – President Joe Biden had a stark message Tuesday for Americans concerned about how COVID-19 might impact them and their plans over the Christmas celebrations of the next two weeks: vaccinate or else.

Before the remarks, the White House released a list of new actions in response to the currently-spreading omicron variant of COVID, including the deployment of military medical personnel and Federal Emergency Management Agency (FEMA) teams around the country to support hospitals, preparing medical supplies and ventilators for distribution, expanding testing sites and rapid-test distribution, and ramping up vaccinations, including new “pop-up” vaccine sites and relaxed rules allowing “pharmacists and pharmacy interns to administer a wider set of vaccinations across state lines.”

“I know some Americans are wondering if you can safely celebrate the holidays with family and friends. The answer is yes you can if you and those who celebrate with you are vaccinated,” Biden said Tuesday in a White House address. But “if you’re not fully vaccinated, you have good reason to be concerned” about omicron.

“You’re at a high risk of getting sick,” he continued. “And if you get sick you’re likely to spread it to others, including friends and family. The unvaccinated have a significantly higher risk of ending up in a hospital, or even dying.”

In fact, most Americans below age 65 face less than a 1% risk of dying from COVID in the absence of other negative health factors, such as obesity or vitamin deficiency. Further, the majority of American omicron cases so far have been among the vaccinated, and only one American has died from it as of December 21 (Texas health officials say the unidentified victim was between ages 50-60, unvaccinated, and previously had COVID an unknown length of time before reinfection, but also had other unspecified medical issues).

PRES. BIDEN: "If you're not fully vaccinated, you have good reason to be concerned." pic.twitter.com/cqTgGGzLoN

“You have an obligation to yourselves, to your family, and I know I’m going to get criticized for this, but to your country” to get vaccinated, the president declared, going on to blame COVID vaccine hesitancy on “dangerous misinformation on cable TV and social media,” and blame the vaccinated for allegedly crowding hospitals near or beyond capacity.

Critics say talk of “overrun” hospitals ignores several ways capacity data has been inflated since the start of the pandemic, including COVID hospitalization numbers that fail to differentiate among genuine emergency situations,  mild cases, and patients who tested positive while being hospitalized for a different issue. Critics further note that Biden’s own vaccine mandate for health workers threatens to exacerbate hospitals’ staffing problems even more.

"The unvaccinated are causing hospitals to become overrun again." pic.twitter.com/PuZlQycFVT

As part of his appeal, Biden invoked former President Donald Trump, who recently revealed he took a COVID booster shot and urged his fans to do the same. Biden also went out of his way to credit the Trump administration for the initiative that developed the COVID shots faster than any other vaccine in history.

"Just the other day, former President Trump announced he had gotten his booster shot. It may be one of the few things he and I agree on." — President @JoeBiden pic.twitter.com/gOWdpP3Dyh

Biden credits the Trump administration for the development of the vaccine: "Thanks to the prior administration, and our scientific community, America is one of the first countries to get the vaccine." pic.twitter.com/FDdmtJ9ykg

Despite offering grim warnings of death and misery, the president simultaneously claimed Americans should be “concerned about omicron but not panicked,” insisting that the current situation is “absolutely” not a repeat of the pandemic’s early days, because “we have more tools than we’ve ever had before,” including tests, vaccines, and masking, which he said Americans should continue regardless of vaccination status (despite masks being largely ineffective at containing COVID).

Pres. Biden: "Another question that folks are asking is 'Are we going back to March 2020?'…The answer is absolutely no. No." https://t.co/5t98JBtY8d pic.twitter.com/dd4G1Tdheb

BIDEN: "According to our doctors, even if you're fully vaccinated you should still wear a mask when indoors or in public settings." pic.twitter.com/WCfkwktuzq

Notably, Biden made no mention of early COVID treatment options such as ivermectin-based protocols, which can prevent severe illness, hospitalization (and hospital crowding), and death.

Biden also gave another defense of his worker jab mandate, which he admitted was unpopular but meant “to save your life,” even claiming that forcing businesses to force vaccinations on their workers would make people more likely to shop at “safer” establishments. In reality, many employers are concerned that vaccine mandates will exacerbate the staffing shortages many businesses have endured under Biden.

.@JoeBiden: "I know vaccination requirements are unpopular———for many. They're not even popular for those who—are anxious to get them. My administration has put them in place not to control your life, but to save your life——and the lives of others." pic.twitter.com/qtIgXg1B6z

Notably, Biden made a point of referring to the mandate as a “vaccine-or-test” rule, with an emphasis on the weekly testing option, perhaps to soften the policy’s public image.

In a lengthy Twitter review of Biden’s remarks, Stanford epidemiologist and Great Barrington Declaration co-author Dr. Jay Bhattacharya credited the president for some points, including “finally” acknowledging that the current vaccine “does not stop infection or disease transmission,” insisting schools stay open, and not suggesting a return to lockdowns.

But Bhattacharya also faulted Biden for his “tone of demonization, blaming, and ‘othering’ of the unvaccinated,” for ignoring natural immunity and early treatments, for not acknowledging “that the government & some media have caused great harm to trust in science & the vaccines by their propaganda and silencing of scientific dissidents,” for his continued support of vaccine coercion, and for not recognizing “the catastrophic harms caused by the lockdown-focused policies of the last two years,” an apology for which “would begin to restore trust in public health.”

Data indicates that widespread dissemination of the COVID-19 vaccines, which has been the centerpiece of the Biden administration’s COVID response, has failed to end the pandemic. The federal government considers more than 204 million Americans (almost 62% of the eligible) to be “fully vaccinated” (a moving target given the vaccines’ temporary nature), yet data from Johns Hopkins University reported in October shows that more Americans died of COVID-19 by that point in 2021 (353,000) than in all of 2020 (352,000). The Moderna shot has been available throughout all of 2021; the Pfizer and Johnson & Johnson shots were made available in late February.