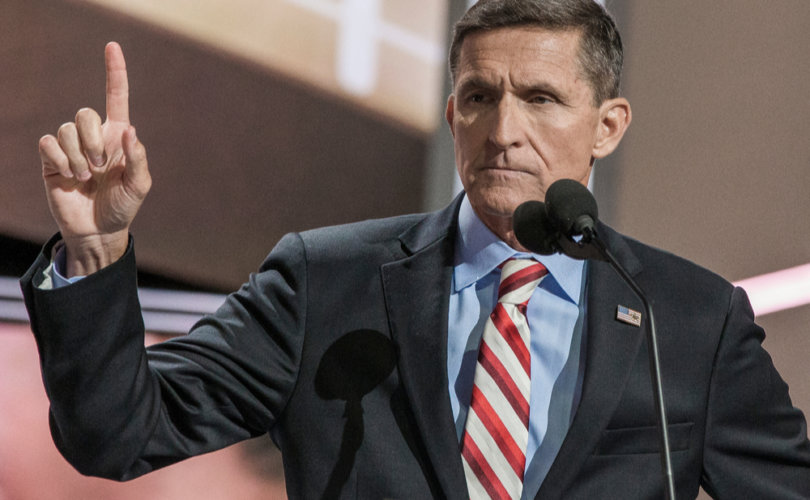 “President Biden and his failed foreign policy team set the table and sent the invitation and President Putin came and spoiled the dinner party,” Flynn said in a statement.

Flynn doubted the Biden administration will pivot after its failures and instead will make “weak attempts to triple down on leveraging this extremely serious situation in Europe to continue to distract from problems here at home.”

At the White House on Thursday afternoon, Biden told reporters he had not expected in the previous weeks leading up to the invasion that the threat of sanctions would deter Putin.

“He’s not going to say, ‘Oh my god, sanctions are coming, I’m going to stand down,'” Biden said of the Russian leader.

However, Vice President Kamala Harris told reporters on Sunday that “the purpose of the sanctions has always been and continues to be deterrence.”

Biden said Thursday that now that sanctions are being implemented, “it will take time” to see any results.

In Flynn’s statement, he wondered how Biden came to the conclusion that he should shut down the Keystone XL pipeline, undermining America’s energy independence, while enabling Russia and Germany to continue building the Nord Stream 2 pipeline.

Flynn’s deputy national security adviser during his 22 days in the White House, KT McFarland, said Thursday that the “single most important thing” Biden could do to counter Putin is to take away Russia’s leverage by reopening “American energy industry.”

Flynn listed the actions of the Democrat Party government: “Describing America as a systemically racist nation, the appointment of Marxists and other radical ideologues to positions of power, allowing millions to surge across our southern border, attempts to federalize and take over our election systems and processes, implementing racist CRT in our schools, our military and across our government, all along, raising the national debt closing in on $30 Trillion dollars, spending us toward extinction, all for left-wing causes.”

He also recalled “the Afghanistan disaster, the myriad lies about COVID, a certain Biden-owned laptop, and a fraudulent presidential election that has massive amounts of evidence coming out daily … all while China gets a pass.”

“It is extremely difficult to trust this administration as they lie with a straight face to the American people daily,” Flynn said.

Flynn resigned his national security adviser post amid a Russia-related probe against him launched by the Obama Justice Department. The DOJ later dropped charges after Flynn and his lawyer, Sidney Powell, presented evidence he was “ambushed” by FBI agents after the bureau concluded it didn’t have a case.

McFarland served another three months after Flynn’s resignation and was asked to step down by successor H.R. McMaster.