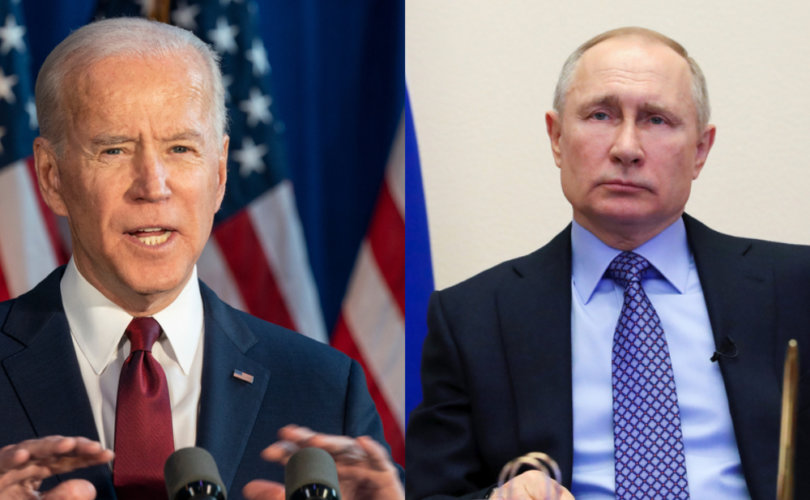 (WND) – The “single most important thing” President Biden could do to counter Russia’s invasion of Ukraine is to take away Vladimir Putin’s leverage by reopening “American energy industry,” according to former deputy national security adviser KT McFarland.

President Biden announced new sanctions February 24, but McFarland said in an interview this morning with “Fox & Friends” that the penalties won’t deter Putin.

That’s because the Russian leader’s “coffers” are full and he has “political leverage over Europe.”

Noting “providence has given us the greatest stockpiles and supplies oil and natural gas of any other region of the world,” Biden could go to the Germans and other European nations and promise “energy security,” said McFarland, who served under President Trump.

“He could go to the Asians and say, I’m going to supply you with energy as well,” added McFarland.

“Not only would that take away the leverage of Russia and China, it would also drive the prices of energy down and bankrupt Russia. They need high revenues from oil or they can’t pay for anything else.”

On his first day in office, Biden shut down the Keystone XL pipeline and subsequently reversed many Trump administration policies that had made the U.S. energy independent. And he allowed the continued construction of the Nord Stream 2 pipeline connecting Europe to Russian oil.

At the White House on Thursday afternoon, Biden told reporters he had not expected in the previous weeks leading up to the invasion that the threat of sanctions would deter Putin.

“He’s not going to say, ‘Oh my god, sanctions are coming, I’m going to stand down,’” Biden said.

However, Vice President Kamala Harris told reporters last Sunday that “the purpose of the sanctions has always been and continues to be deterrence.”

Biden said Thursday that now that sanctions are being implemented, “it will take time” to see any results.

Putin, he said, is “going to test the resolve of the West to stay together.”

“And we will,” Biden said. “We will and it will impose significant costs on him.”

Biden: “No one expected the sanctions to prevent anything from happening…Putin’s not going to say ‘oh, my god, the sanctions are coming.'”

Right after a speech announcing a new round of sanctions. #Ukraine pic.twitter.com/0GctfBmTba

After the press conference, Sen. Josh Hawley, R-Mo., said he would “introduce legislation on Monday when the Senate returns to session to lift Joe Biden’s shut down of the American energy sector and return American energy to full production.”

I will introduce legislation on Monday when the Senate returns to session to lift Joe Biden’s shut down of the American energy sector and return American energy to full production. No more weakness