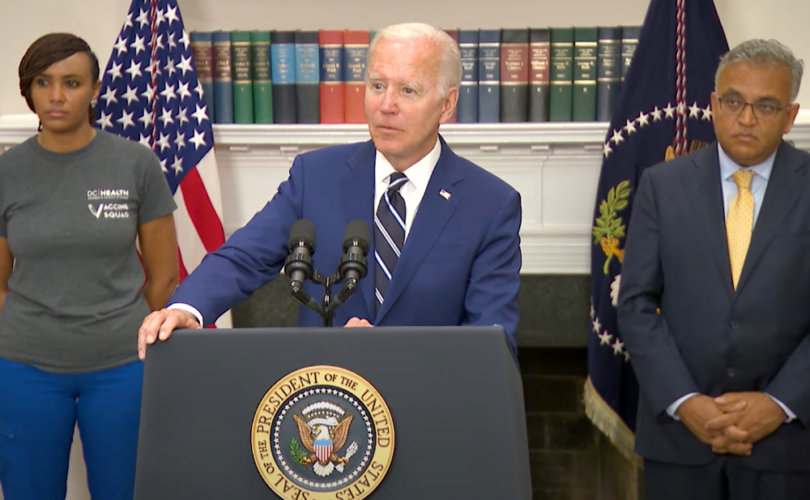 Joe Biden speaks at a press conference from the White House.White House YouTube

(LifeSiteNews) – President Joe Biden repeated the unconfirmed claim that a 10-year-old traveled from Ohio to Indiana for an abortion after the undoing of Roe v. Wade, bungling his remarks while doing so.

Joe Biden: “…she was forced…to terminate the Presidency and maybe save her life”

Referring to an oft-repeated narrative first reported by the Indy Star, Biden said during Friday remarks at the White House, “Just last week, it was reported that a 10-year-old girl was a rape victim in Ohio. 10 years old. And she was forced to have to travel out of the state to Indiana. To seek to terminate the presidency and maybe save her life.”

His remarks came as he signed an executive order with the goal of protecting abortion access in the wake of Roe v. Wade’s reversal.

The source of the story is Dr. Caitlin Bernard, an Indianapolis obstetrician-gynecologist who reportedly received the referral from a colleague, a doctor in Ohio with a 10-year-old patient who was six weeks and three days pregnant, only three days after Roe was overturned.

Bernard, the paper reported, helped the girl abort her baby in Indiana. The story is sparse on details — both the original and a second copy posted the following day.

Bernard declined to comment to LifeSiteNews about the report, stating in an email, “Thank you for reaching out. I’m sorry, but I don’t have any information to share.”

Her statement was echoed by Lisa Tellus, public relations manager at Indiana University Health, in another email to LifeSiteNews after a request for information. “I’m sorry, but we don’t have any information to share,” Tellus wrote.

— Article continues below Petition —
DEFEND Mothers and Babies Against Powerful CEOs Paying Female Employees to Abort!
Show Petition Text
5491 have signed the petition.
Let's get to 6000!
Thank you for signing this petition!
Add your signature:
Show Petition Text

While it is mostly conservative news outlets expressing skepticism about the report, even the far-left Washington Post has observed that the story of the abortion-seeking 10-year-old is largely unsupported. The newspaper has pointed out, for example, that in Ohio a physician must report “any case of known or suspected” sexual abuse “to their local child welfare or law enforcement agency.”

“As a spot check, we contacted child services agencies in some of Ohio’s most populous cities, including Cleveland, Columbus, Cincinnati, Dayton and Toledo. None of the officials we reached were aware of such a case in their areas,” The Washington Post shared.

In addition, no arrests in such a case have been reported, noted the New York Post.

Journalist and author Megan Fox took to Twitter to highlight the conspicuous absence of any related Ohio criminal investigations and other “red flags” regarding the story. She has pointed out, for example, that Dr. Bernard, the only source for the story, “is an abortionist and has been in the NYT participating in an anti-Trump hit piece and is clearly an activist. She has a stake in preserving abortion. It literally pays her bills.”

In addition, she pointed out that “there’s no way to verify Bernard’s claim. She has doctor patient confidentiality. No one can FOIA her. The media won’t ask any questions and even if they did she wouldn’t answer. There is no proof that this 10-year-old even exists and yet the media ran with it full tilt.”

Further calling into question the credibility of Biden’s claim regarding the 10-year old is his rapidly deteriorating cognition, which during these very remarks were highlighted by his substitution of the word “presidency” for “pregnancy.”

This blunder comes amid two other major gaffes — among countless others by Biden — during the same Friday remarks.

While defending his pro-abortion executive order, Biden falsely claimed that a doctor would delay treatment of a woman “experiencing a life-threatening misscariage” for fear of being penalized under US abortion law.

Biden claims that Roe v Wade being overturned means that hospitals and doctors would hesitate to treat women who’ve had a miscarriage. pic.twitter.com/8S5zTr1gzA

Biden also read the teleprompter instructions “end of quote” and “repeat the line” during Friday’s remarks, prompting a stream of ridicule from Twitter commentators.

Elon Musk highlighted Biden’s clear resemblance to the fictional character Ron Burgundy, who in the movie “Anchorman” comically reads everything — including inappropriate comments and inflections — written on his teleprompter.

“Whoever controls the teleprompter is the real president!” Musk declared on Twitter.