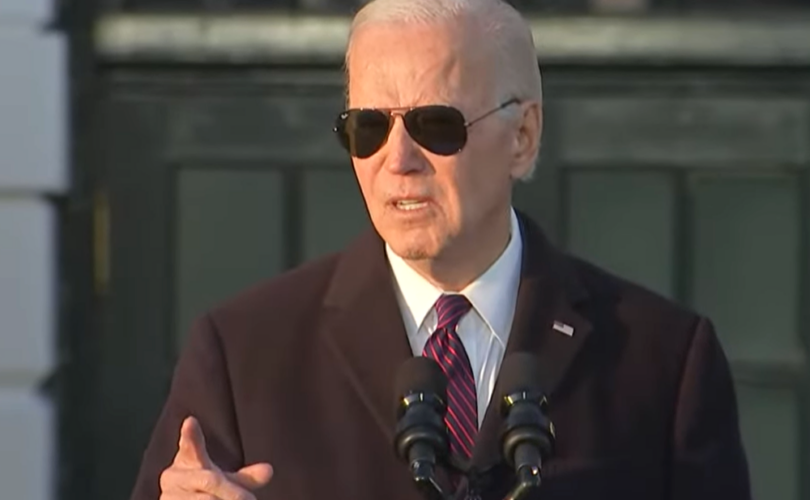 The RMA repeals the longstanding (but unenforced) Defense of Marriage Act (which recognized marriage as a man-woman union in federal law and protected states’ rights to do the same), federally recognizes any “marriage” lawfully performed by any state and forces every state to recognize any “marriage” of any other state “between two individuals,” without regard for “the sex, race, ethnicity, or national origin of those individuals.”

“This law, and the love it defends, strike a blow against hate in all its forms,” Biden said Tuesday during the bill’s signing ceremony. “Thank you to everyone for a long-fought victory many years in the making.”

The Daily Wire reported that “non-binary” drag queen, television personality, and failed New York City Council candidate Marti G. Cummings announced he would also be in attendance, sharing an image of his invitation via social media.

“To be a non-binary drag artist invited to the White House is something I never imagined would happen,” he said. “Grateful doesn’t begin to express the emotions I feel.”

“Marti is proud to serve on the Board of Directors for The Ali Forney Center for Homeless LGBTQ Youth, the Advisory Board of Equality NY, is a National Co Chair of Drag Out the Vote and serves on the NYC Nightlife Advisory Council as well as Community Board 9,” according to his website.

“I’m a queer, feminist person who uses not just male pronouns but female and non-gendered pronouns. I feel like gender is a social construct and there’s more than one gender, and I don’t really know where I fall in that,” Cummings told Out magazine in 2019. “For a young person who may feel that way, seeing somebody like me running is an opportunity to see themselves, somebody who’s not just cookie cutter but somebody who is different.”

Cummings went on to claim it was important for children as young as 12 to have a “queer role model.”

“I’m 32. So if I’d have been 12 years old and I saw somebody like me in office, it would’ve completely probably changed the trajectory of who I am today,” he said. “That’s what’s so cool about having Danica Roem in Virginia and Andrea Jenkins in Minneapolis because some young 12-year-old is going to go, ‘Oh, I can do that.’ When I was 12 years old, it was not even a vision in my mind that running for office is something that I could do. But it’s people like Danica and Andrea that help people say, ‘Oh, I can do this, I can do this,’ I hope that some 12-year-old kid feels inspired.”

Biden has made indulging the full range of LGBT activists’ current demands a priority of his administration, up to and including the promotion of mental, surgical, and chemical “transitioning” of children suffering from gender dysphoria.

As for the RMA, with the re-elections of Mitch McConnell to lead Republicans in the Senate and Kevin McCarthy in the House, plus RMA supporters recently elected to other party leadership roles, the GOP appears poised to continue its current trajectory on marriage for the foreseeable future unless new leaders are able to marshal enough political capital to force a different direction in future elections.