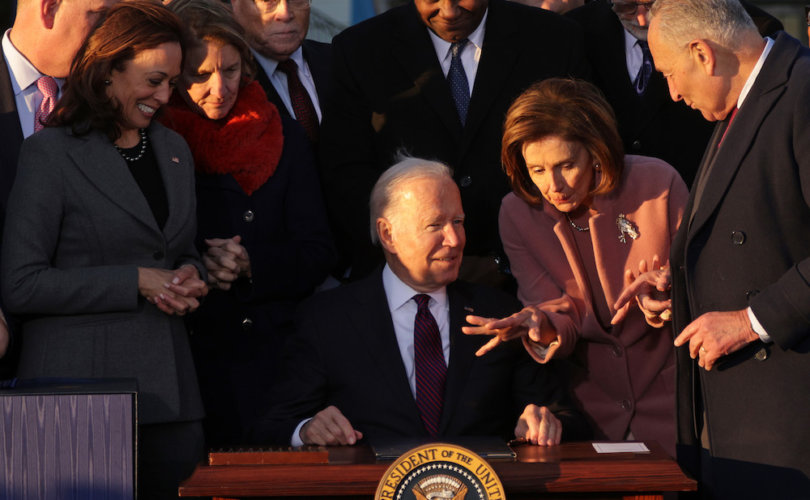 WASHINGTON, DC - NOVEMBER 15: U.S. President Joe Biden (3rd-R) talks to Speaker of the House Rep. Nancy Pelosi (D-CA) (2nd-R) as Senate Majority Leader Sen. Chuck Schumer (D-NY) (R) and Vice President Kamala Harris (L) look on after signing the Infrastructure Investment and Jobs Act as he is surrounded by lawmakers and members of his Cabinet during a ceremony on the South Lawn at the White House on November 15, 2021 in Washington, DC. The $1.2 trillion package will provide funds for public infrastructure projects including improvements to the country’s transportation networks, increasing rural broadband access, and projects to modernize water and energy systems. (Photo by Alex Wong/Getty Images)Getty Images

The Infrastructure Investment and Jobs Act (IIJA), which is estimated to expand the federal deficit without leading to significant wage or GDP growth, notably includes far-left, “woke” provisions, like a section that would make “gender identity” and “sexual orientation” federally-protected classes.

No individual in the United States may, on the basis of actual or perceived race, color, religion, national origin, sex, gender identity, sexual orientation, age, or disability, be excluded from participation in, be denied the benefits of, or be subjected to  discrimination under any program or activity that is funded in whole or in part with funds made available to carry out this title.

That section “would severely undermine religious freedom in America, and tacitly affirm the pernicious, false message that the sexual morality historically taught by Judaism, Christianity, and Islam is bigoted and akin to racism,” the Religious Freedom Institute has said, noting that it would force faith-based businesses and other institutions “to violate their religious conscience or be denied participation in the program.”

Family Police Alliance also pointed out that the bill “defines the terms ‘gender identity’ as being ‘actual or perceived.’ This means any man can claim an identity as a woman at any time, for any length of time.” The pro-family group likened Section 60307 to language used in the pro-LGBT, pro-abortion Equality Act.

Section 60307 is part of the Digital Equity Act (DEA), which was sponsored by outgoing Republican Sen. Rob Portman of Ohio and adopted into the IIJA. The DEA additionally creates a grant program to fund broadband internet expansion in states based in part on the size of their racial minority and immigrant populations.

Portman, one of the 19 Republican senators who voted in favor of the infrastructure bill, joined Biden at a signing ceremony at the White House on Monday, as did GOP Sens. Bill Cassidy of Louisiana, Susan Collins of Maine, and Lisa Murkowski of Alaska. Republican Reps. Don Young of Alaska and Tom Reed of New York were in attendance as well, the New York Post reported.

Senate Minority Leader Mitch McConnell, another prominent Republican backer of the IIJA, did not attend the event, though Biden thanked him “for voting for this bill and talking about how useful and important it is.”

The IIJA is unlikely to boost the economic growth at all. Analysis by the University of Pennsylvania Penn-Wharton Budget Model found that it would “have no significant effect on GDP or productivity,” while the Committee for Responsible Federal Budget has warned that it could add more than $340 billion to the federal deficit amid record-level inflation.

The Republican Study Committee (RSC) noted in a memo in August that only $110 billion of the trillion-dollar bill funds “roads, bridges and other major projects that the American people generally consider ‘infrastructure.’”

At the same time, the IIJA sets aside hundreds of billions of dollars for climate initiatives, doling out $50 billion “to stop the rise of the oceans” and $7.5 billion for electric vehicles, according to the Club for Growth. An additional $66 billion would expand Amtrak and other rail services to “replace air travel with trains,” while “eliminating tax-payer accountability from Amtrak’s mission,” the RSC’s memo stated.

Other projects include a program “to encourage women to enter the field of trucking,” a pilot program to test a national mileage tax, and grants to induce children “including those with disabilities, to walk and bicycle to school,” to reduce “fuel consumption.” As Breitbart reported, the bill also provides $2.5 billion for border processing stations, including $330,000,000 for migrant welcome centers, with no money for the border wall.

Enactment of the IIJA comes after months of Democratic infighting, as House progressives blocked the bill in an attempt to secure passage of a $1.75 trillion, pro-abortion “human infrastructure” package titled the Build Back Better Act (BBB). The BBB has still not passed either chamber, however, and remains in jeopardy due to opposition from “moderate” Democratic Sens. Joe Manchin of West Virginia and Kyrsten Sinema of Arizona.

Democrats moved quickly to pass the smaller infrastructure after their devastating election losses in Virginia and amid an unabated collapse in Biden’s approval ratings. The latest ABC-Washington Post poll shows Biden’s poll numbers down to 41 percent, with a 10-point advantage for Republicans going into the 2022 midterms.

The House of Representatives finally approved the IIJA two weeks ago in a narrow 228-206 vote with crucial support from Republicans. Thirteen GOP congressmen voted for the bill, getting it over the line despite defections from six far-left Democrats of “the Squad,” including Reps. Alexandria Ocasio-Cortez and Ilhan Omar.