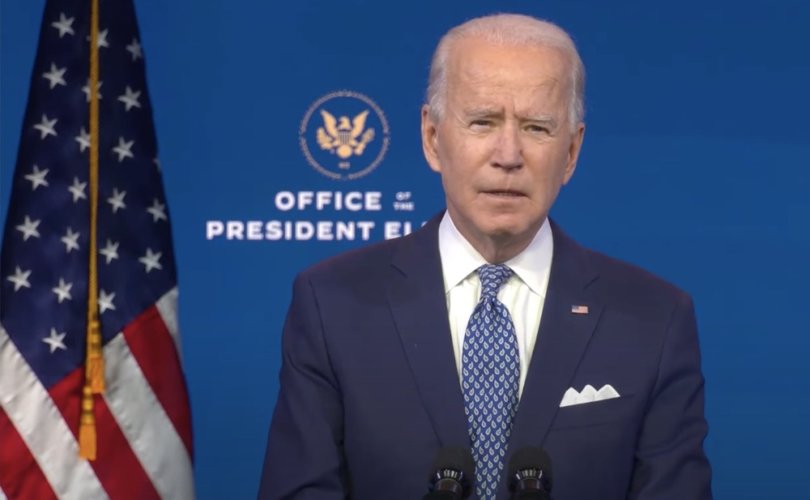 The president tweeted Friday, “So far this year, hundreds of anti-LGBTQ bills have been introduced in state legislatures – many of them target transgender children. Let's be clear: This is bullying against kids disguised as legislation – and it must stop. Enough is enough.”

So far this year, hundreds of anti-LGBTQ bills have been introduced in state legislatures – many of them target transgender children.

Let’s be clear: This is bullying against kids disguised as legislation – and it must stop. Enough is enough.

Biden could possibly be referring to “hundreds” of bills introduced in over 30 states protecting girls' sports from male intrusion. Many state legislators took swift action after Biden’s first action as president was to sign an executive order targeting Title IX, asserting that “[a]ll persons should receive equal treatment under the law without regard to their gender identity or sexual orientation.” It also stated that, “[c]hildren should be able to learn without worrying about whether they will be denied access to the restroom, locker room, or school sports.”

State legislators drafting and passing bills are responding to widespread concern that allowing transgender athletes to compete against girls would increase risk of injury to girls and strip deserving females of opportunities for accolades and scholarships. In fact, the Mississippi bill, which was one of many bills passed across the nation, argued that, “The evidence is unequivocal that starting in puberty, in every sport except sailing, shooting, and riding, there will always be significant numbers of boys and men who would beat the best girls and women in head-to-head competition. Claims to the contrary are simply a denial of science.”

In March, Mississippi Governor Tate Reeves took a pro-active step to combat Biden’s executive order. He tweeted, “I never imagined dealing with this, but POTUS left us no choice. One of his first acts was to sign an EO encouraging transgenderism in children. So today, I proudly signed the Mississippi Fairness Act to ensure young girls are not forced to compete against biological males.”

I never imagined dealing with this, but POTUS left us no choice. One of his first acts was to sign an EO encouraging transgenderism in children. So today, I proudly signed the Mississippi Fairness Act to ensure young girls are not forced to compete against biological males. pic.twitter.com/INZgKQRMJr

“How is allowing men to compete against women not bullying women?” asked Father Stepehen Imbarrato, founder and director of LifeMinistriesUS.

He told LifeSiteNews, “As an apostate Catholic, Joe Biden has made a career of this kind of political hypocrisy. You can’t in one breath say you care about children being bullied and in the next breath say it’s okay to murder the weakest of children through abortion.”

However, it is not only girls in sports who are adversely affected by Biden’s transgender ideology.

When asked by a mother of an eight-year-old at a Philadelphia Town Hall last October in regards to Trump-era policies how he “as president” would “reverse…discriminatory agenda” to ensure the “rights of LGBTQ people are protected under U.S. law,” Biden answered he would “eliminate those executive orders.”

He went on to say, “The idea that an eight-year-old child or a 10-year-old child decides, ‘You know, I decided I want to be transgender. That's what I think I'd like to be. It would make my life a lot easier.’ There should be zero discrimination.”

Pro-life movie producer Jason Jones and host of The Jason Jones Show told LifeSiteNews, “Biden doesn’t care about children being brutalized by dangerous hormone blockers. He could not care less about young girls' dreams being dashed, or their scholarships robbed after years of discipline. He would trample our children all for the sake of political ambition.”

Many states responded by banning the gender “transitioning” of minors due to dangerous and harmful effects on children. In Georgia, for example, State Rep. Ginny Ehrhart (R-36) is drafting a bill that would make it a felony for medical providers to interfere in the development of a child by prescribing cross-sex hormones or puberty blockers, for example.

According to GenderHQ.org, “10-year-old children are now making decisions about procedures that can negatively impact sexual function, cause life-long dependence on hormone prescriptions and monitoring, irrevocably alter their bodies, and sterilize them. Surgeries are performed on minors now in Western countries…such as the United States, with the goal being to make this the norm in all countries.”

Dr Michelle Cretella, Executive Director of American College of Pediatricians, believes that the best thing one can do for gender confused children is to give them time. In a commentary for the Daily Signal in 2017, Cretella wrote, “Even the American Psychological Association’s Handbook of Sexuality and Psychology admits that prior to the widespread promotion of transition affirmation, 75 to 95 percent of pre-pubertal children who were distressed by their biological sex eventually outgrew that distress.”

“The vast majority came to accept their biological sex by late adolescence after passing naturally through puberty,” she continued.

Cretella listed some of the risks associated with gender affirmation in children who are treated with cross sex hormones. These include “cardiac disease, high blood pressure, blood clots, strokes, diabetes, and cancers.”

“These harms constitute nothing less than institutionalized child abuse.”