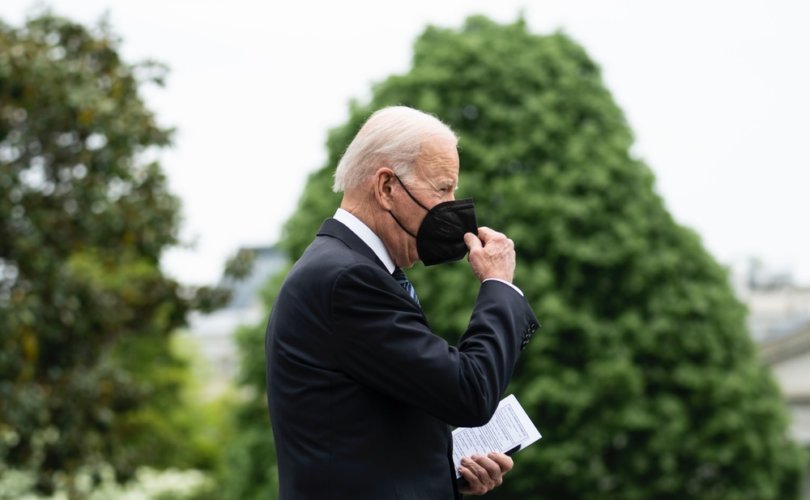 (LifeSiteNews) — Diverging from the Democrat talking point that “fetuses” do not qualify for personhood, U.S. President Joe Biden slipped up on Tuesday by using the word “child” when talking about abortion.

“So, the idea that we’re going to make a judgment that is going to say that no one can make the judgment to choose to abort a child based on a decision by the Supreme Court … goes way overboard,” Biden stated during a Tuesday press conference about the potential reversal of Roe v. Wade.

How tragic to see a man, who for decades in the Senate stood against tax funding for abortion, so completely sell out to Big Abortion pic.twitter.com/1baGbniuRu

“How tragic to see a man, who for decades in the Senate stood against tax funding for abortion, so completely sell out to Big Abortion,” the advocacy organization lamented.

“Why hasn’t the Catholic Church excommunicated [Joe Biden] yet?” asked one Twitter user, referencing Biden’s self-identification as a Catholic, a religion that requires adherents to oppose abortion.

Why hasn’t the Catholic Church excommunicated @JoeBiden yet? https://t.co/8qW97L3341

“Abort a child. He accidentally told the truth,” wrote another.

He accidentally told the truth. https://t.co/NoS9JhDa9r

Biden’s slip-up came at a press conference he held to comment on the leaked Supreme Court draft opinion that would overturn the landmark 1973 Roe v. Wade decision if sustained.

Despite Biden’s admittance that unborn babies are indeed children, the president still came out in opposition of the potential court decision, calling the opinion “radical” and saying it could threaten a “whole range of rights.”

“If [the draft opinion] becomes the law and if what is written remains, it goes far beyond the concern of whether or not there is the right to choose,” Biden told reporters, suggesting it a reversal of Roe would put “other basic rights” at stake, including “the right to marry,” “whether you decide to conceive a child or not,” “how you raise your child,” and “basically … all of the decisions of your private life.”