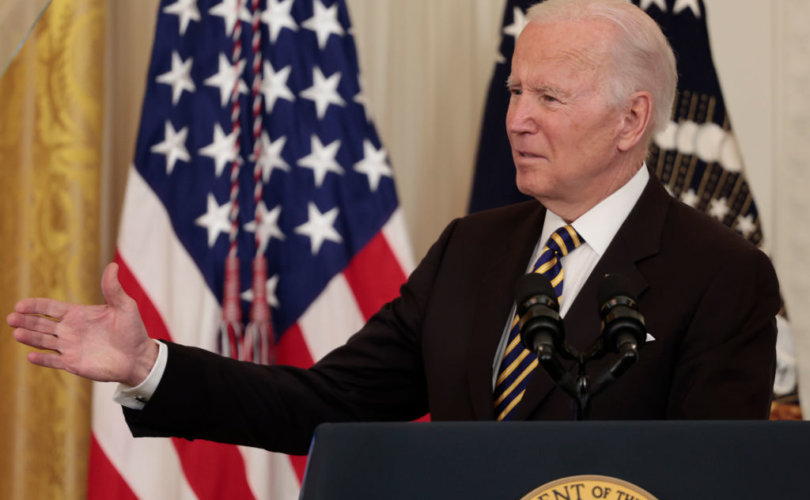 WASHINGTON, DC - APRIL 27: U.S. President Joe Biden delivers remarks during an event for the 2022 National and State Teachers of the Year in the East Room of the White House on April 27, 2022 in Washington, DC. The event honored teachers from across the United States including the 2022 National Teacher of the Year Kurt Russell who is a veteran history teacher from Oberlin High School in Oberlin, Ohio. (Photo by Anna Moneymaker/Getty Images)Anna Moneymaker/Getty Images

WASHINGTON, D.C. (LifeSiteNews) – During a Teachers of the Year event at the White House, U.S. President Joe Biden told teachers that their students effectively belong to them and not “somebody” else when they are in their classrooms.

“And you’ve heard me say it many times, about our children, but it’s true, they’re all our children,” Biden said in his address to the teachers on Wednesday.

Joe Biden says to teachers about their students “they are not somebody else’s children. They’re yours when you’re in the classroom.”

No, Joe, they are not “somebody else’s children.”

They are OUR children. pic.twitter.com/A5wW3ytRQk

“And the reason you’re the teachers of the year is because you recognize that, they’re not somebody else’s children, they’re like yours when you’re in the classroom,” added the president.

“No, Joe, they are not ‘somebody else’s children.’ They are OUR children,” stated pro-family organization American Principles Project.

The topic of parental involvement in education has been one of the primary issues in the country in recent months, gaining particular traction after Florida’s Republican Gov. Ron DeSantis signed into law a bill that prohibits children in the third grade or younger from being taught sexual or gender ideology.

Since then, other states have advanced similar legislation with the hopes of expanding the rights of parents and ensuring teachers are not able to push their own political or philosophical beliefs onto other people’s children.