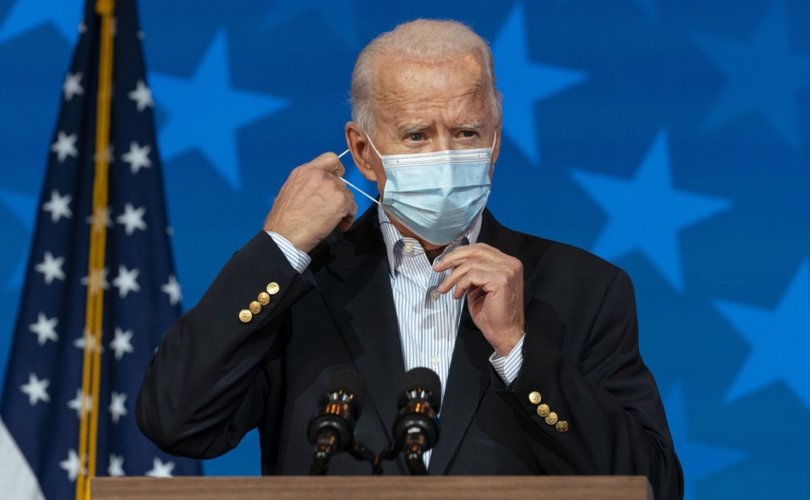 (LifeSiteNews) — The Biden administration plans to require non-American “essential travelers” crossing into the United States to be fully vaccinated for COVID-19 starting January 22 of next year, while continuing to allow illegal immigrants to enter the country regardless of their COVID status.

The Associated Press reports that the requirement will apply to non-citizen truckers, government vehicles, and emergency response officials entering the country by road or ferry. It will not yet apply to American citizens or permanent residents, who will instead be subject to more stringent testing rules.

“These requirements are another example of how impractical regulations will send safe drivers off the road” and of “how unnecessary government mandates can force experienced owner-operators and independent truckers out of business,” responded Norita Taylor, spokesperson for trucking group Owner-Operator Independent Drivers Association.

The decision comes as President Joe Biden presides over a surge of illegals entering the United States and being released inside the country, following the reversal of Trump-era border policies, such as the previous administration’s third-country agreements with the governments of El Salvador, Guatemala, and Honduras to host refugees while their applications for political asylum in America were reviewed.

Estimates of illegals who have tested positive for COVID-19 after crossing the border this year range from 20 percent to more than half. Yet conservatives allege that the double-standard originates from Democrats’ view of migration from Mexico as a reliable source of new Democrat voters.

Migrants who illegally cross the U.S. southern border “will not be subject to any vaccination requirements even when released directly into the United States (where most will remain), while roughly a hundred million U.S. citizens will be subject to unprecedented vaccination requirements,” reads a lawsuit brought in September against the Biden administration by Arizona Attorney General Mark Brnovich. “This reflects an unmistakable — and unconstitutional — brand of favoritism in favor of illegal migrants.”

Meanwhile, a body of data suggests that the mass vaccination strategy for defeating COVID-19 has failed, undermining the case for the Biden vaccine mandate that is currently held up in litigation. The federal government considers more than 196 million Americans (59% of the eligible) to be “fully vaccinated” (a moving target given the vaccines’ temporary nature), yet ABC News reported in October that more Americans died of COVID-19 this year (353,000) than in all of 2020 (352,000), according to data from Johns Hopkins University.

1
WATCH LIVE: LifeSite’s 25th Anniversary Gala – streaming now
2
Dr. Robert Malone: Endless mRNA jabs are in the works as the CDC and FDA play ‘hide the data’
3
Open letter to Elizabeth Warren: Why do you campaign so strongly for the murder of the unborn?
4
Why is Pierre Poilievre silent on the family policies that matter to conservatives?
5
Trump-backed candidate wins easy victory over Liz Cheney in Wyoming Republican primary
Subscribe to Daily Headlines »