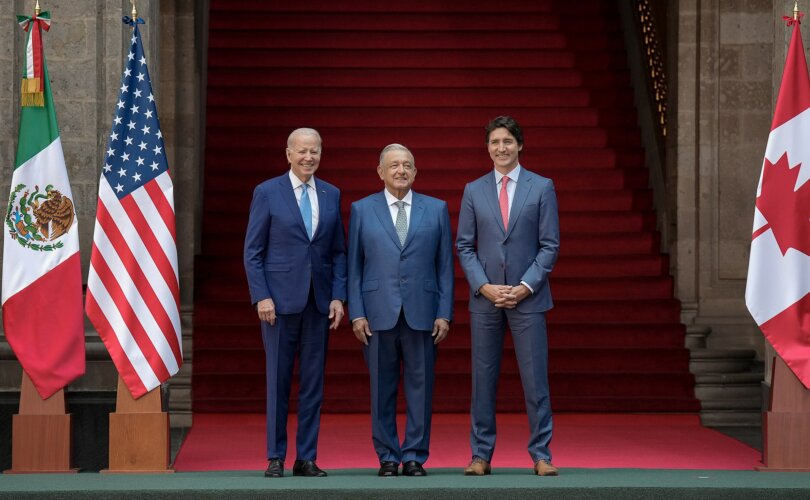 While envisioned as a momentous event, the gathering garnered little attention from the media, with Politico Playbook dismissing it as “THE SIDESHOW SUMMIT.”

Reports that Biden had classified documents at his Washington think tank office “dwarfed any news from the president’s first visit to Mexico,” wrote Politico’s Myah Ward and Jonathan Lemire.

The North American leaders, dubbed the “Three Amigos,” committed their countries to six “pillars,” a term borrowed from classical architecture intended to lend a sense of gravitas to their plans.

At the top of their list and scattered throughout are words normally associated with woke social justice agitators, not world leaders: 1) diversity, equity, and inclusion; 2) climate change and the environment; 3) competitiveness; 4) migration and development; 5) health; and 6) regional security.

“They outlined joint commitments for a WOKE new North America to be imposed on its citizens,” LifeSiteNews’ John-Henry Westen noted.

A White House statement issued after the meeting highlighted the following plans to direct the future course of the three nations.

Biden, Trudeau, and Obrador committed to “promote racial justice” and “expand protections for LGBTQI+ individuals” in order to deliver “more equitable outcomes to all.”

“That all of course excludes people of faith who object to the LGBTQI+ ideology,” observed Westen, who then called out the trio’s false claims about improving women’s and girls’ rights:

This is Orwellian doublespeak. They are totally against women. They are against women having safety and privacy in bathrooms and changing rooms from biological males masquerading as women. They are opposed to safeguarding women’s sports from men who couldn’t hack the male-vs.-male competition.

The three leaders recognized “the critical nature of taking rapid and coordinated measures to tackle the climate crisis and respond to its consequences,” including “achieving our respective 2030 nationally determined contributions under the Paris Agreement and working together and with other countries to keep a 1.5-degree C temperature limit within reach. To promote buy-in for ambitious cuts to emissions, we will come together to align approaches on estimating the social cost of greenhouse gas emissions.”

Westen translated their obfuscatory language: “Get ready for even more tax hikes, and the price of gas at the pump skyrocketing while these so-called leaders take their private jets all over the globe and demand income taxes two-, three-, and four-times what God Himself demanded at 10 percent.”

The three insisted that developing their nations’ workforces in a way that will meet “climate commitments” is an integral component of plans to increase North America’s global competitiveness.

“This has been the greatest migration in human history around the world as well as in this hemisphere,” declared President Biden in Mexico City. “We’re trying to make it easier for people to get here – opening up the capacity to get here.”

“Now more than ever, we need to identify and address the root causes of irregular migration and forced displacement,” read the official white House statement.

In a scathing commentary, Fox Business’ Larry Kudlow explained that Biden’s “irregular” immigration reference is a euphemism for “illegal” migration, and “the root cause of illegal migration is a failure to secure our American border.

“Trilateral health cooperation will focus on “prevention, preparedness, agility, and to provide rapid response to health emergencies in North America,” according to the White House.

Mexico, the United States, and Canada will focus on strategies to bolster our shared continental security against domestic, regional, and global threats, including cyber threats. Security cooperation will continue to abide by our common understanding that respect for human rights and the rule of law contribute to a more secure North America.

In other words, “Get ready for more crackdown on conservative websites that seek to guard sanity in the realm of traditional values. Christ-centered values are the new security threat for these globalists, and they have declared a war on the one True God,” Westen warned.

“We are five days away from fundamentally transforming the United States of America,” prophesied candidate Obama on Oct. 30, 2008, days before his historic presidential election.  “I want a fundamental change,” Obama declared in 2007.

“We’re at one of those inflection points where what we do in the next several years is going to determine what the world looks like in the next two, three, four decades,” Biden continued.  “And that’s what we have an opportunity to do.  And I think we’re in a good position to do it.”