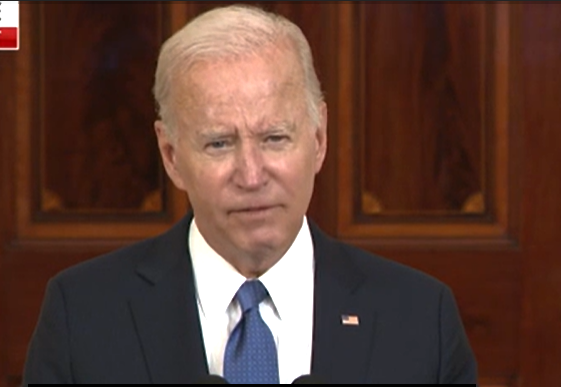 “Let me be very clear and unambiguous: The only way we can secure a woman’s right to choose — the balance that existed — is for Congress to restore the protections of Roe v. Wade as federal law,” Biden told the press from the White House on Friday.

“Elect more state leaders to protect this right at the local level,” the president added. “We need to restore the protections of Roe as law of the land. We need to elect officials who will do that.”

In his pro-abortion address, Biden decried the pro-life victory as stripping women of the “right to choose” to murder their unborn children, claiming abortion should be an “intensely personal decision with [a woman’s] doctor, free from interference of politics.”

According to the president, Roe v. Wade, which made it illegal for states to criminalize the ghastly practice of abortion, “reaffirmed basic principles of equality that women have the power to control their own destiny, and to reinforce the fundamental right of privacy.”

Biden assured his fellow abortion supporters that while the overturning of Roe v. Wade “casts a dark shadow over large swaths of the land,” there remain “many states in this country that still recognize a woman’s right to choose.”

The president also urged voters to elect pro-abortion politicians in the midterm elections this fall, saying that “Roe is on the ballot.”

In an attempt to reassure pro-abortion activists that “This is not over,” Biden reminded the public that “the Supreme Court’s decision does not prevent [a woman] from traveling from her home state to the state that allows it.”

Biden’s statements were met with immediate backlash, with many implying the president is a hypocrite for consistently calling himself Catholic while flagrantly denying the Church’s explicit condemnation of abortion.

“Joe Biden is NOT Catholic. Ban him from communion and kick him out of the church. Repent!” tweeted conservative journalist Jack Posobiec.

Joe Biden is NOT Catholic. Ban him from communion and kick him out of the church. Repent!

Due to the fact that the decision to overturn Roe v. Wade was leaked last month, pro-abortion groups have gone on the offensive, with one group in particular called “Jane’s Revenge” promising a “NIGHT OF RAGE” if the court overturns the decision.

In this week’s episode of Faith & Reason, produced by LifeSiteNews, editor-in-chief John-Henry Westen spoke with Fr. James Altman and other Catholic figures detailing how to protect one’s local parish from pro-abortion violence.