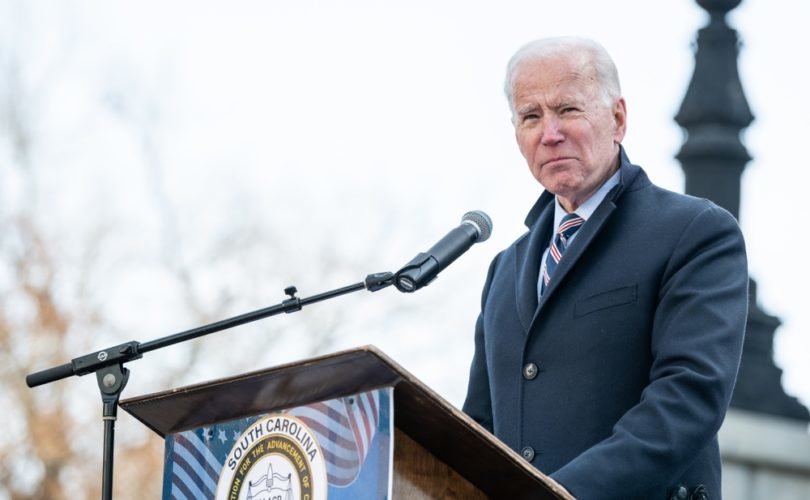 WASHINGTON, D.C. (LifeSiteNews) – President Joe Biden has weighed in on the leaked draft opinion that appears to show the U.S. Supreme Court has decided to overturn Roe v. Wade, calling on the elected branches of government to take over the preservation of abortion-on-demand.

On Monday evening, Politico published a leak of what appears to be a draft of a majority opinion written by conservative Justice Samuel Alito indicating that, if real and final, the justices have voted 5-4 to finally overturn the 1973 ruling that forced all fifty states to permit legal abortion, as well as 1992’s Planned Parenthood v. Casey, which reaffirmed Roe’s conclusion while modifying some of its details.

While the Court has not confirmed either the authenticity of the draft or whether it represents the justices’ final decision in Dobbs v. Jackson Women’s Health Organization, the leak has sent shockwaves across the political spectrum, with pro-lifers tentatively rejoicing, abortion supporters lashing out, and many speculating that the leak may have been intended to pressure judges to flip their votes, or to incite hatred and threats against them.

Published Wednesday morning, the White House statement attributed to Biden is prefaced with a caveat acknowledging that “whether this draft is genuine, or whether it reflects the final decision of the Court” is unknown, before reiterating Biden’s stance that “a woman’s right to choose is fundamental, Roe has been the law of the land for almost fifty years, and basic fairness and the stability of our law demand that it not be overturned.” Notably, the statement does not claim that Roe is legally sound.

Next, the statement notes that Biden “directed my Gender Policy Council and White House Counsel’s Office to prepare options for an Administration response to the continued attack on abortion and reproductive rights, under a variety of possible outcomes in the cases pending before the Supreme Court,” and “will be ready when any ruling is issued.” It does not elaborate on those options.

Finally, the statement declares that if Roe is ultimately overturned, “it will fall on our nation’s elected officials at all levels of government to protect a woman’s right to choose. And it will fall on voters to elect pro-choice officials this November. At the federal level, we will need more pro-choice Senators and a pro-choice majority in the House to adopt legislation that codifies Roe, which I will work to pass and sign into law.”

That final point reiterates Biden’s support for Democrat legislation to not only codify a “right” to abortion in federal law but expand it to forbid states from subjecting abortion to ultrasound requirements, mandatory waiting periods, informed-consent requirements, and other health and safety regulations, such as admitting privileges; as well as protect so-called “webcam” abortions (i.e., dispensing abortion pills without an in-person doctor’s visit), forbid banning abortions on the basis of a baby’s race, sex, or disability, and forbid banning particular techniques such as dilation and evacuation (D&E) procedures, better known as “dismemberment” abortions because they entail literally ripping unborn babies apart in the womb, then removing them from the uterus limb by limb.

Notably, Biden’s present-day position is a far cry from the one he took as a U.S. senator in the early 1980s, when he supported a constitutional amendment to allow states to overturn Roe.

The presidential statement omits any reference to or condemnation of the leak itself, which many commentators have called an improper attempt to influence the decision and an attack on the trust and integrity of the Supreme Court, which should be condemned regardless of where one stands on the issue at hand.