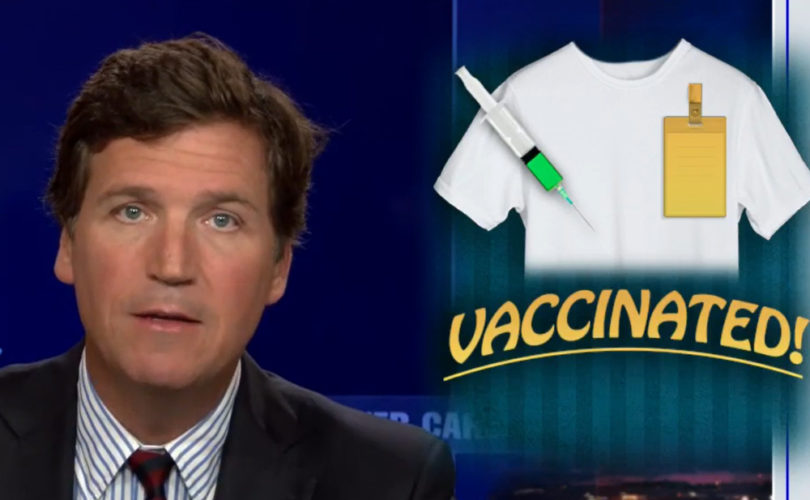 (LifeSiteNews) — The Biden administration urged Facebook to censor Fox News headliner Tucker Carlson for disputing the effectiveness of the COVID-19 vaccines, according to an email obtained by Louisiana Republican Attorney General Jeff Landry.

Landry, who has been working with Missouri Republican Attorney General Eric Schmitt to investigate online censorship, shared on Twitter an April 14, 2021 email from White House Director of Digital Strategy Rob Flaherty to Facebook complaining that the social network’s “top post about vaccines today is [T]ucker Carlson saying they don’t work. Yesterday it was Tomi Lehren [sic] saying she won’t take one.”

This, Flaherty said, suggested that Facebook’s “reduction” strategy for so-called “misinformation” was not working. In response, a Facebook official whose name was redacted said that they “saw the same thing” and were “running this down now.”

The email may have been referring to a segment from the same day in which Carlson questioned why Americans who received the vaccines, which were promised to protect against both severity and infection of the virus, were still being told to follow practices such as mask-wearing. That clip is still live on Facebook, but has since been given disclaimers alleging “missing context” and insisting the shots “go through many tests for safety and effectiveness.”

In fact, mounting evidence weighs against the effectiveness of the vaccines, which former White House COVID czar Dr. Anthony Fauci admitted last summer do not fare “overly well” at preventing infection, as well as their safety. The COVID shots were developed and tested in a fraction of the time vaccines usually take under former President Donald Trump’s Operation Warp Speed initiative.

The federal government’s Vaccine Adverse Event Reporting System (VAERS) reports 32,621 deaths, 185,412 hospitalizations, and 35,718 myocarditis and pericarditis cases as of December 2. An April study out of Israel indicates that COVID infection alone cannot account for such myocarditis cases, despite claims to the contrary. Reports submitted to VAERS about possible side effects are unconfirmed, as anyone can submit a report, but U.S. Centers for Disease Control & Prevention (CDC) researchers recognize a “high verification rate of reports of myocarditis to VAERS after mRNA-based COVID-19 vaccination,” leading to the conclusion that “under-reporting is more likely” than over-reporting.

In December, U.S. Sen. Ron Johnson (R-WI) hosted a roundtable discussion during which civil rights attorney Aaron Siri detailed data from the CDC’s V-Safe reporting system revealing that 800,000 of the system’s 10 million participants, or approximately 7.7 percent, reported needing medical care after COVID injection. “25 percent of those people needed emergency care or were hospitalized, and another 48 percent sought urgent care,” Siri added. “Also, another 25 percent on top of the 7.7 percent reported being unable to work or go to school.”

Another study by a team of American, British, and Canadian researchers, published December 5 in the Journal of Medical Ethics, found that COVID booster mandates for university students – a relatively healthy group at relatively low risk from the virus – do far more harm than good: “per COVID-19 hospitalization prevented, we anticipate at least 18.5 serious adverse events from mRNA vaccines, including 1.5–4.6 booster-associated myopericarditis cases in males (typically requiring hospitalization).”

The revelation of the Biden administration’s appeal to Facebook comes as fellow social network Twitter, which is now under the ownership of free speech advocate Elon Musk, releases a trove of documents detailing how the previous management similarly worked to suppress conservative views and information, including by fielding and complying with similar requests from government officials.