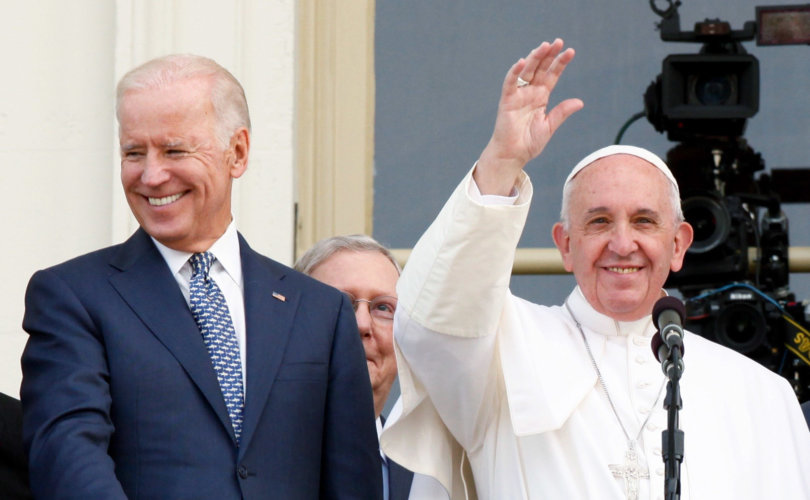 (LifeSiteNews) — White House Press Secretary Jen Psaki announced Thursday that President Joe Biden will meet with Pope Francis at the Vatican on October 29 to discuss “working together on efforts grounded in respect for fundamental human dignity, including ending the COVID-19 pandemic, tackling the climate crisis, and caring for the poor.”

Pope Francis’ and Biden’s shared “respect for fundamental human dignity” does not include the dignity of unborn children, which Biden has repeatedly ignored and actively sought to undermine during his presidency. Despite Biden’s radical promotion of the legalized killing of unborn children through abortion, media outlets are predicting that, consistent with his past meetings with pro-abortion public figures, Pope Francis will remain silent on abortion while with the Bidens.

Even before his inauguration, Biden was predicted to be “the most pro-abortion president in history” by self-described “pro-life liberals” writing for the Wall Street Journal. Biden has been repeatedly slammed by U.S. bishops for the extreme support of abortion he has since put into practice.

“He likes to call himself a devout Catholic. I would urge him to begin to act like one, especially on the life issues,” Archbishop Joseph Naumann, head of the United States Conference of Catholic Bishops (USCCB) Committee on Pro-Life Activities, told EWTN News Nightly on October 8.

In September, Biden said that he had instructed the Department of Justice to look for ways to block the Texas Heartbeat Act, a near-total abortion ban that allows private citizens to sue anyone who facilitates an abortion after six weeks of pregnancy.

In response to Biden’s call for a “whole-of-government effort” against the law, Department of Health and Human Services head Xavier Becerra announced his department would direct additional funding to abortion centers in Texas.

While Pope Francis repeatedly condemned abortion as “murder,” he does not speak with pro-abortion figures about the Church’s position on the obligation of public officials to uphold the right to life.

Earlier in his presidency, in addition to ditching the Hyde Amendment that had prohibited taxpayer funding for abortion, Biden asked Congress to disregard rules disallowing the use of tax dollars to fund abortion overseas.

Pope Francis made no mention of abortion while meeting with Speaker of the House Nancy Pelosi on Saturday. Pope Benedict XVI had reaffirmed the Church’s position on the sanctity of life and the related obligations of lawmakers during his own 2009 meeting with Pelosi.

In June, the U.S. bishops voted to move forward with drafting a document that would address the need for all Catholics to receive our Lord in Holy Communion only in a state of grace, prompting Cardinal Blase Cupich of Chicago to protest what he saw “an expectation” that we deny communion to the president, Speaker Pelosi, and others.

Just weeks ago, Pope Francis suggested that denying even an obstinately pro-abortion politician communion is a “political” and not “pastoral” act, advising clergy, “If you say you can give or not give [the Eucharist], this is casuistry.” He added that he has never denied Holy Communion to anyone.

Biden’s upcoming official visit to the Vatican will be the first since his inauguration, prior to which he had received “blessings and congratulations” from Pope Francis.