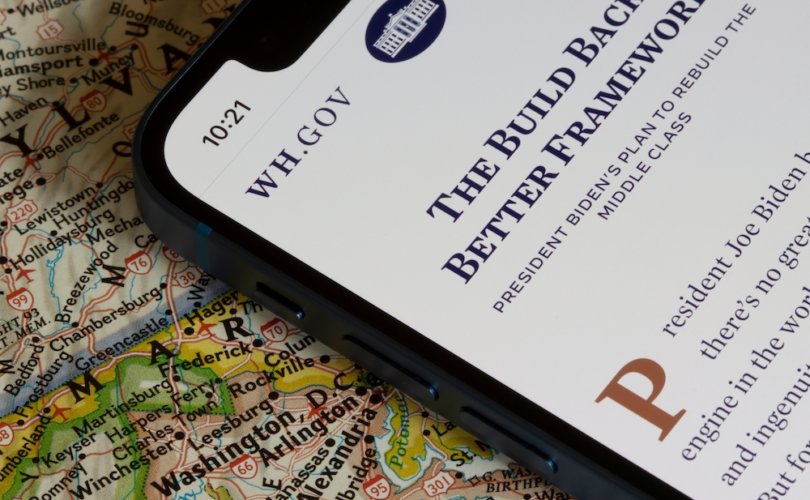 The potentially $4.8 trillion bill, packed with spending for progressive priorities, would subsidize child care costs and provide free pre-kindergarten for six years for $400 billion. Other provisions include $550 billion for “climate change” initiatives, billions in tax breaks to blue state millionaires and labor unions, and a potential $100 billion overhaul of the immigration system.

Provisions in the BBB would extend federal nondiscrimination rules to child care centers that receive funding through the bill and explicitly label them federal financial recipients.

Among the nondiscrimination laws that would apply to providers is Title IX, which bars “discrimination on the basis of sex.” Earlier this year, the Biden administration announced that it will enforce Title IX against “discrimination” based on “sexual orientation” and “gender identity” – a move currently being challenged by 20 Republican states.

The bill’s language would “change the rules” of child care in “an intentional effort to bring all of these programs under the moral revolution mandated by the federal government,” Dr. R. Albert Mohler Jr., president of the Southern Baptist Theological Seminary noted.

“It’s a change from funding these programs through block grants given to the states to changing the situation to direct funding by federal programs,” he said. The shift “means that religious institutions and religious organizations would not be able to operate these schools in a way consistent with their own beliefs, especially when it comes to the gender and sexual morality revolution, the entire array of issues, most importantly summarized as LGBTQ.”

For example, the BBB could prohibit funding to organizations that teach religious content, refuse to hire homosexuals, or give preference to applicants based on their faith, The New York Times reported. Christian groups have warned that such consequences will naturally exclude them from participation, hindering their religious freedom and those of the parents they serve.

“As a general rule, Catholic schools and most nonpublic schools purposefully avoid federal financial recipient status, because it triggers a whole host of federal regulatory obligations with which nonpublic schools are not currently required to comply,” Michael B. Sheedy, executive director of the Florida Conference of Catholic Bishops, wrote in a letter to Republican Sen. Marco Rubio last month. “The provisions of most obvious concern include nondiscrimination provisions related to sexual orientation and gender identity that could create religious freedom issues for religious providers.”

The new child care requirements were authored by Virginia Democrat Rep. Robert Scott, chairman of the Education and Labor Committee, and pushed by the Congressional Black Caucus. Democratic Sen. Joe Manchin of West Virginia is reportedly opposed to the changes and has lobbied Senate Democrats against them, according to The New York Times.

In another shot at faith-based providers, the Build Back Better Act also singles out facilities “primarily used for sectarian instruction or religious worship” or “in which a substantial portion of the functions of the facilities are subsumed in a religious mission,” prohibiting any funds to renovate or repair such buildings.

“This carveout is unconscionable; it’s also potentially unconstitutional,” Patrick T. Brown and W. Bradford Wilcox wrote in Deseret News. “Progressives are so concerned about one cent of public money going to support the workings of a place of worship that they’d rather bar them from benefiting from money intended to expand child care access.”

Hundreds of millions for ‘pregnant individuals’

Another part of the bill, titled “Maternal Mortality,” directs hundreds of millions of dollars for research and education on health risks facing pregnant women – but with a pro-LGBT slant.

At least half of the bill’s 15 sections on maternal mortality replace the words “women” or “mothers” with gender-neutral phrasing, using pro-transgender terms like “pregnancy individuals” more than a dozen times.

Among other things, that money can also be used for training on “addressing stigma associated with maternal health conditions and substance use disorders” in pregnant or recently-pregnant “individuals,” particularly among racial minority groups.

Another section provides $85 million in grants to medical schools “for identifying and addressing health risks associated with climate change” for “pregnant individuals.” Other uses include “developing, integrating, and implementing curriculum and continuing education” on “implicit and explicit bias, racism, and discrimination in providing care to pregnant, lactating, and postpartum individuals and individuals with the intent to become pregnant.”

In other words, the BBB green-lights tens of millions dollars in taxpayer funding to medical schools across the country to design and implement pro-LGBT training to promote transgender ideology.

The act takes wokeness a step farther in a later section that would plow $50 million into “systematic processes of listening to the stories of pregnant and postpartum individuals from racial and ethnic minority groups” to “inform potential solutions” maternal mortality and morbidity issues.

The maternal mortality sections in the Build Back Better Act were derived from the pro-LGBT “Black Maternal Health Momnibus Act” sponsored by Democratic Illinois Rep. Lauren Underwood and backed by House Democrats’ socialist “Squad.” The Momnibus Act states that “proper care that birthing people deserve is inclusive,” regardless of “gender identity.”

Other radical LGBT carveouts in Build Back Better include a $15 million to create “technical assistance centers” “focused on providing services for older individuals who are underserved due to their sexual orientation or gender identity.” Yet another section allots $150 million over four years for research grants on “detection and prevention of disparities” in the bill’s paid leave program, including in relation to “sexual orientation” and “gender identity.”

Thirteen GOP congressmen voted for the IIJA, as did 19 Republican senators, including Sen. Lisa Murkowski of Alaska and Sen. Chuck Grassley of Iowa, both of whom are running for re-election next year.

“With this legislation, the proverbial camel is in the tent. The LGBT agenda will only be limited to the wildest imagination of the most liberal judge,” Abraham Hamilton, general counsel for the American Family Association, commented. “And when this happens, you can thank these 19 Republicans who created the roads and bridges that could jeopardize religious liberty in the name of sexual deviancy.”