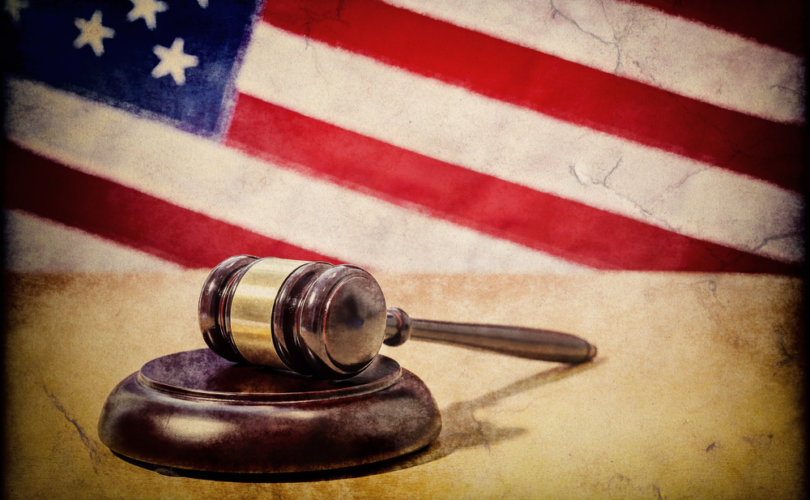 The Biden administration ordered in September that federal contractors must have received a full regimen of an abortion tainted COVID shot before December 8 or face losing their jobs with the government, later delaying the deadline to January 4, 2022.

After Kentucky Attorney General Daniel Cameron (R) challenged the Biden administration’s requirement, Van Tatenhove ordered that the federal government be “enjoined from enforcing the vaccine mandate for federal contractors and subcontractors in all covered contracts in Kentucky, Ohio, and Tennessee.”

The judge prefaced his order by clarifying the narrow confines by which the ruling was determined, stating that the case was neither about whether “vaccines are effective,” nor “whether the government, at some level, and in some circumstances, can require citizens to obtain vaccines.” Both considerations, he said, are true.

Rather, Van Tatenhove argued that the ruling hinged on the president’s use of “congressionally delegated authority to manage the federal procurement of goods and services to impose vaccines on the employees of federal contractors and subcontractors.” Answering whether Biden lawfully wields this authority, the judge determined that “[in] all likelihood, the answer to that question is no.”

“These questions will not be finally resolved in the shadows. Instead, the consideration will continue with the benefit of full briefing and appellate review. But right now, the enforcement of the contract provisions in this case must be paused,” he added.

The Louisiana judge likewise issued a preliminary injunction on Biden’s vaccine mandate, this time barring the enforcement of penalties against healthcare employees who work at facilities receiving Medicare or Medicaid funding nationwide but have elected not to receive one of the experimental COVID jabs.

Biden ordered that such healthcare employees, like federal contractors, must have received their second dose of the jab before January 4 or face “termination of the Medicare/Medicaid Provider Agreement.” The ruling affects some 10.3 million healthcare workers.

A request to suspend the mandate from Louisiana Attorney General Jeff Landry (R) was granted by Doughty in a 34-page ruling handed down Tuesday afternoon, echoing that of Judge Matthew Schelp who, on Monday, ordered the ceasing of Biden’s “vaccine” mandate for healthcare workers in ten states.

Doughty’s order, which extends across all 50 states, halts “the U.S. Department of Health and Human Services and the Center for Medicare and Medicaid Services, along with their directors, employees, Administrators and Secretaries … from implementing the CMS Mandate (Centers for Medicare and Medicaid Services) … as to all healthcare providers, suppliers, owners, employees, and all others covered by said CMS Mandate.”

Landry heaped praise on the judge, saying he is “pleased the Court granted preliminary relief against the President’s unconstitutional and immoral attack on not only our healthcare workers but also the access to healthcare services for our poor and elderly.”

“I will see this case through to the end,” he continued, “fighting every step of the way to prevent the federal government from imposing medical tyranny on our citizens and turning last year’s healthcare heroes into this year’s unemployed.”

The judge argued in his ruling that to allow the Biden administration to implement its COVID shot requirement would be unconstitutional.

“If the executive branch is allowed to usurp the power of the legislative branch to make laws, two of the three powers conferred by our Constitution would be in the same hands,” Doughty wrote, adding that “indefinite states of emergency” threaten civil liberties.

“During a pandemic such as this one, it is even more important to safeguard the separation of powers set forth in our Constitution to avoid erosion of our liberties … it is important to preserve the status quo in this case. The liberty interests of the unvaccinated requires nothing less,” the judge wrote.

Meanwhile, following the intervention of the U.S. Court of Appeals for the Fifth Circuit, the U.S. Department of Labor’s Occupational Safety and Health Administration (OSHA) announced November 12 that it will not enforce Biden’s sweeping rule requiring “all employers with 100 or more employees to ensure their workforce is fully vaccinated or require any workers who remain unvaccinated to produce a negative test result on at least a weekly basis before coming to work.”

Judge Kurt Engelhardt deemed the mandate a substantial burden on “the liberty interests of reluctant individual recipients” as well as the companies forced to impose the rule. Further, he wrote, Congress did not intend OSHA “to make sweeping pronouncements on matters of public health affecting every member of society in the profoundest of ways.”

The Fifth Circuit ordered OSHA to “take no steps to implement or enforce” the Emergency Temporary Standard (ETS) “until further court order.” OSHA subsequently updated its website, stating its intention to comply: “OSHA has suspended activities related to the implementation and enforcement of the ETS pending future developments in the litigation.”