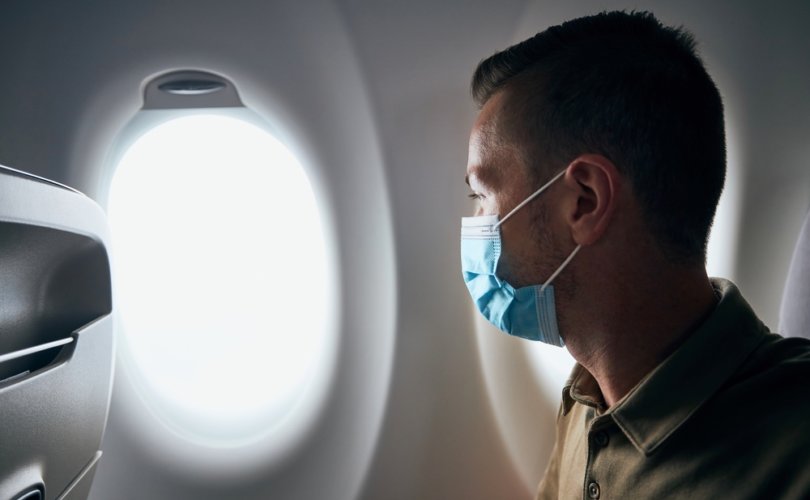 WASHINGTON, D.C. (LifeSiteNews) – The Department of Justice (DOJ) on Tuesday asked an appeals panel for the 11th District Court to reverse a decision that overruled the Centers for Disease Control and Prevention’s (CDC) travel mask mandate in response to a lawsuit.

Many of the arguments dealt with the speed at which the CDC’s mandate was enacted, Reuters reported. Brian Springer, a lawyer for the DOJ, argued that the mandate, which the CDC put in place in the first days of the Biden administration in January 2021 without a public comment session as required by the Federal Provisions Act, was necessary for public health.

According to Springer, the mandate going into effect immediately was necessary “to prevent the possible infections and deaths that could result if people didn’t do the simple thing of just putting on a mask while they were traveling.”

A lawyer for the DOJ also claimed that “[w]earing a mask was one of the most modest and most effective means available in early 2021 to combat the spread of COVID-19 and to allow air travel to resume safely. The CDC had authority to issue this order, and to do so to make the order effective immediately, and the district court erred in ruling otherwise.”

A lawyer representing the plaintiffs in the original lawsuit rejected the DOJ’s argument, noting that the CDC did not file a stay on the ruling that struck down the mandate. A lawyer representing the Health Freedom Defense Fund, one of the original plaintiffs, made a similar argument, stating: “This appeal is not about an urgent matter of public health. If the mask order had been such an urgent matter of public health, you would have expected CDC to have applied for a stay to the district court’s ruling.”

The panel seemed less favorable towards the DOJ’s claim that the CDC had “good cause” to impose the mandate without a public comments period. One of the three judges on the panel said that the “problem I’m having with your entire argument on this issue is that it seems like you’re saying the agency can just say we think this is a good idea.”

A lawyer for the DOJ responded by asking the court to rule that the CDC could impose the mask mandate, regardless of how the court would eventually rule with regard to the immediacy of the mandate.

“You can imagine the next pandemic, [if] there was an outbreak of measles or SARS and the CDC would want to and need to take swift action in order to control such a pandemic in the future,” an attorney for the DOJ argued. “I think the important thing here is that the potential collateral estoppel effect of the district court’s ruling could tie up future CDC actions.”

The original lawsuit was filed by Health Freedom Defense Fund, an organization that challenged COVID mandates in the past, on behalf of two women who contended that wearing masks on airplanes exacerbated anxiety and panic attacks. According to the lawsuit, the CDC acted beyond its authority in enacting the mandate, that as the mandate acted as a rule rather than an order, the agency failed to hold a public comments section for the mandate as required by federal law, and that the mandate was arbitrary.

In response to the suit, U.S. District Judge Kathryn Kimball Mizelle ruled in favor of the plaintiffs, noting in her opinion that the CDC had overstepped its authority in imposing the mandate. The DOJ announced shortly thereafter that it would appeal Mizelle’s ruling, and the White House responded to her decision by calling it “disappointing.”

While still in place, the rule had become increasingly controversial in the months preceding Mizelle’s ruling, with numerous states, lawmakers, and even airline executives calling on the federal government to drop the rule.

In March 2022, for instance, airline industry executives from 10 major U.S. airlines joined forces to write a letter urging the Biden administration to drop its “now-outdated” mask mandate for airports and airplanes. The letter directed to President Biden came after the CEOs of Southwest Airlines and American Airlines testified in a December Senate committee hearing that masks did little, if anything, to stop the spread of COVID-19 on planes.

In September, President Biden declared in a television interview with CBS that the COVID-19 pandemic “was over.” The White House later walked back the president’s comments and said it wouldn’t change its COVID policy. Moreover, the  administration extended the COVID national emergency earlier this month, the twelfth extension since the emergency was first declared in 2020.

Earlier this week, Republican Congressman Brett Guthrie of Kentucky introduced the Pandemic is Over Act, which would end the COVID national emergency.