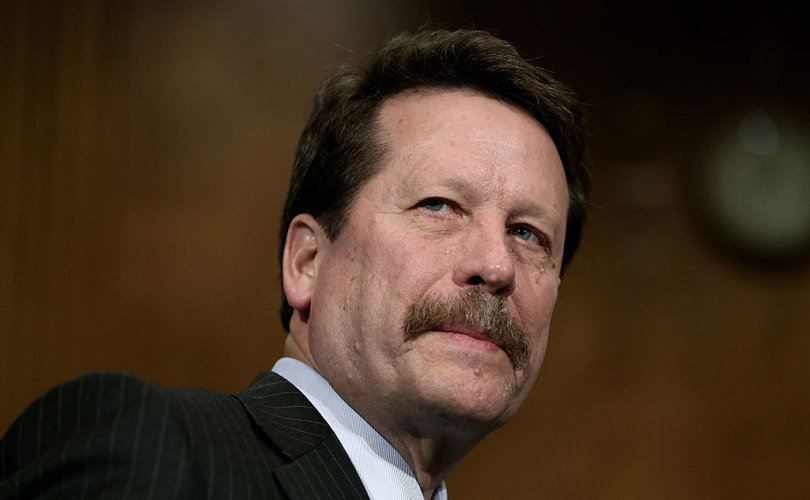 (LifeSiteNews) — President Joe Biden’s nominee to lead the FDA expanded the use of the abortion pill Mifeprex and has been a paid consultant to dozens of pharmaceutical companies, including COVID vaccine manufacturers Pfizer, Johnson & Johnson, and AstraZeneca.

“Dr. Robert Califf is one of the most experienced clinical trialists in the country, and has the experience and expertise to lead the Food and Drug Administration during a critical time in our nation’s fight to put an end to the coronavirus pandemic,” said the White House in a press release announcing the nomination.

The White House statement signals that Califf will be involved in approving more COVID vaccines and potentially other COVID treatments. Biden continued, “As the FDA considers many consequential decisions around vaccine approvals and more, it is mission critical that we have a steady, independent hand to guide the FDA. I am confident Dr. Califf will ensure that the FDA continues its science and data driven decision-making.”

If his appointment is approved by the Senate, this will not be Califf’s first time serving at the FDA. A professor of cardiology at Duke University and founder of its prestigious Duke Clinical Research Institute, Califf was previously appointed as Deputy Commissioner of the FDA in January 2015. Eight months later, he was nominated to lead the FDA by President Obama.

Califf’s 2016 Senate confirmation hearing spotlighted his extensive experience and relationships with the pharmaceutical industry and his potential conflicts of interest. Sen. Elizabeth Warren (D-MA) probed him on these points, stating, “Your financial relationship with the industry also raises questions about what your priorities will be if you are confirmed with this job. Many in the pharmaceutical and device industry spend a lot of time and money arguing that the FDA is just too tough, that we should lower the FDA standards on safety and effectiveness.”
“Dr. Califf, do you agree with these arguments and recent efforts by some lawmakers to lower the standards for FDA approval of drugs and devices?” she asked.

Califf responded that he was only in favor of raising standards, not lowering them, by using “better studies that show the full gamut of risk and benefit for the time that a treatment might be used.” Given his regular compensation by big pharma and later track record leading the FDA, however, it is difficult to take Califf at his word.

Regarding Califf’s previous and most recent nomination, Senator Joe Manchin (D-WV) agrees with this assessment, stating, “Dr. Califf’s nomination and his significant ties to the pharmaceutical industry take us backwards not forward.”

Indeed, Califf’s decades-long history of medical research at Duke necessarily connected him with dozens of pharmaceutical companies, many of which engaged him as a paid consultant. Information formally disclosed by Califf to the International Committee of Medical Journal Editors in January 2016 confirms this, showing that in the three years prior to the disclosure, Califf worked extensively for dozens of pharmaceutical giants, including current COVID vaccine manufacturers Pfizer, AstraZeneca, and Johnson & Johnson.

His current Pro-Public Dollars for Docs profile provides some further insight about his monetary compensation from drug companies over the years, but does not reveal the extent of his consultancies as demonstrated on the disclosure. Previous Dollars for Docs reports also noted that he received $87,500 from Johnson & Johnson in 2012, but the current website no longer provides the monetary compensation data for Califf prior to 2013.

Two months after his 2016 confirmation hearing Califf unexpectedly loosened restrictions on the abortifacient drug Mifeprex, also known as mifepristone or RU-486. The decision allowed the abortion regimen to be used by women up to 10 weeks pregnant, whereas previously the drug had only been allowed for use for abortion up to 7 weeks of pregnancy.

The significance of widening the drug’s use cannot be understated. The Guttmacher Institute, Planned Parenthood’s research arm, estimates that the drug accounted for approximately 39% of all abortions annually, as of 2017. Danco Laboratories, a drug manufacturer started by private pro-abortion investors and organizations for the sole purpose of creating the abortion pill, is the only government-approved producer and distributor of Mifeprex in the U.S.

In response to the FDA’s decision, Senator James Lankford (R-OK), Representative Chris Smith (R- NJ), and other pro-life congressmen penned a formal inquiry to Califf, demanding all of the data, research, and related communications that engendered the FDA’s decision to expand use of Mifeprex. To date, the FDA has not publicly disclosed this information.

While the beginning of the Trump administration brought Califf’s first stint as FDA commissioner to an end, it also initiated a new chapter in his career: Califf was hired by Alphabet, Inc., the parent company of Google and Verily, to be its Head of Medical Strategy and Policy. It is a position he still holds.

Califf began his public association with Alphabet during his time at Duke working in the Duke AI Health program. The project, which is supported by Alphabet, aims to enhance the delivery of health care and medicine by improving machine learning (artificial intelligence) using predicative analytics and data-sharing across multiple disciplines. According to a Verily spokesperson, Califf’s current primary responsibilities at Alphabet are to counsel the company executives regarding the clinical facets of potential medical products and services under consideration at Alphabet.

Few other specifics of Califf’s official duties at the tech giant have been made public. The recent, coordinated efforts by big technology corporations to shut down meaningful conversation and truth sharing about effective COVID treatments, concerns about the vaccines, and other issues on social media raise questions about what, if any, involvement in these moves Califf had as Alphabet’s chief health strategist.

Califf’s latest Senate confirmation hearing is scheduled for December 14 at 10 a.m. However, his widening of the abortion pill’s use, resultant lack of transparency about the decision, and history of working for special interests do not inspire confidence about his work on the public’s behalf and protection for human life. If anything, they suggest that his distinction in medicine is second only to his ability to influence and game the drug approval system and achieve favorable political and economic results for drug and medical device manufacturers. Califf’s record shows that providing him another turn at the FDA’s top post would be a disservice to the American people, one that is akin to giving the fox the keys to the hen house.

Please contact your Senators and Congressional Representatives to voice your concerns about Califf’s nomination.

Editor’s note: This article has been updated with the date and time for Califf’s Senate hearing.