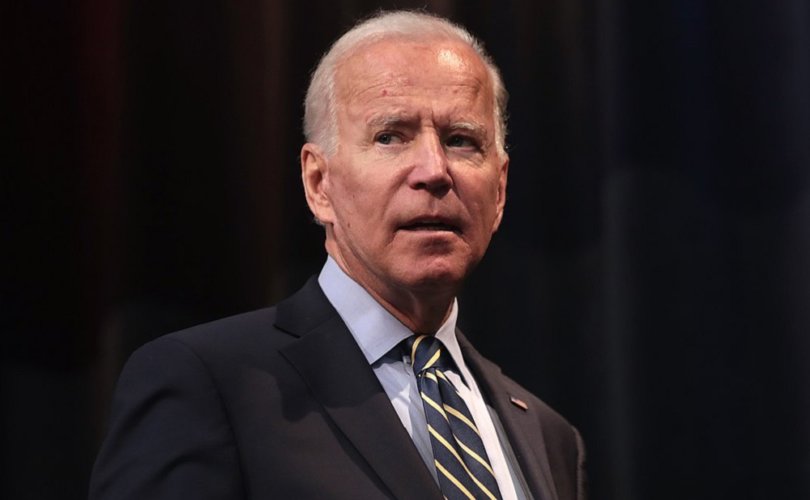 (LifeSiteNews) – Religious freedom and economic stability in Joe Biden’s America could take a major hit in the coming months.

The bill, which watchdogs warn actually costs closer to $5 trillion, will likely come just before the House is scheduled to take up the Senate’s $1 trillion “bipartisan” infrastructure bill later this month, depending on infighting between far-left House progressives and “moderate” Democrats.

Taken together, the two bills, which rival the $4 trillion, in today’s money, that the U.S. spent fighting the entire Second World War, threaten to impose an extreme, pro-abortion, pro-LGBT agenda and a raft of socialistic economic policies to all but remake America as we know it.

A small section of the Senate infrastructure bill, titled the Infrastructure Investment and Jobs Act (IIJA), promises to devastate the liberties of American Christians and anyone else holding to a traditional, biological understanding of human sexuality and gender.

Page 2149 of the almost 3,000-page bill declares “gender identity” and “sexual orientation” to be federally-protected classes, like race or disability:

This provision “would severely undermine religious freedom in America, and tacitly affirm the pernicious, false message that the sexual morality historically taught by Judaism, Christianity, and Islam is bigoted and akin to racism,” the Religious Freedom Institute has warned.

“Rural faith-based colleges and universities, small faith-based businesses, and religious hospitals and medical clinics, sometimes providing the only healthcare services for miles, could be forced to violate their religious conscience or be denied participation in the program.”

Every Democrat and 19 Republicans in the Senate voted for the IIJA, nevertheless, and did so even without reading the mammoth bill, which was released hours before a floor vote last month.

“With this legislation, the proverbial camel is in the tent. The LGBT agenda will only be limited to the wildest imagination of the most liberal judge,” Abraham Hamilton, general counsel for the American Family Association, commented. “And when this happens, you can thank these 19 Republicans who created the roads and bridges that could jeopardize religious liberty in the name of sexual deviancy.”

Archbishop Paul Coakley, who chairs the U.S. bishops’ “domestic justice and human development committee,” said in August that the conference was actually “grateful” for the bill, citing possible “creation of new jobs” and “climate change” measures. Coakley briefly noted his “disappointment” about the IIJA’s assault on core Catholic teaching, though only after calling for additional federal spending and “a path to citizenship” for illegal immigrants.

The full impact of the budget reconciliation bill on religious liberties is not yet clear, but it appears poised to fund abortion, based on language drafted by the House Energy and Commerce Committee. The committee’s proposal would develop a Medicaid expansion program that lacks Hyde amendment protections, advancing the Biden administration’s goal of taxpayer funding for abortion on demand.

The U.S. Conference of Catholic Bishops has said nothing at all on that provision. The bishops’ migration committee chairman, Bishop Mario Dorsonville, however, immediately hailed Democrats’ move to legalize millions of migrants with their partisan budget bill.

‘A lot of pain’ under socialist Democrats

Contrary to Coakley’s statement, the infrastructure bill will not spur any notable economic growth, though it will add hundreds of billions of dollars to the national debt.

The University of Pennsylvania Penn Wharton Budget Model (PWBM) last month found that the legislation would “have no significant effect on GDP” or productivity. “Overall, workers’ productivity is unchanged, which is reflected in wages that do not change in 2040 and 2050,” the PWBM report read. “Overall, GDP does not change in 2031, 2040, or 2050.”

Meanwhile, the Congressional Budget Office (CBO) has predicted that the IIJA will load the federal deficit with an additional $340 billion in debt over the next ten years, although that figure may be an undercount.

The $3.5+ trillion budget reconciliation bill unsurprisingly would add even more to the debt, while also drastically hampering America’s post-COVID recovery.

Another report by PWMB last week estimated that the Democrats’ budget monstrosity will result in a four percent drop in GDP by 2050, with a 6.1 percent decline in private capital and a 8.9 percent increase in government debt. A reduction in private capital (meaning “computers, equipment, factories, buildings, and other productive assets”) “leads to lower wages as workers become less well-equipped to do their jobs effectively,” PWMB warned.

At the same time, the budget bill, which green-lights $1.75 trillion in new borrowing, threatens to skyrocket the national debt to historic levels.

“Rather than laying the groundwork to put debt on a stable and downward path relative to the economy, the Senate’s budget blueprint would see debt increase to 119 percent of GDP by 2031 and would blow past prior records as a share of the economy in just five years’ time,” according to the Committee for a Responsible Federal Budget.

The bill’s extra borrowing will add to an already exploding federal deficit. Last September, the CBO estimated that the debt would not surpass $29 trillion until 2028, as Trump administration statistics adviser John Lott recently noted.

Just a year out, the deficit now sits at over $28.7 trillion, more than the combined GDP of China, Germany, and Japan.

“Adding all this up, a $40 trillion federal debt is likely within a couple of years,” Lott wrote. “Estimates that the debt will reach $50 trillion by 2030 are not particularly remarkable given the current pace.” “All this means a lot of pain,” he said.

“If we can’t stop the runaway national debt, it will require much higher taxes and dramatic cuts in spending. For older people looking out for threats to Social Security and Medicare, this is it.”

To pay for their tax-and-spending spree, congressional Democrats have outlined trillions of dollars in tax hikes, including a 26.5 percent corporate tax rate for large businesses, much of which will inevitably be passed onto consumers.

And the Democrats’ expansive tax program will eventually impact even low-income households, breaking yet another Biden campaign promise. (Media outlets and labor unions, on the other hand, will get billions in tax breaks).

The spending package also comes amid an accelerating inflation crisis, driven by the government’s already unprecedented COVID-era spending. Inflation has pushed food prices up by nearly 13 percent since last year, while gas prices have soared more than 40 percent.

That may be just what the Democrats want. Biden’s “Build Back Better” agenda, the central component of which is the multi-trillion-dollar socialist spending plan, unsubtly takes its name straight from the slogan of the World Economic Forum’s (WEF) globalist “Great Reset” program “to revamp all aspects of our societies and economies” and “reimagine capitalism.”

“Every country, from the United States to China, must participate, and every industry, from oil and gas to tech, must be transformed,” WEF founder Klaus Schwab has said of the initiative. “In short, we need a ‘Great Reset’ of capitalism.”

Joe Biden has echoed those words, calling for an end of the “era of shareholder capitalism” and “revolutionary, institutional changes” within the U.S. “The notion of a reset is more important than ever before,” John Kerry, Biden’s special climate envoy, affirmed at an event hosted by the WEF in November. “I personally believe … we’re at the dawn of an extremely exciting time.”