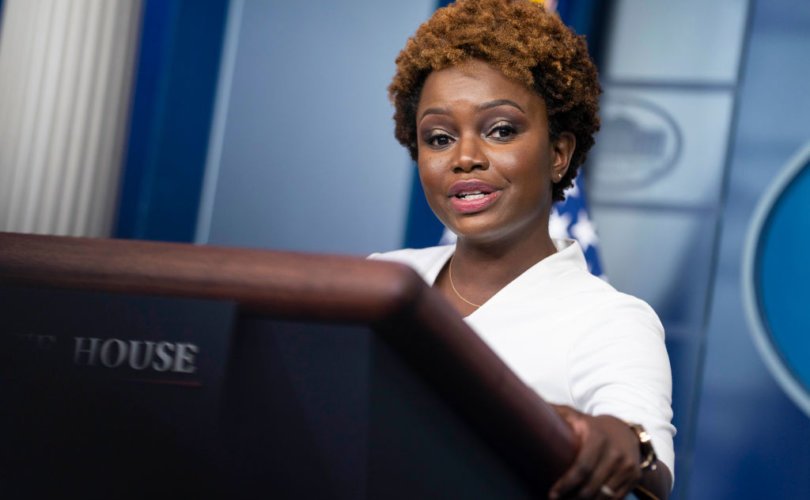 Fox News reports that Republican Gov. Kevin Stitt has signaled his support for HB 4327, which bans any procedure that “cause[s] the death of an unborn child” except in cases of rape, incest, or to save a mother’s life. Like the Texas Heartbeat Act, it would be enforced via civil suits brought by Oklahoma residents, punishable by at least $10,000 per abortion.

“The President believes that women have the fundamental right to make their own reproductive health choices,” Jean-Pierre said, claiming that because Roe “has been the law of the land for almost 50 years,” “basic fairness and the stability of our law demand that it not be overturned.”

“Today’s action by the Oklahoma legislature is the most extreme effort to undo these fundamental rights we have seen to date,” she continued. “In addition, it adopts Texas’ absurd plan to allow private citizens to sue their neighbors for providing reproductive health care and helping women to exercise their constitutional rights.”

“This is part of a growing effort by ultra MAGA officials across the country to roll back the freedoms we should not take for granted in this country,” Jean-Pierre claimed. These Republicans “are starting with reproductive rights, but the American people need to know that other fundamental rights, including the right to contraception and marriage equality, are at risk.”

While many Christians hold moral objections to contraception use, and originalist conservatives would like to see an overturn of 2015’s Obergefell v. Hodges, which forced all fifty states to recognize same-sex “marriages,” there is currently no indication that the Supreme Court is inclined to reverse it or ban contraception, or that the Republican Party is interested in fighting for such moves. Nevertheless, stoking such fears has quickly become one of Democrats’ favored tactics.

During his first week in office, Biden repealed the Mexico City Policy, which bars foreign aid from going to organizations involved with abortion; two months later, he created a White House Gender Policy Council that identified among its goals the promotion of abortion at home and abroad. Earlier this year, the U.S. Department of Health & Human Services launched a Reproductive Healthcare Access Task Force tasked with identifying and eliminating pro-life policies that remain in existing federal programs, advancing new pro-abortion policies and guidances, and supporting efforts to normalize abortion by mitigating its stigmatization.

— Article continues below Petition —
PETITION: Call on Biden to condemn violent pro-abortion rioters across America!
Show Petition Text
20959 have signed the petition.
Let's get to 22500!
Thank you for signing this petition!
Add your signature:
Show Petition Text

Biden also supports Democrat legislation to not only codify a “right” to abortion in federal law, but expand it to forbid states from subjecting abortions to ultrasound requirements, mandatory waiting periods, informed-consent requirements, and other health and safety regulations, such as admitting privileges; as well as protect so-called “webcam” abortions (i.e., dispensing abortion pills without an in-person doctor’s visit), forbid banning abortions on the basis of a baby’s race, sex, or disability, and forbid banning particular techniques such as dilation and evacuation (D&E) procedures, better known as “dismemberment” abortions because they entail literally ripping unborn babies apart in the womb, then removing them from the uterus limb by limb.

As for Oklahoma, Stitt has previously signed a law making abortion a felony, without rape or incest exceptions, though that law’s fate ultimately rests with the U.S. Supreme Court’s impending ruling in Dobbs v. Jackson Women’s Health Organization, which is cautiously expected to overturn Roe v. Wade and restore the issue of abortion to the democratic process. By contrast, the Texas law’s enforcement mechanism has so far been allowed to take effect.