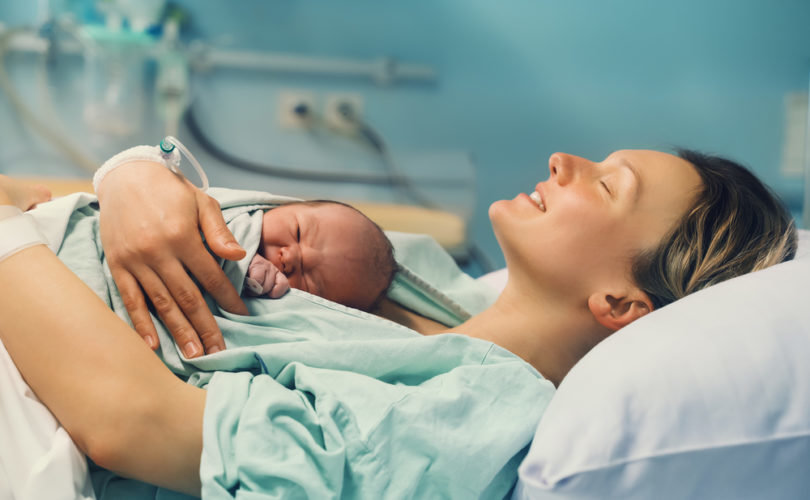 A mother with her newborn childShutterstock

Released on May 28, the 72-page proposal for the 2022 fiscal year includes a section detailing the budget’s provisions intended to reduce maternal mortality and end “Race-Based Disparities in Maternal Mortality.”

In a subsection under the heading entitled “Build Back Better,” a phrase tightly associated with the World Economic Forum’s Great Reset agenda, a radical global socialist plan which seeks to “press the reset button on capitalism, transforming everything about our society,” Biden’s budget earmarks over $200 million in spending to help end the “high rate of maternal mortality and race-based disparities in outcomes among birthing people.”

The use of the phrase “birthing people” in the budget comes after Missouri Congresswoman Cori Bush told Congress in May she was “committed to doing the absolute most to … protect black birthing people.”

Dr. Jennifer Roback Morse, founder of the Ruth Institute, a global non-profit dedicated to defending the family, told LifeSiteNews the phrase “birthing people” was “propaganda,” and suggested that the appearance of the term in official documents like the 2022 budget proposal is a way of “getting people worn down so that the word ‘mother’ is removed from their thought process.”

“Persons are being reduced to a collection of functions,” Morse added.

The author and co-author of five books has spoken around the world on topics relating to marriage, family and human sexuality. Morse was also a campaign spokeswoman for California’s Proposition 8 in 2008, which defined marriage as the union between a man and a woman, but was later overturned in the court system.

Morse said those who promote transgender ideology are “very sophisticated” at manipulating words to construct a new vision of reality. “You can’t use their language,” she said. “That’s not negotiable. You cannot use their language.”

Meanwhile, pro-abortion lobby group NARAL Pro-Choice America defended the use of the term “birthing people” in the proposed 2022 budget, tweeting on May 6, “We use gender neutral language when talking about pregnancy, because it's not just cis-gender women that can get pregnant and give birth. Reproductive freedom is for *every* body.”

Katy Faust, founder and director of Them Before Us, a non-profit committed to advancing social policies to defend the rights of children, told LifeSiteNews that using phrases like “birthing person,” which carries the implication that men are capable of bearing children, is “insisting on the imaginary” while “rejecting the biological reality” that only women can be mothers.

Faust, a regular contributor at The Federalist, said her organization “Them Before Us” profiles children who have experienced the loss of their mother or father, and said “the heart of a human child” wants “both their mom and dad.”

Children whose parents have “transitioned” to take on another gender identity, she said, experience the change as “a sort of death,” as the “gender-specific manifestation really mattered to them.”

“It’s too bad,” Faust said, “that this administration is negating not just biological reality, but … the cry of every child’s heart.”

Faust, who has advocated on behalf of children with lawmakers in the U.S. and overseas, including at the United Nations, said the 2022 budget’s formal adoption of the term “birthing people” amounts to “a massive power grab for the state.”

Faust said conservatives must “fortify themselves” and use their platforms to combat the rapidly changing definitions of words and the replacement of traditional concepts with new phrases that align with radical ideology and deny fundamental realities.

“You’re going to either align with reality, or you will have to constantly appease this ideological dystopia that the left is increasingly pushing.”

“So much of what they’re doing right now runs up against not just natural law in a philosophical sense but natural reality,” Faust said. “It’s unsustainable. The question is how many people’s lives, especially children’s lives, are they going to ruin in the meantime?”