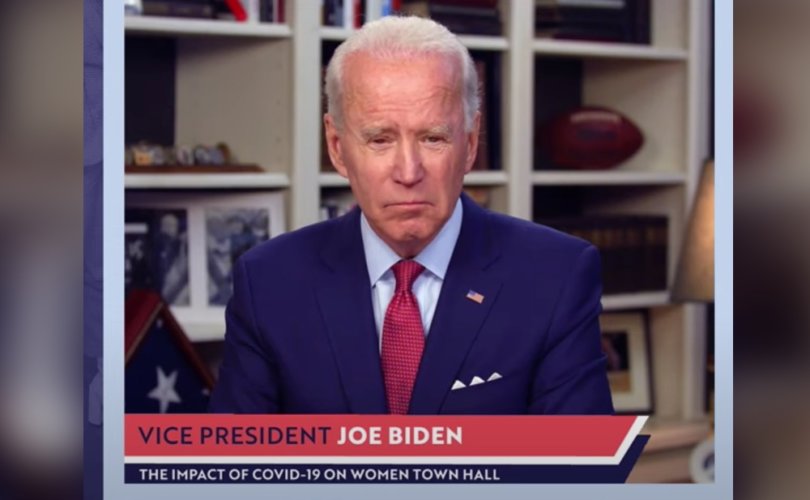 June 15, 2020 (LifeSiteNews) – Former Vice President and Democrat presidential nominee Joe Biden is narrowing the list of candidates to serve as his running mate against Donald Trump and Mike Pence, settling on a selection of left-wing women and black leaders.

All six Democrats are women; four are black. One is white (Warren), and one is Latina (Grisham). The sex of the finalists is presumably intended in part to mitigate the damage of allegations that Biden sexually assaulted former staffer Tara Reade in the early 1990s. The AP noted that Biden is under pressure to pick a black running mate as a show of support to the Black Lives Matter movement.

Biden has publicly declared that his running mate would be a woman, and claims his focus is on finding someone who would be “ready to be president” if necessary. Former Virginia Governor and Democrat National Committee chair Terry McAuliffe told the AP that Biden’s decision would most likely be “all about personal chemistry,” and that it would be “exciting for the party” to have a black woman on the Democrat ticket.

Whoever Biden selects, she is unlikely to meaningfully differ from the hard-left platform on which the former vice president is running. Every candidate in the 2020 Democrat primary field, including Harris and Warren, aggressively competed to be perceived as the staunchest defender of abortion-on-demand and the LGBT agenda, with little regard for the toll on religious liberty.

Biden himself, meanwhile, has declared abortion to be “essential health care” even during the COVID-19 emergency measures that suspended many forms of actual health care, vowed to reverse the Trump administration’s ban on gender-confused soldiers in the U.S. military, and called the COVID-19 crisis an opportunity to “fundamentally change the science relating to global warming.”

The question of Biden’s running mate could, however, take on greater significance should Biden become president.

Biden has been famously gaffe-prone for years, but the increasing frequency of his confused and incoherent statements this election season has provoked abundant speculation from friends and foes alike as to the 77-year-old contender’s mental fitness for the presidency, leading Biden to pledge to only serve one term “if anything changed in my health, making it incapable for me to fully exert all the energy and mental acuity that was needed to be done.”

Trump has repeatedly framed the opponent he dubs “Sleepy Joe” as generally unaware and incapable, and suggested that if Biden wins he will not be the one taking the lead in his administration. At the very least, Biden’s own single-term pledge indicates that his eventual running mate could become the de facto Democrat standard bearer sooner rather than later.