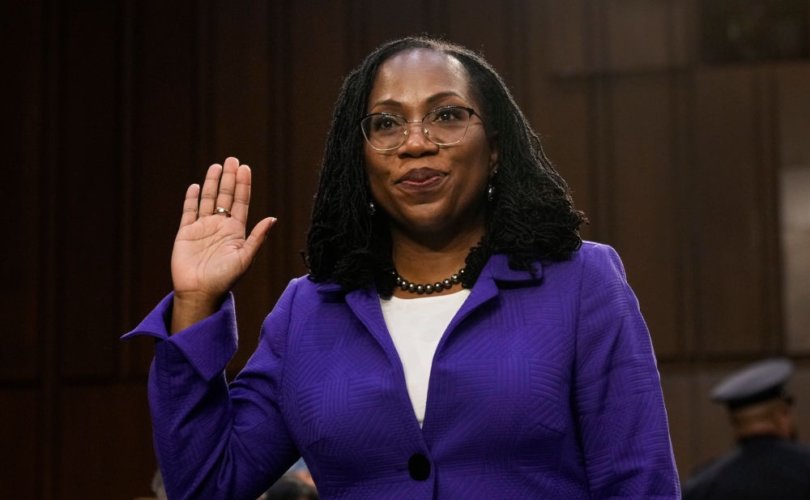 Biden’s Supreme Court pick, a Harvard graduate and former Barack Obama-appointed U.S. Circuit Court judge for the District of Columbia, is expected to side with the Court’s liberals against future pro-life legislation if confirmed.

Abortion protesters on both sides of the aisle clashed outside the Supreme Court on Monday as Judge Ketanji Brown Jackson began her confirmation hearings before the Senate Judiciary Committee.

Monday’s hearing began at 11 a.m. with opening statements from all 22 lawmakers on the Senate Judiciary Committee panel.

During Judge Jackson’s opening statement, she expressed gratitude for being nominated for the role and signaled her inclination to follow in the footsteps of her consistently liberal, pro-abortion predecessor Justice Stephen Breyer.

Breyer, 83, has consistently voted with the Court’s liberals and repeatedly ruled against pro-life legislation. He announced his plans to retire earlier this year.

“Justice Breyer not only gave me the greatest job that any young lawyer could ever hope to have, but he also exemplifies what it means to be a Supreme Court Justice of the highest level of skill and integrity, civility, and grace,” said Jackson, who worked as a law clerk for Breyer earlier in her career.

“It is extremely humbling to be considered for Justice Breyer’s seat, and I know that I could never fill his shoes. But if confirmed, I would hope to carry on his spirit,” she added.

Jackson clerked for Breyer when he ruled against a pro-life Nebraska law that would have banned partial birth abortions. After being nominated by President Biden, Jackson has received the warm approval of major abortion groups, including Planned Parenthood and NARAL.

In a statement released February 25, Susan B. Anthony (SBA) List president Marjorie Dannenfelser explained that in addition to being “backed by many of America’s most radical pro-abortion groups,” Jackson is “on record opposing the free speech rights of pro-life advocates pleading to save lives outside abortion centers and supporting the false claim that abortion is ‘health care.’”

Students For Life Action (SFLA) president Kristan Hawkins argued in a March 10 letter to the U.S. Senate opposing Jackson’s appointment to the Supreme Court that Jackson “would present a unique and profound threat to the work of the Pro-Life Generation.”

Meanwhile, the opening statements made by the Senate Judiciary Committee panelists gave a preview of the contentious topics set to be covered during the questioning period beginning Tuesday.

Democrat Sen. Diane Feinstein of California spoke about the abortion and environmental cases currently before the Supreme Court, saying those issues are “foundational to who we are as a country.”

“What concerns me, and I’ve been very candid about this, is that in every case, in each of these seven, Judge Jackson handed down a lenient sentence that was below what the federal guidelines recommended and below what prosecutors requested,” Hawley said. “And so I think there’s a lot to talk about there.”

Broadening the scope of the issues addressed during the hearing, Republican Sen. Marsha Blackburn of Tennessee spoke about transgenderism, sexuality, and gender identity with regard to the rights of parents to decide what children are taught about those concepts in schools.

“At a time when these parental rights appear to be under assault by the radical left, your public comments about, and I’m going to quote you, ‘the transformative power of progressive education,’ these are deeply concerning,” Sen. Blackburn said.

According to Blackburn, Jackson serves “on the board of a school that teaches kindergarteners, five-year-old children, that they can choose their gender, and teaches them about so-called ‘white privilege.’”

“The American people want a Supreme Court Justice who will protect their families’ freedoms, not allow government overreach into private family decisions,” she said.

Moms and dads are troubled by the progressive agenda being pushed in some of our public-school systems. Educators are allowing biological males to steal opportunities from female athletes in the name of progressivism. pic.twitter.com/pagIVPgZqx

In a video statement released Sunday, Blackburn had also suggested that Jackson supports the Supreme Court’s prior ruling in Griswold v. Connecticut, in which the Court determined that married couples have a “right to privacy” under which the government may not prohibit the use of contraception, paving the way for abortion legislation.

Though chosen to replace another liberal justice and therefore not likely to significantly tilt the balance of the Supreme Court, Jackson’s nomination has already been fraught with controversy.

Before naming Jackson, Biden made clear his pick would be a black woman, a decision that drew bipartisan backlash.

An ABC/Ipsos poll conducted in late January found that 76% of Americans wanted Biden to consider “all options” rather than select a nominee based predominately on considerations of race and sex.

The confirmation hearings for Jackson are slated to continue through Thursday, March 24, with the questioning phase set to begin Tuesday.