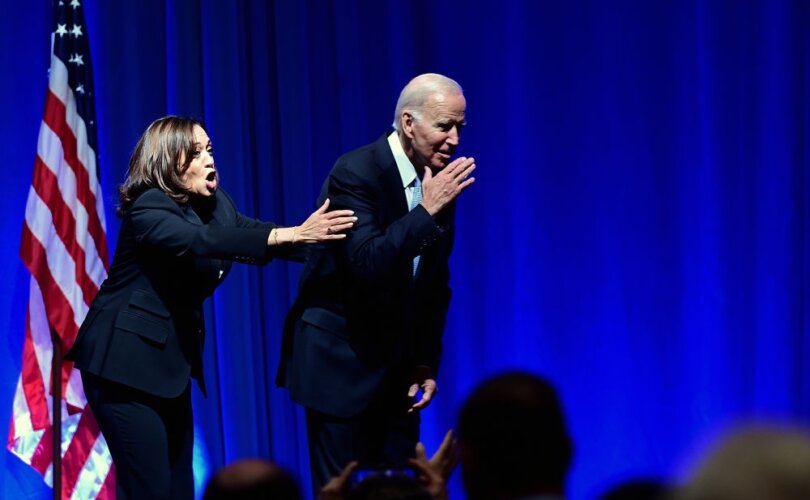 US President Joe Biden and US Vice President Kamala Harris react while greeting supporters during the Democratic Party's Independence Dinner on October 28, 2022 in Philadelphia, Pennsylvania. Photo by Mark Makela/Getty Images

(LifeSiteNews) — The Biden administration’s White House Twitter account opted to delete a misleading tweet after it was hit with an embarrassing “context-check” on the platform, which is now under new ownership by billionaire tech mogul Elon Musk.

The White House had tweeted out a celebratory message on Wednesday, congratulating U.S. President Joe Biden for overseeing “the biggest increase” in American seniors’ social security checks in a decade.

However, the tweet was quickly taken down after a “context-check” noted that the increase was actually due to an automatic adjustment triggered by skyrocketing inflation that has reached its highest point in four decades under the Biden administration.

According to a description provided under the context message, “Context is written by people who use Twitter, and appears when rated helpful by others.”

White House: seniors are getting the biggest SS increase in 10 years.

Context-checkers: That’s because inflation is the highest it’s been in decades.

SpaceX founder and Tesla CEO Elon Musk, who closed his $44 billion deal to purchase Twitter on Thursday, responded to the news by remarking: “The system is working.”

Many Twitter users interpreted the context correction of the White House’s statement as evidence that the Big Tech platform, widely criticized under its previous ownership for censoring and fact-checking conservative voices, is undergoing a significant facelift thanks to its new leadership.

“The White House has officially DELETED this tweet after getting absolutely humiliated by reality check,” reacted commentator Benny Johnson. “GET REKT.”

The Daily Wire’s official account posted an “update” to an earlier message about the White House’s fact-checked statement, remarking, “Love the new Twitter” after pointing out that the White House has scrubbed the misleading tweet.

White House spokeswoman Karine Jean-Pierre sought to save face when questioned about the tweet during a Wednesday press conference, quickly deflecting to direct ire toward Republicans.

“The tweet was not complete. Usually when we put out a tweet, we post it with context and it did not have that context,” Jean-Pierre said, explaining that the tweet should have stated that seniors would simultaneously see their Medicare premiums decrease in addition to receiving larger Social Security payouts.

She then pivoted to attacking so-called “MAGA Republicans in Congress,” who she said threaten Americans’ Social Security and Medicare.

“The tweet was not complete—Usually when we put out a tweet, we post it with context. […] Let’s not forget […] about MAGA Republicans in Congress & their continued threat.” pic.twitter.com/VzOCWCxh4y

However, even the simultaneous drop in Medicare premiums cited by Jean-Pierre has been subjected to scrutiny by fact-checkers.

In late September, FactCheck.org reported that while Biden was technically correct in remarking that Medicare premiums will go down this year for the first time in a decade, he failed to mention that the drop comes on the heels of “a large increase the prior year, partly due to anticipated Alzheimer’s drug expenses, which didn’t actually materialize.”

The Biden administration has a long history of making claims about its supposed wins without providing relevant context.

The historically unpopular president has boasted about massive job growth under his leadership while failing to mention that many of the job gains come as Americans gradually re-enter the workforce after crippling COVID-19 lockdowns that artificially put an unprecedented number of people out of work during the height of the pandemic response.

Over the summer, the White House continued to insist that the U.S. was “stronger economically than we have been in history,” despite the fact that the economy had been mired in the textbook definition of a recession after experiencing two consecutive quarters of negative growth.

Under the Biden administration, inflation reached its highest point in 40 years in June, according to Politico.