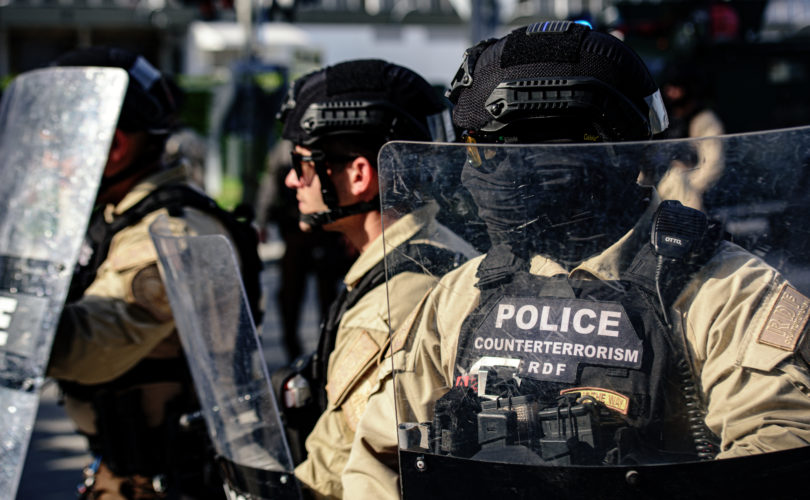 The database is owned and operated by the Global Internet Forum to Counter Terrorism (GIFCT), an international organization created in 2017 by Twitter, YouTube, Microsoft, and Facebook after the Islamic terror attacks in Paris and Brussels.

Reuters says the database, used by 14 Big Tech corporations including Reddit, Instagram, and Verizon, is now set to crack down on “far-right” groups, “including the Proud Boys, the Three Percenters and neo-Nazis.”

But the GIFCT’s focus is not isolated to a few fringe organizations.

A June 22 report published by the research arm of the organization positions Trump-supporters and “MAGA actors” alongside fringe right-wing militia groups, and identifies those opposed to COVID-19 lockdowns and mandatory masking as members of “extremist movements.”

The report goes on to describe anyone who believes the unprecedented COVID-19 restrictions are “evidence of a deep state (or big government) conspiracy encroaching on individual freedom” as a conspiracy theorist contributing to a network of violent extremism and domestic terrorism.

Human Events senior editor Jack Posobiec remarked in a July 26 tweet that “Republicans have done nothing to prevent this from coming,” accusing the GOP of having been “bought off by Big Tech.”

Republicans have done nothing to prevent this from coming.They’re bought off by big tech.

Are you paying attention yet? pic.twitter.com/OYwAzY92Bt

As reported by Reuters, the shared GIFCT database currently stores “digital fingerprints of videos and images related to groups on the U.N. Security Council’s consolidated sanctions list” and has focused primarily on radical Islamic terror groups such as Isis, the Taliban, and al Queda until now.

But GIFCT executive director Nicholas Rasmussen told Reuters that “[a]nyone looking at the terrorism or extremism landscape has to appreciate that there are other parts … that are demanding attention right now,” referring to what Reuters called “the threats of far-right or racially motivated violent extremism.”

According to Reuters, ‘The issue of domestic extremism, including white supremacy and militia groups, took on renewed urgency following the deadly Jan. 6 riot at the U.S. Capitol.”

News of the expansion of the counterterrorism database comes on the heels of a joint announcement by the Anti-Defamation League (ADL) and online payment company PayPal about a new research venture for “combatting racism, hate and extremism.”

Manhattan District Attorney Cy Vance Jr. said, “I applaud PayPal and the ADL for joining forces to combat hate and extremist movements who seek to utilize financial platforms to bankroll their criminal activities and profit from the spread of racism and bigotry.”

The ADL has targeted groups who recognize the Marxist roots and aims of Black Lives Matter, those who encourage disobeying draconian COVID-19 restrictions on personal liberty, and individuals distrustful of George Soros, the prominent funder of left-wing activist groups, as  “hateful” and “conspiratorial.”

According to USAToday, PayPal and the ADL will share the results of their research with policymakers, the financial industry, and law enforcement.

Can you believe China implemented and enforces a “social credit score”? How dystopian! Thank goodness we live in the good old U. S. of A., where that sort of th— https://t.co/Es8FbGkVEh

News of the ADL’s collaboration with PayPal and Big Tech’s crackdown on putative “extremist” content are among the latest in a series of salvoes from both private companies and the federal government targeting alleged domestic terrorism threats following the events of January 6.

The White House has flagged domestic terrorism from “white supremacists” as an urgent threat in the United States, and the Federal Bureau of Investigation (FBI) this month encouraged Americans to identify “extremism” in family members and peers and to report their loved ones to the FBI.

According to an unclassified report from the Office of National Intelligence published in March, “[n]arratives of fraud in the recent general election, the emboldening impact of the violent breach of the US Capitol, conditions related to the COVID-19 pandemic, and conspiracy theories promoting violence will almost certainly spur some DVEs [domestic violent extremists] to try to engage in violence this year.”

In June, The Washington Post reported that Facebook would ban or delete the accounts of anyone charged (though not necessarily convicted) of involvement in the January 6 riot.

Meanwhile, a Politico report earlier this month hinted that the Biden administration, along with the Democratic National Committee (DNC), might “work with SMS carriers to dispel misinformation about [COVID-19] vaccines that is sent over social media and text messages.”

Earlier this month, White House Press Secretary Jen Psaki indicated the federal government was feeding social media companies information about which content to flag, and suggested tech companies ought to collude with one another to ensure that users banned from one platform be banned from others as well.

Psaki doubles down on calls for censorship of “disinformation:”

Psaki appeared to suggest the Biden administration was working to help social media platforms to “create robust enforcement strategies that bridge their properties and provide transparency about rules,” and added  “you shouldn’t be banned from one platform and not others.”

Psaki’s comments sparked a massive backlash for appearing to acknowledge that the federal government is working with social media corporations to censor content it considers “misinformation,” and encourage platforms to share a database of users who ought to be banned.

The White House explicitly demands total collusion from Big Tech billionaires to censor what the American people can & cannot say.

In an op-ed in The Wall Street Journal announcing his lawsuit, Trump said “[o]ne of the gravest threats to our democracy today is a powerful group of Big Tech corporations that have teamed up with government to censor the free speech of the American people.”

“This is not only wrong,” Trump said, “it is unconstitutional. To restore free speech for myself and for every American, I am suing Big Tech to stop it.”