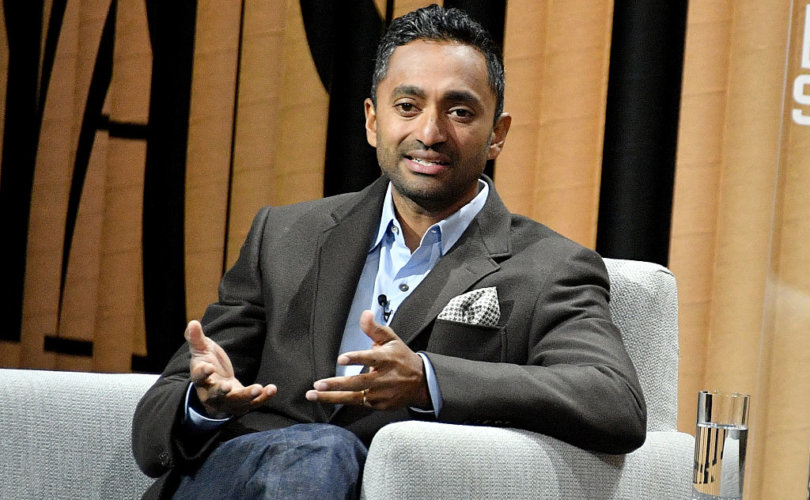 (LifeSiteNews) — Billionaire venture capitalist Chamath Palihapitiya, who has donated hundreds of thousands of dollars to Democrat political funds and is part-owner of an NBA team, drew massive criticism over the weekend after he said “nobody cares” about the plight of Muslim Uyghurs who have been placed in concentration camps, raped, and forcibly sterilized under the Chinese Communist regime.

Though the billionaire donor has attempted to back away from the comments after facing considerable backlash, critics argue his “clarifying comments” aren’t enough.

“Nobody cares about what’s happening to the Uyghurs,” said Palihapitiya during a Saturday episode of his podcast All-In. “You bring it up because you really care, and I think that’s nice that you care, the rest of us don’t care. I’m telling you a very hard, ugly truth, okay? Of all the things that I care about, yes, it is below my line.”

Michael Sobolik, a fellow in Indo-Pacific studies with the American Foreign Policy Council, a Washington, D.C.-based think tank, highlighted Palihapitiya’s comments in a January 17 tweet, noting that “[t]he conversation goes downhill from there.”

Owner of the @warriors🏀 says he doesn’t care about the Uyghurs.

The conversation goes downhill from there.@chamath…

– questions whether a genocide is actually happening
– says the CCP isn’t a dictatorship
– says the US is no better than the CCP pic.twitter.com/qAwi7hUPvo

During the podcast Palihapitiya suggested that it “may not be true” that the Uyghurs, who reports indicate have been systematically raped, forcibly sterilized, and imprisoned in camps where they were subjected to re-education at the hands of the Chinese Communist Party (CCP), have actually been subjected to such treatment.

The comment has raised eyebrows for mirroring the Chinese government’s own assertions that claims of torture and genocide are “lies and absurd allegations.”

The Washington Free Beacon pointed out that Palihapitiya further mouthed CCP talking points by saying “he’s ‘not sure’” if China is really a “‘brutal dictatorship,’ and that the United States is not in a position to lecture China on human rights issues.”

The billionaire’s comments drew swift backlash from both sides of the political aisle, with his remarks considered particularly egregious due to his corporate and political connections.

Meanwhile, according to the report, Palihapitiya has shelled out $750,000 to Senate Majority Leader Chuck Schumer’s political action committee, spent tens of thousands of dollars backing the Democratic National Committee (DNC) and former presidential candidate Hillary Clinton, and in 2020 donated a quarter of a million dollars to Joe Biden’s Victory Fund.

Palihapitiya is also a part-owner of the National Basketball Association’s Golden State Warriors, a troubling connection since the NBA has long drawn controversy for its failure to speak out on the CCP’s human rights violations against the Uyghurs and Hong Kong freedom fighters while bringing in massive revenue from China.

“We’ve always known that the @NBA & many of its owners are happy to put profits over people. Now @chamath is saying it plain as day: he doesn’t care that Communist China is committing genocide against the Uyghurs. He doesn’t care that millions are sent to forced labor camps,” said Florida Republican Sen. Rick Scott in a Monday tweet. “Communist China is imprisoning innocent people simply due to their Muslim faith & silence is appeasement.”

We’ve always known that the @NBA & many of its owners are happy to put profits over people. Now @chamath is saying it plain as day: he doesn’t care that Communist China is committing genocide against the Uyghurs. He doesn’t care that millions are sent to forced labor camps. (1/2) https://t.co/GsvSTrD2Uo

Both the Biden White House and the Warriors also distanced themselves from Palihapitiya following the remarks, the Beacon reported.

“In re-listening to this week’s podcast, I recognize that I come across as lacking empathy,” Palihapitiya said in a January 18 tweet. “I acknowledge that entirely. As a refugee, my family fled a country with its own set of human rights issues so this is something that is very much a part of my lived experience. To be clear, my belief is that human rights matter, whether in China, the United States, or elsewhere. Full stop.”

The response was immediately slammed as a non-apology, with Bitcoin investor Peter McCormack remarking, “You forgot to mention ‘Uighurs’ and ‘Genocide’ in your statement.”

Sobolik also responded to the “clarifying comments” by first observing that “[i]t takes a lot of maturity to respond to public rebuke with thought and reflection. Props to @chamath for listening.”

Still, Sobolik hit out at the Democrat megadonor for failing to “mention the Uyghurs by name” and “still drawing a moral equivalence between the US and the CCP.”

1) It takes a lot of maturity to respond to public rebuke with thought and reflection. Props to @chamath for listening.

2) It’s telling he doesn’t mention the Uyghurs by name.

3) He’s still drawing a moral equivalence between the US and the CCP. https://t.co/ZBW9LqSEP4

Ironically, Palihapitiya could be correct in observing that the U.S. lacks the moral high ground to criticize the CCP for its human rights abuses — though perhaps not for the reasons he may assert.

While the CCP’s one-child policy has been responsible for widescale infanticide and its treatment of the ethnic Uyghurs has been regarded as genocide, the U.S. is one of only seven countries including China and North Korea which permit elective abortions after 20 weeks gestation.

Gravely, more than 62 million abortions are estimated to have been committed in the U.S. since the Supreme Court found a “constitutional right” to abortion in its landmark Roe v. Wade decision in 1973, with an estimated one million unborn babies killed every single year in America from 1973 to 2012.

Many pro-life advocates are hopeful that the U.S. Supreme Court could help the nation reclaim some of its moral integrity by overturning Roe v. Wade, which has become a distinct possibility since the Court agreed to hear Dobbs v. Jackson Women’s Health last year. Since the case in Dobbs hinges upon whether individual states have the right to limit abortions, a decision favorable to the pro-life side could result in many states pursuing abortion bans, potentially saving millions of unborn lives.