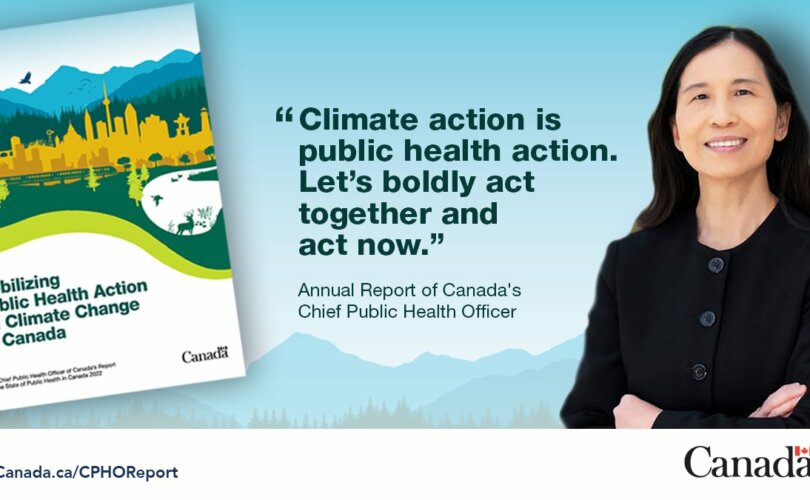 Dr. Theresa Tam, the Chief Public Health Officer of Canada, tweeted Tuesday, “Today, I released the #CPHOReport2022. It’s about climate change, and the multiple and cascading ways it impacts our health.”

1/5 Why health needs to be at the heart of #ClimateAction.

Today, I released the #CPHOReport2022. It’s about climate change, and the multiple and cascading ways it impacts our health. #DYK public health can help prevent and reduce these impacts? pic.twitter.com/vrL8L9DmR6

The report begins with a quote from Tam stating that “we must build on these strengths to better prepare for and respond to what the World Health Organization [WHO] calls the greatest health threat of our time.”

Tam has close ties with the WHO and has been on an advisory committee for the WHO since 2018.

Without providing a single citation or footnote in the entire document, the report alleges that “Canada is warming at a rate two times faster than the global average, while the north is warming three to four times faster.”

“People and communities can face multiple and cascading threats at the same time. For instance, exposure to extreme weather events can cause physical injuries but can also result in long-term mental health impacts,” the report continued.

In one paragraph it is stated that it is “daunting to think about what climate change has in store for us.” Without referring to any verified research, the report called alleged change to the climate “a crisis that calls out for a public health response” that requires “us to think beyond human health and prioritize the well-being of our environment.”

The statements from public health are in contradiction to what significant research has made clear about the effects of warming – if any is taking place in the manner suggested by the government of Canada.

Contrary to the report’s statement that carbon emissions being the cause of global warming, it has been established that this is not the case.

In an interview with The Epoch Times, geologist Gregory Wrightstone dispelled the myth that carbon is the cause of warming.

Referring to ancient ages in the past, he stated, “They were growing barley in Greenland. You can’t grow that now.”

He said that carbon (co2) is in reality a “hugely beneficial molecule” and that the presence of more co2 has led to better crop yields and a “greening” of the world.

One such benefit of more co2, he said, is that “more co2 means less water is needed for crops.”

He added that historically when a warming period would end, civilizations would basically collapse due to lack of crop yield and a rise in disease. We are in a much better position today with technology to withstand a cooling, but in his opinion, warming is our friend.