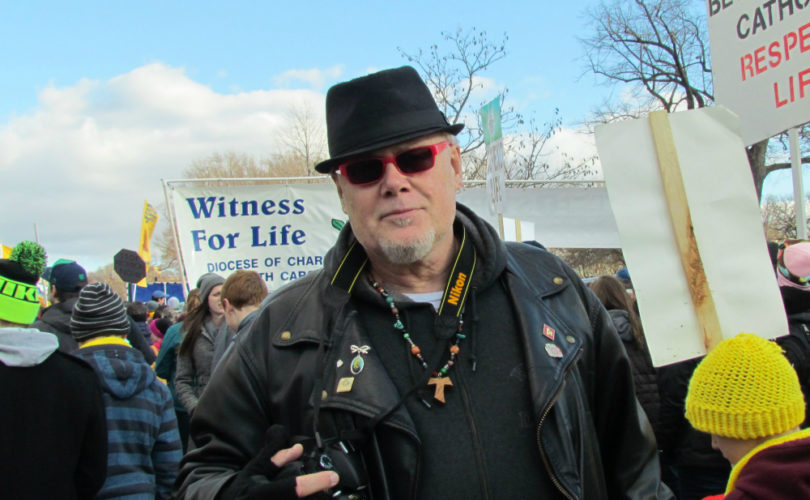 Not many biker clubs can say they were inspired by a nun and exist to stamp out violence – but then Pro Bikers for Life is not any ordinary group of bikers.

“Basically, we ride to save the unborn,” Lou Fielack, a member from New York state, told LifeSiteNews. “We do sidewalk counseling in front of abortion clinics. We get young men and women to turn around and embrace life, and direct them to the Sisters of Life or the nearest crisis pregnancy center.”

The leather-clad contingent stuck out, even among the diversifying March for Life crowd in 2015. But they draw their strength from the same source as many in the pro-life movement.

“We get together and ride. We pray the rosary and try to save babies,” said Rob Westenberger, a motorcycle enthusiast from southern New Jersey.

The members commit to pray the rosary in their homes and go to Eucharistic adoration, either alone or as a team.

“It's a union of many people praying as we counsel” at abortion facilities across the nation, explained Thomas Upshur of New York City, who founded the organization in 2009.

Upshur says that Sister Loretta of the Sisters of Life invited him to go to Washington and asked him an unexpected question. “She said, 'Why don't you start something pro-life for bikers, especially at the clinics, to talk to guys?'” Upshur said. Despite his burly frame and tall stature, he found he could not tell the sister no.

Having bikers peacefully standing outside abortion facilities “makes a big difference” in counselors' ability “to talk to the men,” whether in a sidewalk counseling situation or otherwise. Boyfriends or husbands who might never speak to a woman or an elderly man might find a pro-life biker more approachable.

Upshur remembered bonding with a bus driver in Brooklyn over their common love of motorcycles.

“I looked at the bus driver and said, 'You look like a biker to me.' He said, 'I am a biker. How could you tell?' I said, 'You're the personification of a biker.'”

Thomas told the driver tales of riding on his Roadmaster to see his father in Detroit, who has since passed away. The driver said he had also lost his father in South Carolina the previous year. Then Upshur mentioned his stand for life.

The driver “kinda dropped his head, and he said, 'I'm in a lot of pain.' He said, 'Can I talk to you'?” The driver revealed that he had been part of an abortion 30 years earlier, saying, “I have been in pain everyday since then.”

After praying together, he thanked Upshur and gave himself a bit of biker advice: “You've gotta keep the shiny side up and the rubber to the road.'

“We run into this all the time,” Upshur said.

Outside abortion facilities, too, men gravitate toward masculine men.

“We tell them to step up to the plate and protect their child,” Upshur said. “And many guys will get up, go into the clinic,” and walk back out after convincing their girlfriends not to go through with the abortion – often a procedure the men talked the women into in the first place.

One of their members let slip the bikers' secret: Their hard exteriors contain tender hearts. “You have to be in prayer to do this work,” Fielack told LifeSiteNews. “And no matter what they throw at you, you have to accept the cursing, spitting – whatever they might say and do. If you're going to be a member, you have to be able to renounce violence.”

Young people also responded – more than 150,000 of them at the 2013 World Youth Day in Rio de Janeiro, where the bikers had a table, according to Upshur.

Africans in particular, were appalled to learn of the number of abortions in the United States. “I thought America was civilized,” they told Upshur. “How can it be civilized when they're aborting so many of their babies, and especially in the black community?”

The bikers are also committed to protecting the safety of other pro-lifers, escorting Life Runners through the streets of New York City during a run.

The group has dozens of members in states as far removed as Alabama, Florida, Illinois, Kansas, Maine, and New York. And they continue to spread the world through their website, ProBikersForLife.us, and Facebook page – recruiting more bikers to pray for one another and counsel together when they have the opportunity.

“There's no one person” who embodies the group, Upshur said. “It's a team effort.”

Biking for Babies: Bikers ride from New Orleans to Chicago on a pro-life mission
‘Moms’ Night Out’ brings chaos, church, and biker gangs together in family-friendly flick