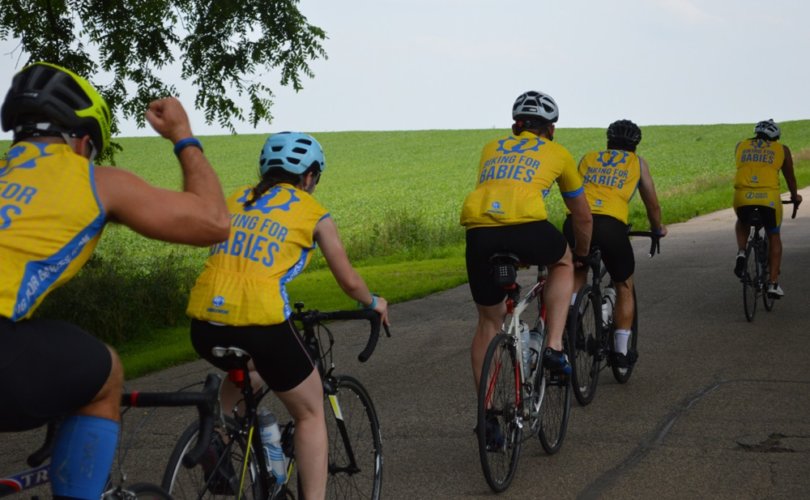 July 26, 2019 (LifeSiteNews) — A 10-year-old grassroots pro-life outreach that has young adults biking cross-country has given more than half a million dollars to support pregnancy resource centers and continues to grow.

Biking for Babies recently completed its 2019 ride, during which more than 30 college students and young adults cycled a combined 2,500 miles over four routes across the U.S. for the babies, women, and families served by pregnancy resource centers.

“At Biking for Babies, we envision a society that embraces the immeasurable worth of every human life from conception to natural death,” said Executive Director Nikki Biese. “In order to obtain that vision, Biking for Babies is mobilizing a generation that will change the course of the pro-life movement and is going to change the world.”

Over the 10 years of its existence, Biking for Babies has raised over $550,000 for pregnancy resource centers, Biese told LifeSiteNews.

The first year, when the two founding young men biked, they raised $14,000, and last year, the group raised $82,010 for pregnancy resource centers.

“This is more than just a bike ride,” Biese said in a blog post just prior to this year’s ride. “It is a pilgrimage of faith, love and hope.”

The group’s fundraising goal for this year is $150,000, said Biese, “and although we have had incredible support so far, we pray the final two months of our fiscal year (ending September 30) will be met with continued generosity.” The group will make a formal announcement in October of the year’s fundraising, she said.

The young athletes with Biking for Babies cycle through the nation each summer, raising awareness and funds for the pregnancy centers across the U.S. that help women in crisis pregnancies.

The group’s mission is “to renew the Culture of Life, one pedal stroke and one pregnancy resource center at time, by increasing Pregnancy Resource Center awareness, raising financial and spiritual support, and forming pro-life missionaries.”

Riders, or missionaries, apply months in advance. Upon acceptance, they embark on a seven-month period of formation that is both physical and spiritual and centers on the national ride in July.

They are asked to develop and articulate their pro-life testimony based upon three things: what they are doing, why they are doing it, and for whom they will do it. Missionaries have the goal of deepening their personal relationship with Christ and experiencing ongoing spiritual growth.

The national ride is meant to display sacrifice, perseverance, and hope via the missionaries, and for them to give pro-life witness along the way, while also bringing others closer to Christ.

They ride an average of 120 miles per day at 15–20 mph, praying throughout their cycling day and presenting on the Biking for Babies mission at various locales on their route.

“Our missionaries are willing to lay down their lives for the most vulnerable among us and for those they will most likely never meet,” Biese said. “These young adults are inspiring and show the world the joy that comes when you sacrifice for the sake of others.”

At the end of the national ride each year, missionaries, their families, other supporters, and community members travel to a central location to participate in the Celebration of Life, which commemorates the mission and ride with fellowship, food, music, and speakers.

At the time, the two young men were students at the University of Illinois-Champaign and were looking to find a tangible way to put their pro-life beliefs into action, she said.

“This was, in part, a response to Saint John Paul II’s exhortation to the United States,” Biese told LifeSiteNews, quoting the late pontiff: “Woe to you if you do not succeed in defending life.”

They biked across the state of Illinois that first year.

Since then, more than 70 young adults have evangelized for life by taking part in the national ride.

Many have integrated their pro-life values into their careers, including becoming pregnancy resource center staff and board members, full-time Christian missionaries, and also seminarians and priests.

They have supported some 64 pregnancy resource centers financially, helping to provide expectant mothers with counseling, ultrasounds, and material support.

Biking for Babies estimates, based upon roughly $500 in resources used to invite a pregnant mom to choose life, that 1,000 lives, maybe more, have been saved through the pro-life outreach.

The group continues to grow, and it is working to formalize its non-profit with infrastructure, staff, and technology.

Part of that has involved Biese leaving her career as an executive for Target to lead Biking for Babies. She shared her testimony, explaining her decision to leave corporate America and take the helm of the organization and how her own family had been blessed by both the services and support of a pregnancy resource center and also Biking for Babies.

“Biking for Babies is not just a summer ride,” she said, “but exists to provide the support these centers need to lift up women and their babies.”