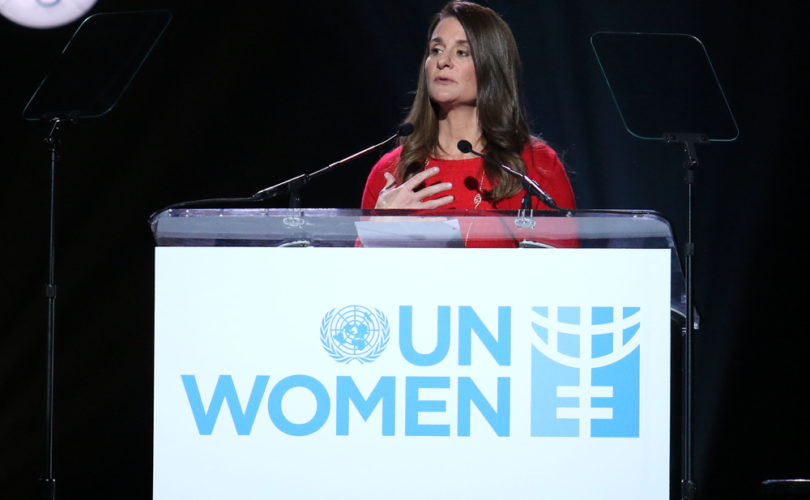 February 17, 2017 (LifeSiteNews) – Bill and Melinda Gates believe that President Donald Trump’s reinstatement of the Mexico City Policy could endanger the lives of millions of women and their babies and create a void that even their “family planning” foundation cannot fill.

Because Trump’s version of the ban on funding to foreign pro-abortion groups is expands upon previous verious of the policy to include “health assistance” programs – and not just USAID programs – it will put the kibosh on promotion of contraception, sterilization and abortion being coupled with authentic aid to the poor.

The likelihood that this would significantly curb the Gateses’ reach in disseminating birth control in developing nations worldwide prompted them to sound the alarm in the Guardian this week.

“We’re concerned that this shift could impact millions of women and girls around the world,” Melinda Gates stated. “It’s likely to have a negative effect on a broad range of health programs that provide lifesaving treatment and prevention options to those most in need.”

The U.S. taxpayer is the largest funding source of contraception worldwide via U.S. foreign aid programs. Bill Gates lamented the loss of American tax dollars for contraception programming, saying his foundation couldn’t make up for the loss.

“The U.S. is the No. 1 donor in the work that we do,” he told the Guardian. “Government aid can’t be replaced by philanthropy.”

“When government leaves an area like that, it can’t be offset. There isn’t a real alternative,” Bill Gates continued. “This expansion of this policy, depending on how it’s implemented, could create a void that even a foundation like ours can’t fill.”

The Mexico City Policy, referred to pejoratively in the media as the “global gag rule,” has been enacted by every Republican president since Ronald Reagan and subsequently overturned by every Democrat.

Aside from banning funding for the typical international abortion groups like the International Planned Parenthood Federation (IPPF) and Marie Stopes International, the expanded version signed by Trump on his first day in office might also allow defunding for the United Nations Population Fund (UNFPA).

And because the expansion now also includes all international “health assistance” programs, it will prevent such assistance from being held over countries’ heads to accept authentic aid, such as authentic healthcare or help with things like mosquito nets to combat malaria or access to water.

Melinda Gates cited health programs such as HIV prevention, TB and malaria, but she also associated birth control with healthcare that she believes is necessary to save lives.

“Enabling women to time and space their pregnancies and providing access to treatment and prevention of infectious diseases is lifesaving work,” she said. “It saves moms’ lives and it saves babies’ lives, and that has long had wide support in the United States.”

Bill and Melinda Gates have long championed contraception as the savior of impoverished people, lobbying and dumping millions of foundation dollars into contraception programs in developing nations over the years.

In spite of claims it does not support abortion, the Gates Foundation has funded various abortion organizations, including varied Planned Parenthood affiliates worldwide and Marie Stopes International. It has had a close partnership with the United Nations Population Fund (UNPFA), which has provided support for China’s one-child policy.

The Gateses spoke with the Guardian in conjunction with the release of their annual letter to billionaire Warren Buffett. In it, they report on the progress of their foundation since Buffett’s 2006 investment of 10 millions shares of his Berkshire Hathaway company in annual installments totaling $31 million at the time.

The push for contraception and “family planning” represents a shift in focus toward social change for the Gates Foundation, according to the Guardian report.

The couple makes statements throughout the letter to Buffett that outright demonstrate their commitment to pushing contraception in poor countries.

Melinda Gates said that if parents have the power to time and space pregnancies, they choose to have fewer children. Bill Gates stated that contraception is how families and countries get out of poverty.

“This link between saving lives, a lower birthrate, and ending poverty was the most important early lesson Melinda and I learned about global health,” he said.

He also said that “like vaccines, contraceptives are one of the greatest lifesaving innovations in history.”

“Contraceptives are also one of the greatest anti-poverty innovations in history,” Melinda Gates stated in the letter. “When women are able to time and space their pregnancies, they are more likely to advance their education and earn an income, and they’re more likely to have healthy children.”

“No country in the last 50 years has emerged from poverty without expanding access to contraceptives,” she said as well.

“Family Planning 2020, a global partnership that we’re a part of, has set a goal of providing 120 million more women access to contraceptives by 2020,” Melinda said. “We’re focusing on South Asia, where contraceptives are used by only a third of the women, and on Africa — where they’re used by fewer than one in five.”

Bill Gates said the birth control initiative was halfway to its deadline but only a quarter of the way to the goal, stating “We need to speed up.”

Despite Melinda Gates’ contention that promoting contraception overseas to people in poverty enjoyed widespread support in the U.S., a Marist Poll released January 23 showed that 83 percent of Americans “support policies like the Mexico City Policy.

That includes 73 percent of respondents who identify as ‘pro-choice,’” according to a statement from the United States Conference of Catholic Bishops (USCCB).

Population Research International president Steve Mosher said that if the expanded Mexico City Policy signed by Trump is implemented properly, it will save more lives than past Mexico City policies. That's because the expanded version applies to “global health assistance furnished by all departments or agencies,” not just USAID family planning programs, and covers “involuntary sterilizations” in addition to abortion.