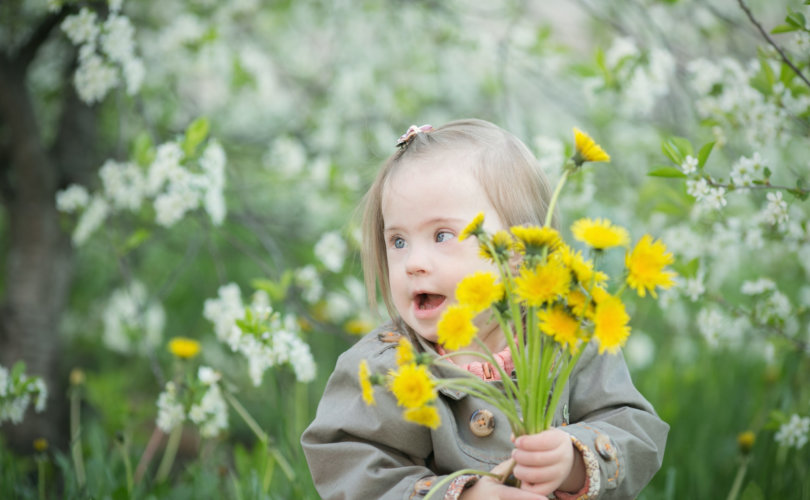 House Bill 205, dubbed the Down syndrome Nondiscrimination Abortion Act, passed the state House February 5 by an overwhelming margin (54-17).  The bill prohibits abortionists from intentionally performing an abortion due to Down syndrome. It also specifies, among other things, that doctors must provide information to women carrying a child diagnosed with Down syndrome.

“They must be protected,” bill sponsor Rep. Karianne Lisonbee (R) told reporters during a news conference at the Utah Capitol last week. “Utah’s message to the world (is) that we will not tolerate discrimination,” she said, adding that abortion is a “terrible form of discrimination.”

The Utah Down Syndrome Foundation’s Amber Merkley, a mom with a Downs child, said many mothers get coerced into an abortion they don’t want by doctors and nurses.

“Fear is the enemy of joy, and we feel a lot of these decisions are made from a place of fear,” she told the local Fox News affiliate.

“The pressure from the medical community — as well as society in general — to abort a child with a prenatal diagnosis can be intense,” a Live Action News report noted.  “Around the world, there is pressure to abort children with disabilities.”

The anti-discrimination measure is in its final stretch before the entire Senate, where Sen. Curt Bramble (R) champions the life-saving legislation, but the fight is going to be tough.  It’s high drama for pro-lifers, as the current Senate session ends Thursday at midnight.

Lisonbee said a driving force behind the bill was a report last year that almost 100 percent of Icelandic women aborted their children diagnosed with Down syndrome.

“Looking at history, I have to ask, if we don’t take a stand from the start against the selective purging of one portion of our society, will we continue our silence when the next undesirable segment is purged, and the next?” the pro-life Republican said.

Abortionists who violate the law and are prosecuted can be convicted of a class A misdemeanor, which carries possible fines of up to $2500 and a possible jail term of up to one year.

Opponents of the bill say it will only invite lawsuits.  The Utah branch of the American Civil Liberties Union (ACLU) repeated its Ohio comrades' claim that an abortion ban protecting Down syndrome pre-born children is a “calculated and unconstitutional attack designed to burden women, scare doctors, and chip away at Roe v. Wade.”

Opponents further cite the high cost of defending the bill in court.  And some claim it will “chill” abortionist-client business relationships.

Sutherland Institute Director William Duncan argued HB-205 is written specifically enough to pass the constitutionality test.  “The Legislature can’t allow advocacy groups to have a heckler’s veto over what the state law is by saying, ‘Well, if you pass that law, we’ll sue,’” the conservative think tank attorney said.

The Utah legislature “knows how to do the right thing, and can do that without worrying how others will respond,” Duncan advised skeptics.  “And this is the right thing to do.”

Utah government vital records indicate at least forty pre-born children were killed in 2015 alone because of a prenatal diagnosis of some sort of malady such as Down syndrome.  Utah committed a total of 3,000 abortions that year.

Ob-Gyn Dr. Chris Hutchison, chairman of the Utah College of Obstetricians and Gynecologists, criticized the bill for vagueness and for a lack of enforceability.  “We’re not the mind police,” he said. “How do you know (why) people are choosing?”

Bill supporter Sen. Daniel Thatcher (R) surprisingly countered Hutchison with a total concession. “‘How would we know if that’s why a parent is choosing an abortion?’” he repeated. “The fact is we don’t know, we wouldn’t know, there’s no way this [bill] could be realistically enforced.”