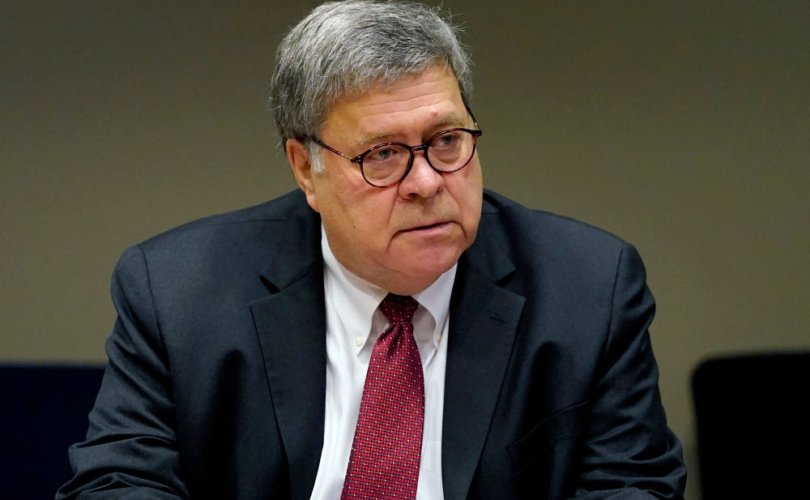 In a September 7 interview with Fox News, Barr, who served as attorney general during the Trump administration, said investigators with the Biden DOJ are “getting very close” to determining whether they can make a “technical” case against Trump regarding his alleged mishandling of classified documents.

“Will the people really understand that this is not failing to return a library book, that this is serious? And so you have to worry about those things,” he said.

Regardless, Barr expressed hope that the DOJ will not ultimately decide to levy charges against Trump, though he said it will face pressure to pursue an indictment.

The former attorney general’s comments come as the Biden administration reportedly mulls criminal charges against Trump over his handling of classified materials. Early last month, the FBI executed an unprecedented raid on the former president’s Mar-a-Lago home in Palm Beach, Florida, during which they seized 11 boxes of documents and other items.

According to the unsealed federal search warrant, Trump is under investigation for alleged violations of the Espionage Act and obstruction of justice.

Many left-wing media outlets have also argued that Trump violated the Presidential Records Act (PRA) by keeping classified government documents in his personal residence. However, the PRA does not carry criminal penalties, and Trump has stated that he had already declassified the papers.

In comments to the Daily Wire late last month, former Trump official Kash Patel backed up Trump’s assertion that the documents had already been declassified, adding that they were related to the baseless years-long “Russiagate” allegation perpetrated by legacy media outlets and Democrats.

Patel said that amid the ongoing federal investigation, the “Russiagate” documents will now not be released until Republicans retake power in the 2022 midterms.

In his September 7 comments to Fox, Barr said “there is no scenario” under which the documents seized in the raid should be returned to Trump.

“If it deals with government stuff, it goes back to the government,” he said.

As the federal investigation of Trump wears on, the former president last week scored a legal victory when a Florida-based federal judge granted his request for a special master to oversee review of the seized documents.

Barr condemned the decision in a separate interview September 6.

“The opinion was wrong, and I think the government should appeal it,” Barr said. “It’s deeply flawed in a number of ways. I don’t think the appointment of a special master is going to hold up, but even if it does, I don’t see it fundamentally changing the trajectory” of the investigation.

As with former Vice President Mike Pence, many Trump voters soured on Barr when he decided to undercut Trump’s allegations of widespread voter fraud in the 2020 presidential election. The former attorney general later said he wouldn’t back Trump if he ran for president again in 2024.

Meanwhile, conservatives have warned that the unprecedented raid on Mar-a-Lago and ongoing federal investigation signal a marked departure from business-as-usual politics.

President Joe Biden’s aggressive speech last week, in which he demonized “MAGA Republicans” as “threats” to democracy against an ominous blood-red backdrop flanked by two U.S. Marines, has ratcheted up concerns about the increasingly militaristic posture of the Biden administration with regard to conservative Christian Americans.