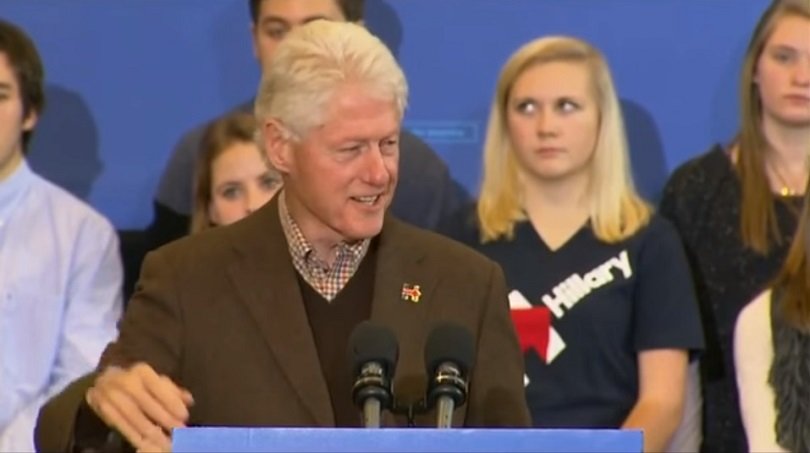 January 4, 2016 (LifeSiteNews) – Bill Clinton gave a crowd in New Hampshire this morning another reason to get out and vote: the winner of the 2016 election may have the opportunity to transform the Supreme Court, he said.

Speaking at a campaign rally for his wife, the 42nd president of the United States said the High Court may be in play in the next four years.

“We need to recognize something that has received almost no attention in this election,” Clinton said approximately eight minutes into the 29-minute speech. “In all probability, the next president of the United States will make between one and three appointments to the United States Supreme Court – and I know who I want doing that.”

Four Supreme Court justices are over the age of 75 — including both the justices he appointed: Ruth Bader Ginsburg and Stephen Breyer, both reliable members of the Court's liberal bloc. Conservative justice Antonin Scalia and swing vote Anthony Kennedy will both turn 80 this year.

The Susan B. Anthony List agreed that the balance of power on the Supreme Court is “one reason electing a pro-life president in 2016 is important.”

Any justice's retirement or death could reshape the Supreme Court, which usually breaks down between evenly divided groups of liberals (Ginsburg, Breyer, Sotomayor, and Kagan) and conservatives (Scalia, Roberts, Thomas, and Alito), with Justice Kennedy often holding final sway – for instance, on the Court's Obergefell v. Hodges decision.

In his speech, the first on behalf of Hillary's primary campaign, Bill Clinton said voters must elect Hillary to continue President Barack Obama's “inclusive social policy” and “stop us from going in reverse.”

While he remains popular in Democratic circles, the former president's return to the campaign stump has not been without controversy. After Hillary Clinton accused Donald Trump of sexism, Trump raised Bill's history of womanizing and Hillary's work to suppress stories ranging from adultery to rape – something Clinton staffers referred to as “bimbo eruptions.”

I hope Bill Clinton starts talking about women's issues so that voters can see what a hypocrite he is and how Hillary abused those women!

He doubled down on the allegation today. On CNN's “New Day” program this morning, Trump said, “I think that Hillary is an enabler.”

“She has one of the great woman abusers of all time waiting for her at the house for dinner,” he said.

Liberal Washington Post columnist Ruth Marcus agreed that President Clinton's history of womanizing – from carrying on an affair in the White House to allegations that he raped Juanita Broaddrick in the late 1970s – was “fair game” if Mrs. Clinton accused other candidates of sexism.

That turn of events pleased talk show host Rush Limbaugh, who said on today's program, “Donald Trump may be a one-man wrecking ball on the entire concept of this War on Women business.”