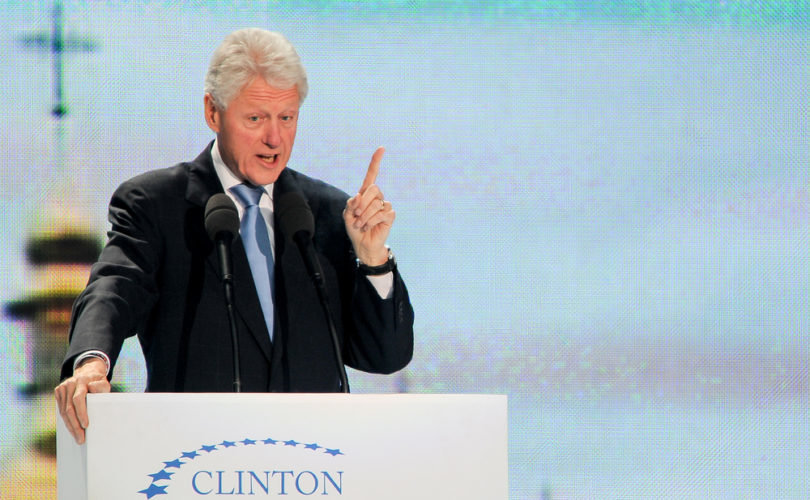 WASHINGTON, D.C., December 2, 2015 (LifeSiteNews) – Late-term abortion bans have found an unlikely supporter: President Bill Clinton. Or, at least, had a supporter, in theory, during the former president's term in office.

The Democrat reportedly expressed his opposition to abortion after the second trimester shortly after his re-election.

Author Taylor Branch reports that Bill Clinton told him, “I believe that if you can’t make up your mind in the first six months, you don’t have the right to have an abortion.” The conversation took place on May 26, 1997.

It came just a year after Clinton vetoed the Partial Birth Abortion ban in April 1996.

Clinton's remarks are getting renewed attention this week after the Washington Free Beacon released audio of Branch recounting what Clinton had told him about abortion during an interview. During Clinton's presidency Branch had frequent interviews with the president, immediately after which he recalled what the president had told him into a tape recorder.

“He said the pro-choice people have essentially allowed their own insensitivity to maneuver them – to push them – into a losing political situation and he said to make a statesman out of Rick Santorum, which he rolled his eyes at,” according to Branch, the author of The Clinton Tapes: Conversations with a President, 1993-2001.

President Clinton said the abortion industry had “framed the question” of late-term abortion “selfishly, by putting it in terms of a woman’s right to do whatever she wanted,” Branch said, essentially framing the bill as a defense of a “selfish woman’s right to crush her baby’s skull.”

Clinton himself reframed the debate in most sympathetic terms in his message vetoing the partial birth abortion ban, saying, “I came to understand that this is a rarely used procedure, justifiable as a last resort when doctors judge it necessary to save a woman's life or to avert serious health consequences to her.”

In early 1997, abortion industry lobbyist Ron Fitzsimmons revealed that he “lied through [his] teeth” when he publicly stated that the procedure was usually performed out of medical necessity.

President Clinton's comments at the time would put him at odds with his wife, Democratic presidential hopeful Hillary Clinton, who has vocally opposed the Pain Capable Unborn Child Protection Act. The bill, which has twice passed the House of Representatives, would restrict abortion to the first 20 weeks of pregnancy.

She told “Face the Nation” in September, “I think that the kind of late-term abortions that take place are because of medical necessity.”

Ultimately, the debate “gets back to whether you respect a woman's right to choose or not. And I think that's what this whole argument, once again, is about.”

The most recent Democratic Party platform supports taxpayer-funded abortion through all nine months of pregnancy.

Polls show that a majority of Americans support the pain capable abortion bill.