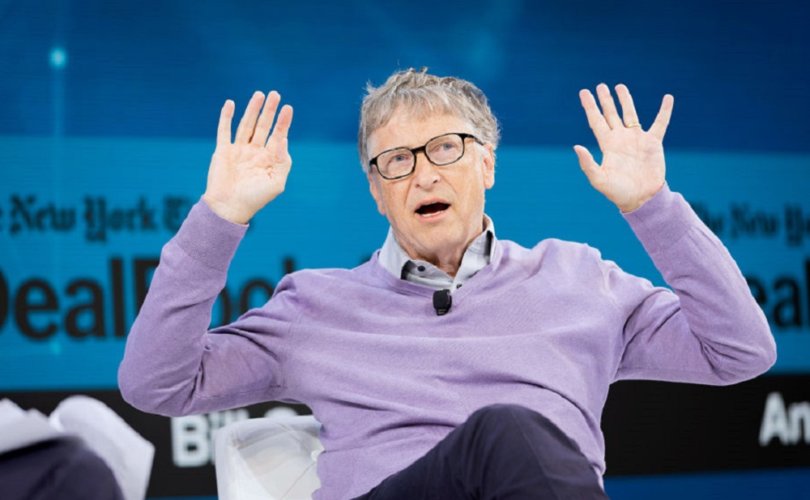 (LifeSiteNews) – Bill Gates just warned that “we could be entering the worst part of the pandemic,” predicting that the spread of COVID-19’s omicron variant “will be the worst surge we have seen so far because it’s so infectious.”

Despite the assertion by the South African doctor who identified the omicron variant that it causes “extremely mild” symptoms, Gates is expressing uncertainty as to how severe the omicron variant is. The reports of mild omicron  symptoms are consistent with the normal development of viruses, known to become less dangerous as they become more transmissible.

“The big unknown is how sick omicron makes you. We need to take it seriously until we know more about it. Even if it’s only half as severe as delta, it will be the worst surge we have seen so far because it’s so infectious,” Gates wrote  on Twitter.

The omicron variant is so infectious, Gates said, that it is “spreading faster than any virus in history,” and “will soon be in every country in the world.” He is depicting the virus as an obstacle to getting “back to normal,” highlighting his own response to the omicron variant.

Gates further insisted that we have to “look out for each other” by “wearing masks, avoiding big indoor gatherings, and getting vaccinated” with a booster shot for the “best protection.”

Gates admitted, however, that “there will be more breakthrough cases in people who are v[axxed],” without citing those who receive booster shots as an exception to this occurrence.

According to Gates, an increased breakthrough of transmission among the vaccinated is “purely a factor of how many people are v[axxed] and how fast this variant is spreading.” Instead of preventing transmission, he insisted that “vaccines are designed to prevent people from getting seriously ill or dying & are doing that well.”

He predicts that omicron waves will last “less than three months” in each country, and that “those few months could be bad,” but declared, “I still believe if we take the right steps, the pandemic can be over in 2022.”

However, while Gates is careful not to make absolute statements, he has moved his proposed goal posts for a return to “normalcy” since the COVID-19 outbreak began. In an April 2020 interview, he suggested that mass vaccination would help usher in a return to normal gatherings, saying that “activities like mass gatherings” “may not come back” until people are “widely vaccinated.”

In December 2020, he predicted Americans might regain a semblance of normalcy around summer 2021 but said “even through early 2022, unless we help other countries get rid of this disease, and we get high vaccination rates in our country, the risk of reintroduction will be there.”

Now that Gates has admitted vaccines do not prevent transmission of COVID-19, the question remains whether Gates still expects the world won’t return to normal until the virus is eradicated. His desire to “get rid of this disease” defies the expectation of most scientists that COVID-19 will become endemic, meaning it will circulate every year, like the common cold.

In January 2021, when Nature “asked more than 100 immunologists, infectious-disease researchers and virologists working on the coronavirus whether it could be eradicated,” almost 90% of the respondents said “the coronavirus will become endemic.”

Gates’ thoughts on COVID-19 and how the world should respond to the virus are very important for world health policy because his Gates Foundation is “by far the largest private contributor to the World Health Organization (WHO), accounting for some 10% of its budget,” SWI reported this year. The WHO is considered by many nations to be the world’s preeminent health authority, and they accordingly follow its health policy guidelines in lockstep.

The Global Alliance for Vaccines and Immunization (known as the GAVI alliance), which works to provide vaccines to developing countries, is also one of the WHO’s largest funders, having contributed $371 million as the fourth largest contributor to its budget in 2018-2019. GAVI itself was launched by the Bill & Melinda Gates Foundation “and a group of founding partners.” The combined WHO funding from the Gates Foundation and GAVI make Bill Gates the “unofficial top sponsor of the WHO,” as Dr. Joseph Mercola has noted.

Lawrence Gostin, faculty director of the O’Neill Institute for National and Global Health Law at Georgetown University in the United States, raised concerns about Gates’ influence over the WHO.

“Most of the funding Gates provides to the WHO is tied to specific agendas of the foundation,” he remarked earlier this year. That means that the WHO cannot itself set global health priorities, and it is beholden to a largely unaccountable private actor. Unlike states, the Gates Foundation has little democratic accountability.”

Gates has long been open about the fact that the promotion of vaccines is one of his main interests, and he has put his money where his mouth is.

In January 2019, Bill Gates said the $10 billion he gave to GAVI, to the Global Fund, and to the Global Polio Eradication Initiative — all of which aim to expand access to vaccines and medicines to people across the globe — were “the best investments” that he and his wife “made in the past 20 years.” That $10 billion is a huge chunk of the almost $50 billion he and his wife have given to “charitable causes” over the course of his life.

Robert F. Kennedy Jr. wrote in his new book “Vax-Unvax” that “Gates’ vaccine obsession has diverted WHO’s giving from poverty alleviation, nutrition, and clean water to make vaccine uptake its preeminent public health metric. And Gates is not afraid to throw his weight around.”

Vaccines themselves are not Gates’ only investment that stands to profit from COVID-19. A December 2019 article in Scientific American reported that research at the Massachusetts Institute of Technology (MIT) for embedding vaccine records “directly into the skin” of children came about because of a direct request from Gates.