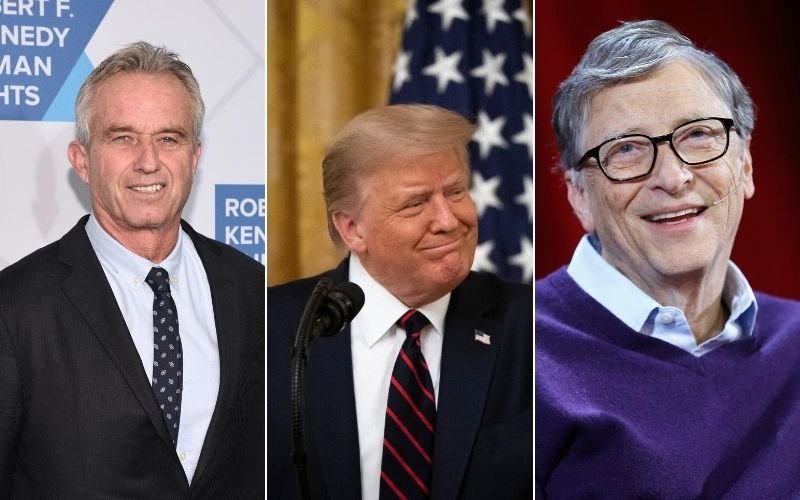 UNITED STATES, August 11, 2020 (LifeSiteNews) – Bill Gates has described President Donald Trump as a vaccine skeptic and said that the president has encouraged him to meet with prominent vaccine critic Robert F. Kennedy, Jr.

In an interview with Wired, Gates said that he hasn’t spoken to Trump directly since March 2018, but claimed he has spoken with both Vice President Mike Pence and Secretary of State Mike Pompeo in an attempt to lobby them to provide U.S. funding “to procure the [coronavirus] vaccine for the developing countries.”

“It’s very important to be able to tell the vaccine companies to build extra factories for the billions of doses,” Gates said.

Gates also said that in previous meetings Trump has encouraged him to meet with Kennedy.

“Every meeting I have with him he is like, ‘Hey, I don’t know about vaccines, and you have to meet with this guy Robert Kennedy Jr. who hates vaccines and spreads crazy stuff about them,’” Gates said.

Trump announced last month that his administration is “all set to march when it comes to the [coronavirus] vaccine,” with a military general overseeing the logistics of delivering the still-in-development product. He has previously stated that a future coronavirus vaccine will be voluntary. In a White House interview given last month Trump said that if he had a choice between vaccines and therapeutics, he would choose therapeutics every time.

Robert F. Kennedy, Jr., nephew of former U.S. president John F. Kennedy and an American environmental attorney and author, has been outspoken in outlining reasons for concern about various vaccine projects, including those that receive funding from Gates. Kennedy has been raising awareness about children injured by vaccines since before the coronavirus outbreak.

In an April 9, 2020 article, Kennedy wrote: “Vaccines, for Bill Gates, are a strategic philanthropy that feed his many vaccine-related businesses (including Microsoft’s ambition to control a global vaccination ID enterprise) and give him dictatorial control of global health policy.”

In the same month Gates told the Financial Times that  “normalcy only returns when we’ve largely vaccinated the entire global population.” During the interview Gates interrupted his own reflections on the wide-ranging impacts of the coronavirus crisis, saying “you don’t have a choice,” although it is unclear exactly what he meant by the comment.

In a recent online debate on mandatory vaccinations Kennedy pointed out that a significant percentage of participants in a recent trial for a leading coronavirus vaccine have been hospitalized.

Kennedy also noted that several of the coronavirus vaccine developers, a number of which have received funding from Gates, have been forced to pay billions of dollars in criminal penalties related to their medical products.

The Wired interview hosts dismiss as “misinformation” by “conspiracy theorists” the idea that Gates is involved with any plans to link coronavirus vaccines with digital identification and microchips proving vaccination status.

He went on to generally describe anti-vaccine criticism as a “kind of titillating, over simplistic explanation of, ‘OK, there’s just an evil person, and that explains all of this.’”

A number of leading global figures, such as former U.K. Prime Minister Tony Blair, have called for the creation of digital IDs to track “disease status” as part of the plans for responding to the coronavirus crisis.

At the conclusion of the interview, Gates said that by the time things had got back to normal that “at least ten years of progress in forcing people to do things in a digital way will have happened in a two year period.”

“But will it be the normal we knew before?” Levy asked.

“Well in the sense that you won’t have to worry about dying of [COVID], yes. In the sense that at least ten years of progress in forcing people to do things in a digital way will have happened in a two year period,” Gates replied. He predicted advances in telemedicine and “e-commerce” and changes in business travel and commercial office space.