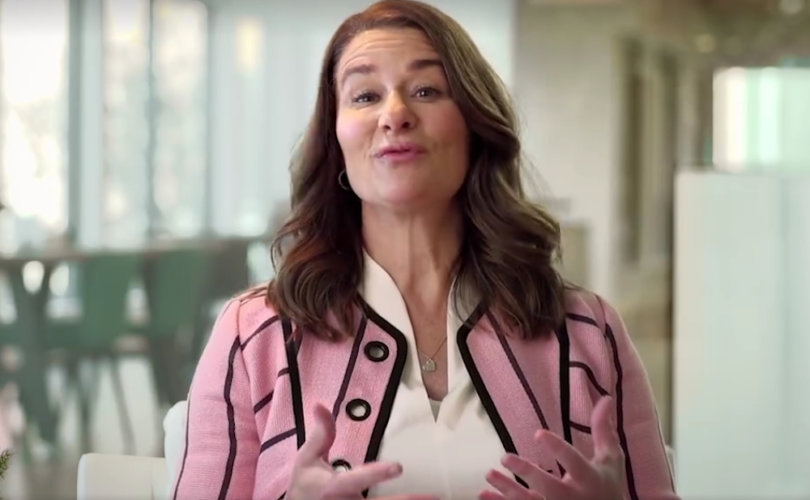 June 24, 2020 (LifeSiteNews) – As work continues on developing a vaccine for COVID-19, left-wing philanthropist Melinda Gates says that “black people” and “indigenous people” in America should be immunized against the virus before whites.

“One of the reasons we are so involved in this is that you don't want the first vaccines to go to the highest-bidding countries,” said Gates, wife of Microsoft co-founder Bill Gates, Fox Business reports. “There are 60 million healthcare workers [around the world]. They deserve to get the vaccine first, they're the ones dealing with this on the front lines, trying to keep us all safe.”

“Then you have to start to tier from there, based on the countries and the populations,” she continued. “Here in the United States, it's going to be black people who really should get it first and many indigenous people, as well as people with underlying symptoms, and then elderly people.”

While many frame a vaccine as a prerequisite for fully reopening society, the prospect of making it mandatory remains controversial for a number of reasons. While mainstream media often fixates on parents who oppose vaccines based on hotly-debated fears over side effects, they tend to overlook another group that supports vaccines in general while having an ethical conflict with vaccines derived from aborted babies’ cells.

The Bill & Melinda Gates Foundation’s role in funding COVID-19 vaccine research has been a point of particular concern, due in large part to the couple’s history as radical advocates for abortion and population control.

“It is important for people to understand why so many are suspicious of the philanthropy of Bill Gates and his ilk, and why so many react with suspicion to the medical opinions of a certain sector of our elites,” LifeSiteNews’ Jonathon Van Maren explains. “It is because they lie to us about abortion, day in and day out, and tell us that destroying a child in the womb is “health care” and “an essential service.” It is because they tell us that the birth control pill has no side effects and is also health care, that the abortion pill is safe, that abortion has no negative impact on women, and hundreds of other lies that we know to be lies.”

During last week’s event, Bill Gates accused the US government of withdrawing from “global problem-solving” and “just trying to cast blame” by withdrawing from the World Health Organization (WHO) over its initial response to the coronavirus outbreak, namely its adoption of Chinese misinformation.

The Trump administration emphatically rejects claims that abandoning the WHO constitutes abandoning the COVID-19 relief effort. “The United States continues to be the undisputed leader in foreign assistance,” James Richardson, director of U.S. Foreign Assistance Resources at the State Department, said last month, noting that the US is currently responsible for “49 percent of all government and multilateral assistance” in response to COVID-19.

As of June 24, the United States is estimated to have seen more than 2.4 million COVID-19 cases, with more than 123,000 deaths and a million recoveries. More than 40 percent of those deaths have come from nursing homes.