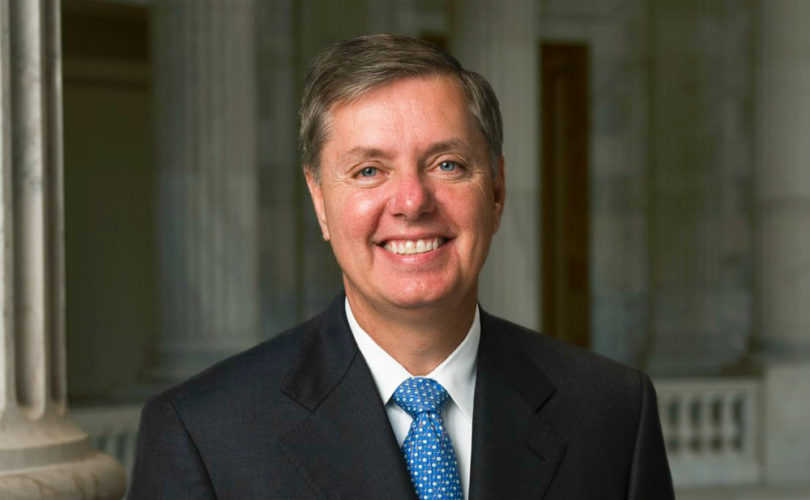 Graham will introduce into the Senate the Pain-Capable Unborn Child Protection Act, which passed the U.S. House yesterday 237-189. If passed, the bill would ban most abortions after 20 weeks, when the pre-born baby can feel pain.

President Trump has promised to sign the legislation if it reaches his desk.

“It’s time for the pro-life majority in the Senate to bring up this bill and force vulnerable pro-abortion Senators up in 2018 to either stand with their pro-life constituents and vote for this bill, or stand with the extreme abortion lobby and vote in favor of late-term abortion-on-demand,” she said.

“This is not a vote that Senator Claire McCaskill or any Senator running in a state carried by President Trump wants to have,” Dannenfelser said.

McCaskill is a pro-abortion Democrat from Missouri, a state that Trump won in 2016 by just over half a million votes.

The bill needs 60 votes to pass the U.S. Senate. There are currently 52 Republican senators.

Although the bill had passed the U.S. House twice before yesterday, it’s never been able to make it through the U.S. Senate.

“We urge the Senate to follow the House's lead and send this bill to President Trump so he can sign this life-affirming legislation into law,” said Tony Perkins, President of the Family Research Council.

The Pain-Capable Unborn Child Protection Act is based on a wealth of mainstream medical evidence that pre-born babies feel excruciating pain as abortionists tear them apart limb by limb.

Critics say one shortcoming of the bill is that it does not protect all pre-born babies 20 weeks and older from abortion. It allows exceptions for babies conceived in rape and incest.

As she argued in favor of protecting pain-capable babies, Rep. Ann Wagner, R-MO, showed her colleagues a large ultrasound image of her granddaughter at 17 weeks old.

The U.S. is currently one of seven countries that allow elective late-term abortions on demand.

A number of Democrats used the word “baby” while arguing on the House floor in favor of late-term abortion.

During Supreme Court Justice Neil Gorsuch's confirmation hearing, Graham explained why he supports the Pain-Capable bill, and that it could end up before the high court, potentially as a challenge to Roe v. Wade.