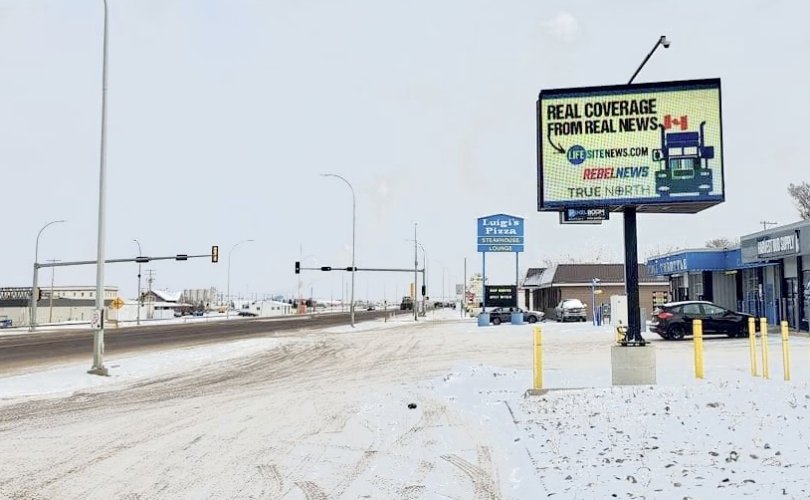 (LifeSiteNews) — LifeSiteNews has designed and erected billboards across southern Alberta to let Canadians know where to find unbiased coverage of the “Freedom Convoy” protest movement.

Amid deceptive coverage and remarks by media and government in regard to the “Freedom Convoy” in Ottawa and the “border blockade” in Coutts, Alberta, LifeSiteNews Marketing Director Rebekah Roberts and Assistant Web Developer Jeremy Williamson designed and coordinated the installation of multiple billboards across southern Alberta telling Canadians which news outlets have been providing honest coverage of the various protests sweeping the nation.

The billboards, which can be found in the areas of Medicine Hat, Lethbridge, Airdrie, and Taber, Alberta, include LifeSiteNews, Rebel News, True North Centre, and the Western Standard, with various slogans indicating that these outlets are providing the stories from the protests that the mainstream media is ignoring.

Included in the slogans are “Real coverage from real news,” “For truth on the border blockade,” and “turn off mainstream news and try real news,” among others.

As the little village of Coutts is thrust into the national spotlight as hundreds of truckers have parked their large vehicles to block access to the town’s U.S. border, and tens of thousands of protesters are expected to rejoin the “Freedom Convoy” protest still underway in Ottawa this weekend, the media and government have continued to malign those in support of the movements as a “small fringe minority” with “unacceptable views.”

Despite the attempted spin by the mainstream, a recent poll by reputable pollster Angus Reid found that over half of Canadians support an end to all so-called COVID mandates, which is the stated goal of the protesters in Ottawa and in other cities and towns across the country.

Since the onset of the protests over a week ago, significant changes have occurred in the Canadian political realm. The western provinces of Saskatchewan and Alberta have both announced they will be axing all public health measures in short order, the province of Quebec announced they are changing course on their plan to tax the unvaccinated, and the federal Conservative Party of Canada ousted their pro-mandate leader just days after the demonstrators arrived in Ottawa.