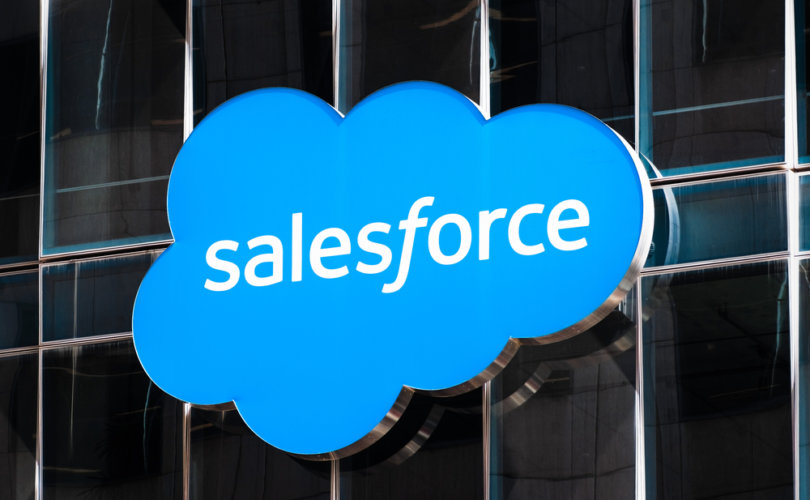 (LifeSiteNews) — Customer-relationship management company Salesforce told thousands of its employees on September 10 that it would help them move out of Texas if they are concerned about the recently enacted pro-life Texas Heartbeat Act.

“These are incredibly personal issues that directly impact many of us — especially women,” a memo to the company’s Slack messaging system said, according to CNBC. “We recognize and respect that we all have deeply held and different perspectives. As a company, we stand with all of our women at Salesforce and everywhere.”

CNBC said there are 2,000 Salesforce employees in Texas out of 56,000 total workers worldwide. It based its numbers on an analysis of LinkedIn data. The company also threatened to pull out of Indiana in 2015 after the passage of a religious freedom law before expanding when then-Gov. Mike Pence watered down the legislation.

“Ohana if you want to move we’ll help you exit TX. Your choice,” CEO Marc Benioff wrote on Twitter.

LifeSiteNews contacted Benioff via email on September 13 but did not receive a response to questions. LifeSite asked the company how many employees it expected to take up the relocation offer, if it would help employees that wanted to relocate to Texas, and what maternity and paternity benefits it offered pregnant women and their spouses.

Texas Right to Life, which helped get the heartbeat bill passed, said Salesforce’s decision is “anti-woman.” It also received a bomb threat on September 10.

“Salesforce’s decision to withdraw from Texas is profoundly anti-woman. Instead of empowering pregnant women who work for Salesforce to choose life, Salesforce is endangering them,” Texas Right to Life communications director Kimberlyn Schwartz told LifeSiteNews via email.

“Ironically, most vocal opponents of the Texas Heartbeat Act are outside of Texas. Texans overwhelmingly support the Texas Heartbeat Act,” Schwartz said. “While Salesforce exploits women and families through a political agenda, Texas Right to Life remains ready and willing to assist all women to choose life, including those who work for Salesforce.”

Turning Point USA CEO Charlie Kirk said Salesforce’ announcement “is just further confirmation that Texas’ heartbeat bill is good and righteous.” He told LifeSite in a text message that conservatives should stop trying to lure “woke corporations” to their states. “Let Silicon Valley boycott red states. Let them pull their companies and their woke employees out of a state like Texas,” the free-market student group executive said.

“In the end, these corporations will blink first when they feel real economic pain,” Kirk said. “If we don’t cave to the cowards at companies like Salesforce, we will win.”

Ride-share companies Lyft and Uber, meanwhile, said they will pay the legal fees for drivers who face lawsuits for driving women to have their babies killed.

The heartbeat law relies on private enforcement, so individual citizens can sue anyone who helps a woman violate the prohibition on abortion once the heartbeat is detected, which is generally around six weeks’ gestation.

“This is an attack on women’s access to healthcare and on their right to choose,” Lyft CEO Logan Green said. Green also said Lyft will donate $1 million to Planned Parenthood, the nation’s large abortion vendor.

“Right on @logangreen – drivers shouldn’t be put at risk for getting people where they want to go,” Uber CEO Dara Khosrowshahi wrote on Twitter.

Tesla CEO Elon Musk, who has created thousands of jobs in Texas, said he does not plan to get involved in opposing or supporting the law.

Editor’s note: The author is a former employee of Turning Point USA.