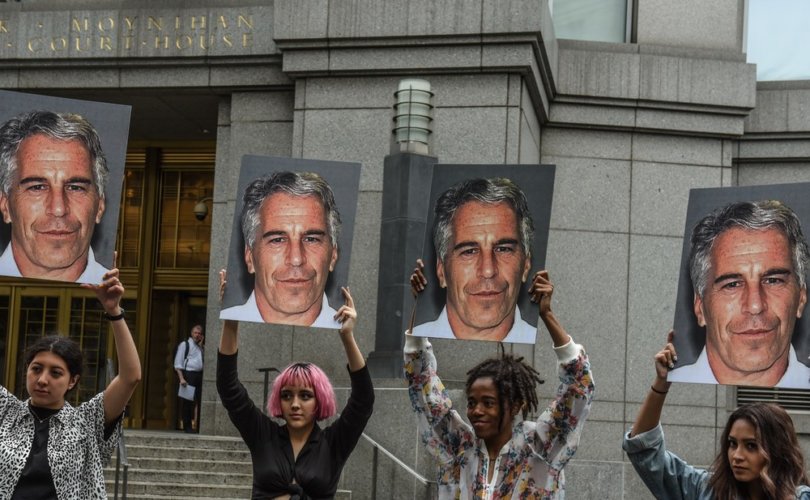 NEW YORK, July 25, 2019 (LifeSiteNews) ― A billionaire sex offender with ties to some of the most powerful people in the world is now on suicide watch in a New York jail.

Financier Jeffrey Epstein, 66, was found on the floor of his cell last night semi-conscious and with marks around his neck. He was taken from Metropolitan Correctional Center to a local hospital, and was returned after treatment.

Epstein is a close friend of Bill and Hillary Clinton who helped launch the Clinton Global Initiative in 2005. According to a 2016 Fox News report, court documents show Clinton flew on Epstein’s plane at least 26 times between 2002 and 2003, at times ditching the secret service. Clinton issued a statement last week denying any knowledge of Epstein’s “terrible crimes,” claiming that he only took “a total of four trips on Jeffrey Epstein’s airplane” from 2002 until 2003.

On July 8, Epstein was charged with one count of sexually trafficking a minor and one count of conspiracy to commit sexual trafficking. After investigators found $70,000 in cash, 48 diamonds, and a foreign passport with Epstein’s photograph but another name at his Manhattan home, he was deemed a flight risk and denied bail.

As famous for his A-List celebrity friends as for his sexual preference for underage girls, Epstein has inspired countless news stories since he was first charged for his sexual crimes in 2006. He pleaded guilty to procuring an underage girl for prostitution in 2008 and served 13 months in the Palm Beach county jail.

However, according to the most recent indictment, Epstein is charged with sexually exploiting dozens of underage girls at his New York and Palm Beach properties “among other locations.”

From around at least 2002 to at least 2005, Epstein “enticed and recruited” girls as young as fourteen to come to his home to give him massages. Afterwards he would induce his chosen victim to engage in sex acts. Afterwards, he would give his victim hundreds of dollars. In some cases, he paid his victim to recruit other underage victims, whom he also paid.

“In this way Epstein created a vast network of underage victims for him to sexually exploit,” the indictment charges.

Epstein’s activities were allegedly facilitated by employees and associates, some of whom actually contacted victims by phone to ensure that they were at Epstein’s Palm Beach home when he arrived there.

This case, too, has inspired much comment. In an article she wrote for the National Catholic Register, Dr. Jennifer Roback Morse of the Ruth Institute blamed the Sexual Revolution of the 1960s for the sense of entitlement possessed by such powerful men as Epstein, Hollywood producer Harvey Weinstein, and the former Cardinal Theodore McCarrick.

“The rich and powerful have always been able to buy their way out of problems that would crush an ordinary person. But the widespread acceptance of the sexual revolutionary ideology smooths their path,” she wrote.

“To an unprecedented extent, the reigning secular religion of our time enables sexual abuse, disarms victims and empowers predators.”