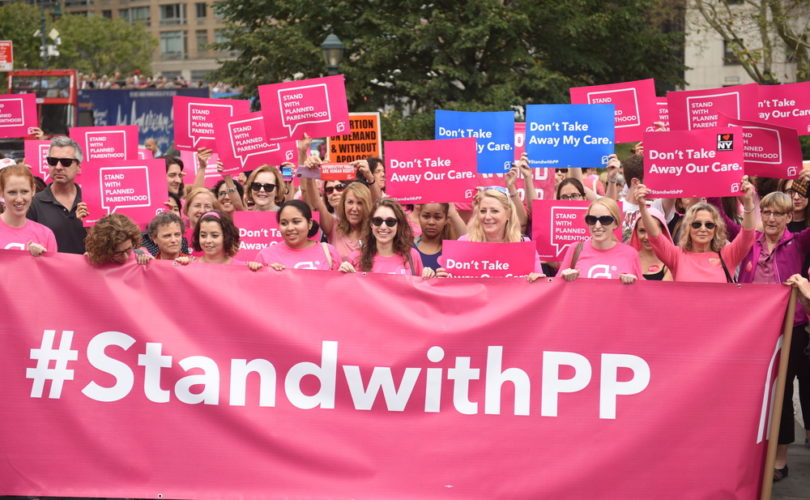 According to an internal document appearing on the DC Leaks site, Soros’ staff called for the emergency infusion because Planned Parenthood had already exhausted its lobbying funds on lawyers, crisis management, media buys, coaching patients, making pro-Planned Parenthood statements to the media, and organizing approximately eight million supporters nationwide to lobby individual members of Congress against defunding the abortion giant.

The document was referring to the Center for Medical Progress, established by pro-life activist David Daleiden, who posed as a middleman seeking to buy fetal parts produced by Planned Parenthood’s extensive abortion operation and covertly videoed numerous negotiations indicating Planned Parenthood officials were selling fetal parts and fetuses — for profit.

The adverse publicity was enough to prompt the Congress to defund Planned Parenthood, which receives $500 million a year for providing women’s health services. However, President Barack Obama vetoed the defunding measure.

While existing legislation now prevents any of that money from being spent on abortions, Democratic presidential hopeful Hillary Clinton has vowed to rescind that legislation.

The memo claims “an end to that funding would be devastating to the organization and the people it serves. … Defunding would mean that 1.6 million of their patients would be cut off from basic preventive services like contraception, cancer screenings, and STI testing and treatment. … Six in 10 women who visit these health centers consider Planned Parenthood their main source of health care.”

Interestingly, Planned Parenthood has admitted it provides no mammograms for screening breast cancer. As for the claim that Planned Parenthood is an essential health care provider, in 2015 the Alliance Defending Freedom and the Charlotte Lozier Institute released a map showing that community health centers outnumber Planned Parenthood clinics 20-to-1.

Chuck Donovan, the president of Lozier, told LifeSiteNews that President Obama’s Affordable Care Act provided $11 billion over five years to community health centers, allowing them to expand services and locations, making them more competitive than ever with Planned Parenthood. “They are attracting more clients while PP is attracting fewer.”

While Planned Parenthood focuses on women’s reproductive functions with contraception and abortions, Donovan said the community centers deliver a wider range of services, including mammograms and child health care.

The document was first published on DC Leaks along with thousands more from the Soros organizations. The Daily Beacon calls it “dark money” because it fits in a category of funding from philanthropic organizations to charities for open lobbying, which is not regarded by the Internal Revenue Service as charitable. Therefore, the donation is taxable, but it is also “dark” — Planned Parenthood is not required to publish the source.

Dark money in the United States has increased from less than $5.2 million in 2006 to more than $300 million in the 2012 election, according to OpenSecrets.org.

It appears the Open Society Policy Center did grant the money because one comment in the memo states, in the past tense, “This emergency funding enabled PPAF to implement its multi-pronged Fight Back Campaign to mobilize grassroots and grass-tops supporters and lobby Congress to counter attempts to defund Planned Parenthood at the federal and state levels, and to continue providing critical reproductive health care services across the country.”

But this might have been merely advice to the organization’s board about how it could explain the grant publicly if it were approved.

According to the Jerusalem Post, Soros’ funding targets are far flung and apparently unconnected. But the Post detects two themes: First, “their goal is to subvert Western democracies and make it impossible for governments to maintain order or for societies to retain their unique identities and values.”

And second, “As far as Israel is concerned, Soros-backed groups work to de-legitimize every aspect of Israeli society as racist and illegitimate.”

Soros has also funded groups aimed at undermining Catholic teachings. The leaks reveal Soros’ US Plan group gave $650,000 to the Jesuit-founded People Improving Communities Through Organizing group and to Faith in Public Life to use during last year’s visit to the United States by Pope Francis. One of the chief goals was to secure “buy-in of individual bishops to more publicly voice support of economic and racial justice messages in order to create a critical mass of bishops who are aligned with the Pope.”

According to the internal Open Society memo, Pope Francis wants PICO to host the World Meeting of Popular Movements, but “resistance to this inside the U.S. Conference of Catholic Bishops has been stark, and grantees are engaged in a live fight with a faction of the Church that seeks to curb the Pope’s influence on social justice issues.”