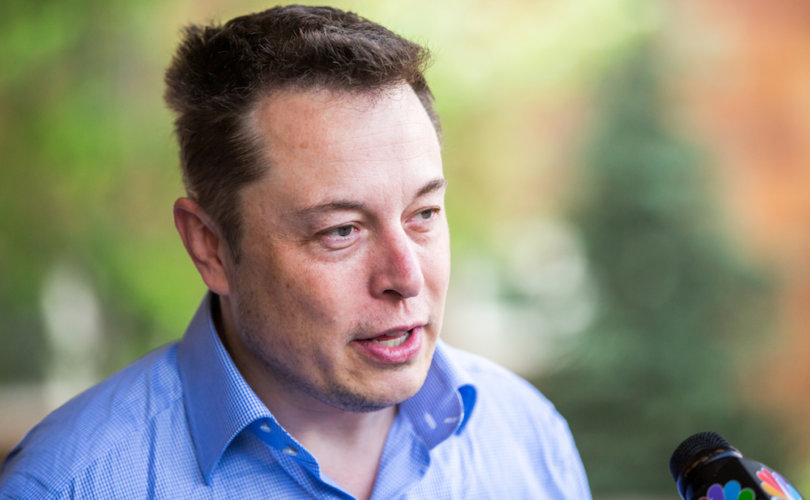 LOS ANGELES, California, July 31, 2017 (LifeSiteNews) – When billionaire Elon Musk tweeted about population growth earlier this month, some of his more than 10 million Twitter followers assumed he was lamenting “overpopulation.”

The Tesla CEO and SpaceX founder has funded research in Mars colonization and artificial intelligence, and he is regarded as an enlightened and enterprising entrepreneur.

So given that and the fact his tweet contained the words “population” and “collapse,” it was not a stretch to suppose he’d be tweeting about the planet having too many people.

However, Musk’s message was that some of the world’s countries are not replacing themselves in population and they are in danger of demographic collapse.

In saying so, he inadvertently communicated to his sizable audience what the pro-life movement has said for years: The problem is NOT that we’re having too many kids.

“The world's population is accelerating towards collapse, but few seem to notice or care,” Musk’s tweet said.

He was commenting on a November 2016 New Scientist article titled “The world in 2076: The population bomb has imploded.” The article projected a measured decline of global population over the next 60 years, because half of the countries in the world have fertility rates below the replacement rate.

Musk’s tweet in its intended context was then covered by a number of media outlets, albeit with the awkward task of how to package the narrative atypical of current accepted anti-population ideology.

But Musk has made similar comments before.

“We should be concerned about demographic implosion,” he told CNNMoney in a March interview.

Musk went on to describe an inverted demographic pyramid for CNN’s correspondent, where more people in older age groups are on top and how this is not sustainable.

“What we’ll actually have in those countries is a very high dependency ratio, where the number of people who are retired is very high relative to the number of who are net producers,” he said. “And so the social safety net will not hold.”

Musk’s analysis focused on the productivity of people in their respective demographics — not a measure of the value of life — but it does factor concretely into civic planning. Societies need future generations to logistically sustain themselves. Musk mentioned as well how immigration is not a feasible method of population replacement.

Musk may be an unlikely dispatcher of a pro-life message.

Indeed, in the CNN interview, he spoke of how we “sort of evolved to just procreate and there wasn’t birth control or anything,” as though this worldview is something from the past.

And he spoke of China’s one-child policy only in terms of its role in rendering the nation to its current state of non-replacement, with no mention of the horrible forced abortion element.

But his grasp of the economics and sizable platform enabled him to deliver the message that having too many kids is not the issue, and population control is not working.

“The full gravity of this is not well understood,” Musk said, “but will become a severe issue in the next few decades.”

His words ring true. Studies from demographers in recent years have repeatedly shown what pro-life advocates have warned about for years: An impending demographic winter in the west and other countries, arrived at through low fertility rates and abortion, is a very real threat.