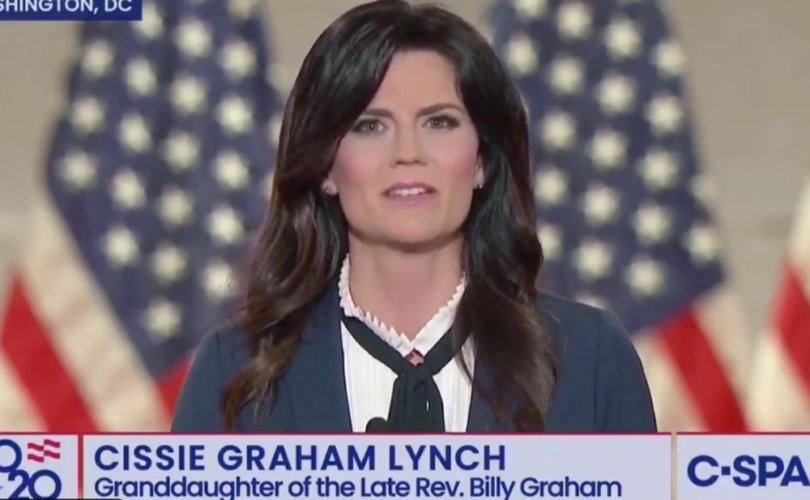 August 26, 2020 (LifeSiteNews) ― The granddaughter of America’s most famous evangelist praised Donald Trump last night as a “fierce advocate” of people of faith.

Cissie Graham Lynch, granddaughter of the late Rev. Billy Graham, spoke at the Republican National Convention last night to endorse the re-election of Donald Trump as President of the United States.

“As Americans we know that the first line of the First Amendment protects our freedom of religion,” Lynch said.

“But what we often forget is that the words are ‘free exercise of religion.’”

Lynch is a spokeswoman for the Billy Graham Evangelistic Association and its Samaritan’s Purse medical charity. She explained that ‘free exercise of religion’ means that Americans are free to live out their faith in their daily lives: “in our schools, in our jobs, and yes, even in the public square.”

“Our Founders did not envision a quiet, hidden, faith,” Lynch said.

“They fought to ensure that the voices of faith were always welcomed,” she continued. “Not silenced, not bullied.”

During the Obama-Biden administration, freedom of religion was under attack, Lynch said. She stated that Democrats had tried to force faith organizations to pay for abortion-inducing drugs, adoption agencies to violate their beliefs, and schools to allow boys to use girls’ locker rooms and compete in girls’ sports.

“But then ‘We the People’ elected Donald Trump,” Lynch said, smiling.

“People of faith finally had a fierce advocate in the White House.”

She explained that the president has appointed judges who respected the First Amendment, supported religious beliefs in court, protected the conscience rights of religious ministries, and “withdrew policies that put our little girls at risk.”

Lynch also praised Trump for having become the “first president to talk about the importance of religious freedom at the United Nations, giving hope to people of faith around the world.”

The Billy Graham Evangelical Association spokeswoman said that whereas Americans had not suffered “physical” religious persecution, they have experienced left-wing attempts to silence them and ban church services during the coronavirus pandemic “while marijuana shops and abortion clinics were declared essential.”

“But you know what is truly essential?” Lynch asked.

“Our right to worship freely, and live our faith in every aspect of life.”

She stated the the Biden-Harris “vision for America leaves no room for people of faith” and alluded to court cases in which Christians have been punished for praying or refusing to provide services for same-sex “marriages.”

“Whether you’re a baker or a florist or a football coach, they will force the choice between being obedient to God and to Caesar because the radical left’s god is government power,” Lynn said.

“In the words of my grandfather Billy Graham, let us stand for political freedom, moral freedom, religious freedom and the rights of all Americans, and let us never give in to those who would attempt to take it from us.”