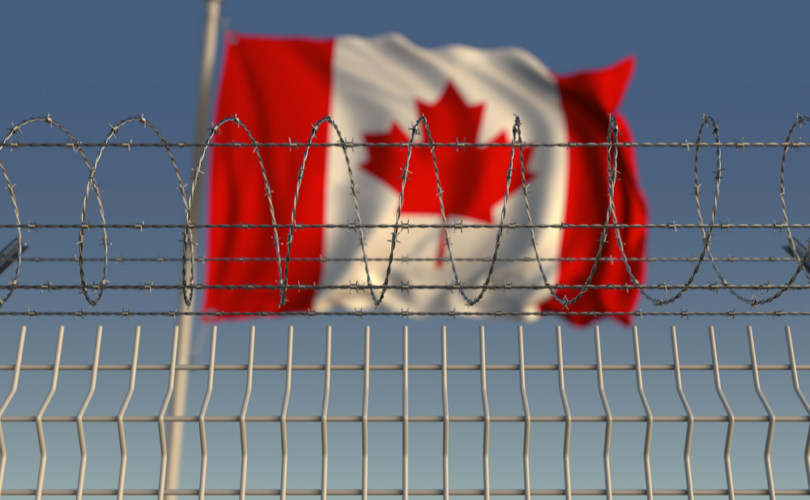 OTTAWA (LifeSiteNews) – Canadian biological males who “identify” as “women” are now officially allowed to be transferred from a men’s prison to a women’s if they ask and their request is approved.

According to a recent directive from the Correctional Service of Canada (CSC), the new policy released Wednesday states that inmate transfers will be allowed regardless of “gender identity or expression.”

“After completing the intake assessment process, offenders will be placed according to their gender identity or expression in a men’s or a women’s institution, if that is their preference, regardless of their sex (i.e., anatomy) or the gender/sex marker on their identification documents,” the directive states.

The directive, which is titled “Commissioner’s Directive 100 Gender Diverse Offenders,” states clearly how the transfer process is to take place. It also mandates that correctional staff take “gender diversity” training.

The Commissioner’s new directive states that male inmates who want to be housed in a women’s jail will have to undergo an assessment process before the transfer is approved.

Since taking office in 2015, the Liberal government of Prime Minister Justin Trudeau has pushed heavily both pro-abortion initiatives as well as those in favor of radical LGBTQ ideology.

Indeed, in 2017, Trudeau said that his government would pledge to recognize that “trans rights are human rights and we need to make sure we are defending everyone’s dignity and rights in every way we can.”

Also that year, biological males who self-identified as a woman were allowed under an interim basis by CSC to be placed in female jails.

The recent directive makes more or less permanent the policy of allowing an inmate, regardless of birth sex, to choose a men’s or women’s jail if they “identify “with another gender.

Despite many women’s rights groups being very much pro-abortion as well as pro-LGBTQ, many have blasted the move to allow biological men into a women’s jail as a threat to one’s safety.

In a recent True North report, Heather Mason, a former federal prisoner and spokesperson for Canadian Women’s Sex-Based Rights, said that female prisons will have to increase security as a result of a man’s more aggressive tendencies.

Mason noted that women’s jails have fewer “security measures” and there are no “weapons” but only an “eight-foot fence.”

Mason said that a “high proportion of males in maximum security” are “looking to transfer, so this is going to impact Indigenous women the most.”

“As you know, 50% of our prison population are Indigenous and also approximately 50% of the women in maximum security are Indigenous,” Mason said.

“They originally released a policy that would still transfer based on sex, except they changed the requirements for gender reassignment surgery,” Mason noted.

She added that it was at this time “Trudeau himself at the town hall meeting who was like, ‘Oh, I never thought about that, we’ll change it.’ So it definitely was a Liberal Justin Trudeau thing.”

There have been instances of women being sexually assaulted in Canadian jails by biological male inmates.

A recent Parole Board of Canada (PBC) decision revealed that a female prisoner was frequently sexually assaulted by a biological male, who was allowed to be jailed at the Grand Valley Institution for Women in Kitchener, Ontario.

This resulted in recent protests at multiple jail locations in Canada, as well as some in the U.S., which in few states allow “trans women” to be housed in male prisons.

In recent months, biological men competing in women’s sports have taken the spotlight, notably after college student William Thomas, who says he is a woman called “Lia,” made waves by competing against women in National Collegiate Athletic Association (NCAA) swimming events.

Many U.S. states have banned or are looking to ban “trans women” from competing in women’s sports

The adoption of what are termed “trans-inclusive” pronouns has been heavily promoted by those in the LGBTQ movement. This is despite the hard reality of one’s biological sex, as well as many people’s religious beliefs that hold that God created “man” and “woman.”

This is also even though, statistically speaking, only 0.33 percent of Canadians identify as  “transgender” or “non-binary,” according to recent data.

The attack on the family along with the rights of parents has been increasing steadily over the past few years, notably in Western nations such as Canada and the United States.

Some Canadian provincial governments, such as that of British Columbia, are even purging from their law books references to both “mother” and “father,” along with all references to a person’s sex.

Recently, Conservative MP and leadership contender Leslyn Lewis promised that if elected leader of the party she will put forward “a bill protecting parental rights,” noting that Canada needs a government system that supports families instead of “tearing them down.”